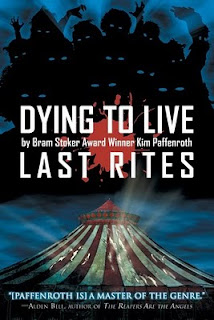 Lucy and Truman, 2 intelligent zombies from DYING TO LIVE: LIFE SENTENCE, open this 3rd installment of Paffenroth's undead saga aboard a small boat. They're traveling with Will and Rachel, two humans who have learned to trust them (although Rachel is a bit more apprehensive than Will). They find a dock outside of a walled-in city named New Sparta. Will and Rachel are allowed to enter so long as they hand their 2 zombie companions over to the city to be used in their undead labor force. Lucy and Truman agree to this, despite figuring there will surely be rough times ahead.

Will and Rachel quickly adapt to their new home: they're given a nice little house and each of them find jobs (Rachel on a construction site, and Will with a group of men who leave the city to keep wandering zombies at bay). They become friends with their neighbors (a couple about their age with a baby), and while Will looks forward to getting back on the water, Rachel begins to grow comfortable, enjoying all the comforts available to them in New Sparta.

Things aren't so good for Lucy and Truman. She's forced to work with a group of fellow zombies who (like Will's job) also go outside the city looking for undead threats, and Truman winds up as the new "smart zombie" attraction at a local circus. When he gets tired of the way the human handle him, he rebels, and is punished via electrocution for spectators to see.

When Rachel goes with her neighbor to the circus and sees Truman being tortured, she becomes convinced the citizens of New Sparta are more savage than the zombies and agrees with Will that they need to leave...after they try to rescue their zombie friends.

While I've been enjoying Paffenroth's unique apocalyptic series, this 3rd novel--while emotionally the richest of the series--felt more like an unusual drama than a horror novel. That's not to knock it--I'm sure fans of the series will enjoy this, despite the absence of some favorite characters from the past two books (my favorite character from the 1st novel, Milton--barely seen in the 2nd--isn't even mentioned this time). Also, the religious aspect that made the first novel so memorable is barely touched on, although Paffenroth does make up for it with his contemplations on the human (and undead) condition in a way that'd make (even) George Romero jealous.

I strongly recommend new readers read the first two novels before trying LAST RITES. There's some zombie goodness here and there, along with a few tense scenes, but fans of the zombie subgenre looking for an all-out gut-muncher might be disappointed.

I'd like to see a return (and an expansion) to the religious themes of the first novel should Paffenroth deliver a 4th, but regardless of which direction this series may take, readers can bet that whatever the author comes up with, it won't be the same old generic zombie story. And for that alone, LAST RITES is worth any zombie fan's time. 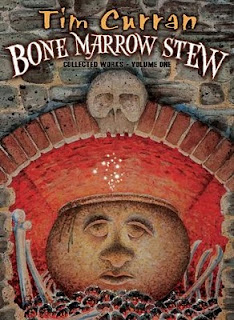 BONE MARROW STEW is a fantastic short story collection from Tim Curran. With stories ranging from a man who can resurrect the dead in Paris, a theoretical physicist who sees into another dimension, the people caught in the middle of a migration of epic proportions on a mining colony and the things the men on a prison road crew actually do, there is something here for everyone.

My favorite story in the collection (although it’s hard to choose) is "The Chattering of Tiny Teeth" about the things seen on a muddy, trench-filled battlefield in Flanders during World War I; it’s so much worse than the dead, dying and usual horrors of war. Another favorite of mine is "Queen of Spades" about a group of children trying to scrape out an existence in a bombed out city during World War II; what’s come looking for these children may be worse than the Nazi soldiers they were able to hide from. And how could I possibly leave out "The Legend of Black Betty", a tale about zombies and voodoo in the Old West.

Other great stories include "The Puppeteer" about the things that puppets may be able to do when no one is looking; "One Dark September Night…" about the scars one man has carried from a night with his friends; "The Architecture of Pestilence" about a snake-oil salesman and the consequences of his actions; and "Reign of the Eater" about the bringer of death….this one reads like dark poetry.

BONE MARROW STEW is an amazing collection. Tim Curran has a way of writing that draws you into the story--it’s as if you’re really there. You can almost hear the sounds and smell the smells. His prose is descriptive, dark and visceral. The introduction by Simon Clark and artwork by Keith Minion (the cover was designed by Deena Warner) just add to the collection. If you’ve never read anything by Tim Curran this is a good place to start. Have I mentioned that I’m a huge Tim Curran fan? 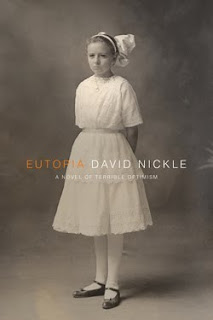 Sometime in 1911, Jason Thistledown's mother dies. He keeps her body in a barn and does his best to survive the rest of the snowy winter on their isolated pig farm. As soon as spring approaches, an aunt he didn't know he had shows up and explains that his mother has died of a strange illness. Jason's Aunt Germaine then takes him away from his hometown (where he learns everyone has died of the same illness) and brings him to a mountainous area of Idaho known as Eliada.

Meanwhile, Eliada is having its own problems: The Ku Klux Klan are about to lynch a negro doctor (Andrew Waggoner) who they apparently don't want working in ther hospital. But before they hang him, Dr. Wagoner sees another person about to be hanged--a strange-looking man who we later find out is a patient at the hospital's quarantine ward. Dr. Waggoner is rescued at the last minute by Sam Green, a man hired to keep order by Garrison Harper, who has set up this smal town according to his own ideals.

When Jason arrives in Eliada, it doesn't take long for Nickle to get the suspense going: his aunt allows the head doctor, Dr. Bergstrom, to place him in quarantine to make sure he isn't carring the germ that killed his hometown. After waking up strapped to an operating table, and surviving an attack by small demonic-looking creatures, Jason begins to wonder who this mysterious aunt is and why she has brought him here.
There's so much that happens after this simple premise I don't know how Nickle managed to keep the rest of the novel so tight. There's fantastic atmopshere throughout as conspiracy theories abound in this fresh take on the small-town-harboring-ancient-evil theme (at least I'm assuming the evil here is ancient). Readers will be thoroughly taken with Jason (son of an alleged gunslinger) and Dr. Waggoner (not to mention a potential germ-warfare subplot) that by the time the creatures come fully into play, they won't be taken as the goofy imps of your standard pulp novel. EUTOPIA is as frightening in its social message as it is with its religious themes, and features irresistable prose.

While EUTOPIA doesn't hit the reader over the head despite everything going on, its slow-building tension works well with several pay-offs as the end approaches, and the many subplots never slow the story down--but enhance it. A top-notch novel all around.

For MORE SPRING INTO TERROR recommendations, please visit:
MONSTER LIBRARIAN﻿
﻿
Posted by Nick Cato at 5:22 AM