It's been a LONG TIME since we've had a horror fiction magazine update, and as some of you may know, reading through a copy of BLACK STATIC or CEMETERY DANCE can take almost as much time as getting through a small novel.  Now let's get down to business... 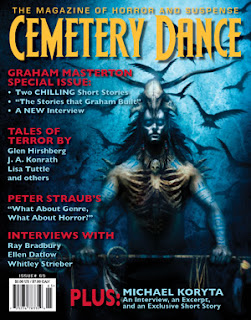 I'm among the legion of fans who often complains about the long delays in-between issues of CEMETERY DANCE, but once again Richard Chizmar and co. have delivered not only an outstanding magazine, but their largest issue yet with no. 65.
Graham Masterton fans should have this on their must-read list as it includes a lengthy interview (conducted by J.A. Konrath) as well as two fantastic Masterton short stories, as well as two more non-fiction pieces.
This issue's other memorable fiction offerings include a heartbreaking urban terror tale from Maurice Broaddus, Lisa Tuttle takes a most unusual look at a relationship in 'Manskin, Womanskin,' and David Bells' 'The Book of the Dead,'  features another relationship-themed story about a Japanese woman dealing with the death of her American husband (this may be of interest to fans of The Beatles---and no, the protagonist is not Yoko Ono!).  Of the ten stories included here there wasn't a sour one in the batch.
The usual features include plenty of Stephen King info. in Bev Vincent's famous 'News from the Dead Zone' column, another great installment of Thomas Monteleone's 'The Mothers and Fathers Italian Associtiation,' plus plenty of interviews (including Ray Bradbury, Ellen Datlow, and Whitley Streiber) and another crop of book reviews that (somehow) seem more current than in past issues.
Order a copy at: CEMETERY DANCE Issue 65 The 25th issue of BLACK STATIC (Nov. 2011) kicks off with two nifty film columns, then Mike O'Driscoll takes a look at Justin Cronin's THE PASSAGE.
The fiction comes fast, dark, and heavy with Alison Littlewood's 'About the Dark,' a claustrophobic look at what befalls a few friends who investigate the legends of a a local cave.  Latent Apprehension rules tenants during an apartment blackout in Christopher Fowler's 'The Curtain Parts,' and Ray Cluley's eerie 'The Travellers Stay' follows a family's experience at a run down motel.  Barbara Barnett also delivers a (lengthy) winner, while Nathaniel Tapley's short 'Best Summer, Ever' is basically a humorous look at a business letter--perhaps a bit out of place in BLACK STATIC, but entertaining nonetheless.
Peter Tennant reviews several horror novels with a historical niche, than delivers an informative interview with author D.F. Lewis, then Tony Lee's boat-load of DVD reviews caps off another high-quality issue.
Order a copy here: BLACK STATIC Issue 25 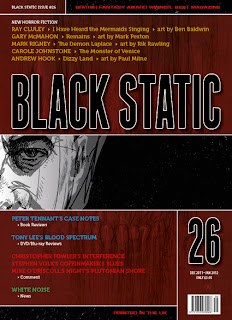 In the 26th issue of BLACK STATIC (Dec 2011/Jan2012),  the three opening comment columns are highlighted by Christopher Fowler's brief coverage of the 12th London Frightfest, as well as the latest British Fantasy Society Convention.
Among this issue's five fiction pieces, Gary McMahon's 'Remains,' stuck with me the longest, and will cause you to make sure your bones are in proper working order; Andrew Hook's 'Dizzy Land' tells the odd tale of Hunter, who is attempting to develop a park comprised of vintage carnival rides; and Ray Cluley (featured for the second issue in a row) strikes with 'I Have Heard the Mermaids Singing,' a rich, unique, haunting piece dealing with fisherman and writers.
Mark Rigney and Carole Johnstone deliver solid stories, although Johnstone's ending is quite depressing so be forewarned.
Peter Tennant focuses his book reviews on anthologies and collections before hitting stand-alone novels (there's quite a few covered here).  And while I always look forward to Tony Lee's DVD reviews, this issue he was negative over every film covered (I'm assuming he just didn't get the twisted, comic-book like nature of HELLDRIVER?), but at least he praises the 10th season DVD collection of SMALLVILLE.  (Wait--isn't BLACK STATIC supposed to be a horror magazine?  I understand there's somewhat of an occultic theme in some episodes, but seriously---let's try to keep things away from super heroes (unless, of course, we're talking THE TOXIC AVENGER!).)
Fun stuff.
Order a copy here: BLACK STATIC Issue 26
Posted by Nick Cato at 9:17 AM 2 comments: