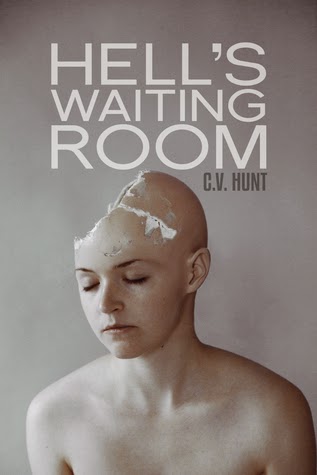 Greg and his wife (who goes by many names) find themselves without power in their home. Greg,a semi-conspiracy theorist, has been expecting something like this so isn't as worried as his wife. He knows they can live off the food in their garden, and cold showers don't bother him.

But when Greg becomes ill and needs medicine, his wife ventures to a neighbor's house and they make Greg a home remedy. The neighbors are a strange bunch, and no one knows if the power outage is a local thing or a larger problem.

As Greg's health worsens, his wife (whose viewpoint the story is told through) becomes more paranoid and Hunt reveals her true nature through several clever and surreal situations.

HELL'S WAITING ROOM is a nifty take on the end times, conspiracies, and mental health. It's a quick read, full of darkly comic situations and enough weirdness to satisfy anyone looking for an off-the-grid tale. 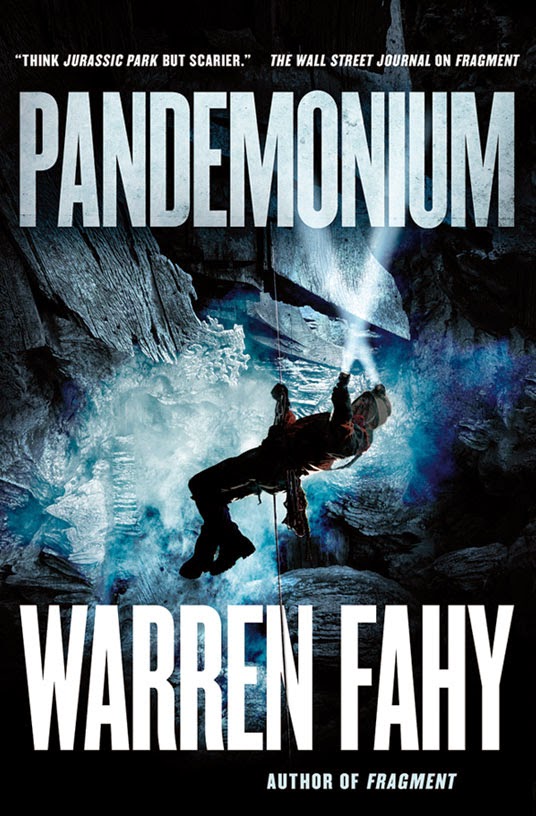 You know the little joke going around about wanting to take this relationship to the next level, it’s an underwater level, (bleep) I hate those? Except for the hating it part, and if we mostly substitute ‘underground’ for ‘underwater,’ that fits this book. A direct sequel to FRAGMENT, it takes the experience to whole new levels!

The tricky part for me, the reviewer, here … describing the second book without doing too much in the way of spoilers for the first. Go read it, or at least read my review. I’ll wait.

Done? All rightie, moving on! We rejoin some of the survivors of the ill-fated explorations of Henders Island (but I won’t name names!) after the spectacular revelations at the end (which I won’t tell you here, neener-neener!).

They’ve been invited to visit another hidden, separate, almost alien ecosystem on Earth … this one not in the middle of the ocean but half a world away, in a network of incredible caves deep below Russia. It’s more extremophile species to discover, more breathtaking natural wonders and terrors!

Aaaaaaand it’s run by a megapowerful maniac who would make an excellent Bond villain. Once our protagonists have taken him up on his offer, they find out that leaving the subterranean cave-city complex may be a little harder than they anticipated.

It is impressive, though. It’s also got a history of enforced labor worked to death, paranoia, revenge, ghosts, and other weirdness. Plus, windows into a vast underground sea where yet more strange bioluminescent life forms cruise through the silent dark.

Obviously, things have got to go horribly wrong, and they sure do. Not the least of which is when organisms from Henders Island somehow get loose in the caves … and when a conspiracy unfolds to try and take out some of the more noteworthy survivors because of the threats they might represent to humanity.

I can’t tell you more without giving too much away but it’s thrilling adventure, wild good fun, some squee-worthy moments, and a few bits of shocked “Oh-you-did-NOT-just-DO-that!”

Get them both. Read them both. Then you’ll see why when I say ALL the thumbs-up, it’s a LOT of thumbs! 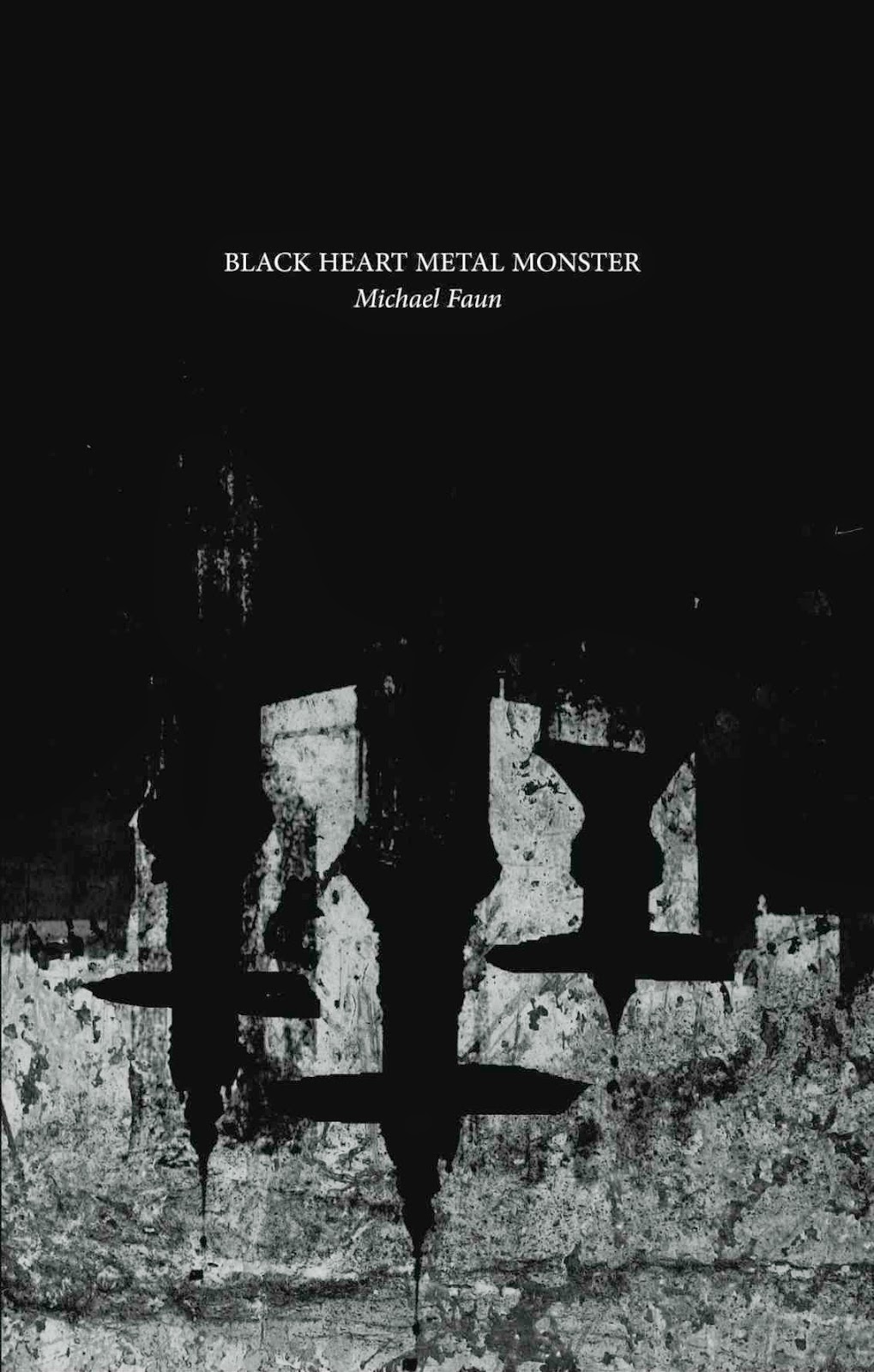 What does Black Metal and limited edition chapbooks from Dynatox Ministries have in common?  Well, the answer is quite simple. Absolutely nothing. But that’s not entirely true anymore. Not with a copy of Michael Faun’s Black Heart Metal Monster sitting gently in the palm of my hand.

The book description reads, “Black metal meets horror in this novella by Swedish Cult Author, Michael Faun. What inhumane acts cause an unblemished heart to grow black and putrid? How does Satan's influence manifest itself, when invoked where the Christian illusion has cracked? One Band, One House, One Heart Horror Fiction for Black Metal fans.”

But this doesn’t do the book enough justice. As I followed along a gripping tale about some dudes in a Black Metal band, I became aware of something.  One thing. And that is this; Michael Faun is an absolute beast of a writer. The guy eats, sleeps, and dreams visions only some of us wish we had (and the numbers are few and far between). But, not only does he do this, he writes with a heart of gold, expressing as much concern for the reader as necessary, and really knows how to craft a golden tale. He takes the reader on an epic journey alongside the band. Some real class acts by the name of Throatbutcher, Ateranimus, Skinreaper, and Nex. Faun manages to spin a tale as beautiful as it is unsettling, as black as it is metal, page after page. A couple things to expect in this novella would be, flailing guitars, DOOM, serpents, blood and guts, heart, and a soul blacker than perhaps the Devil himself, while snorting a pentagram into one of his nostrils.

If you’re looking for something to read with a literary value that pays refuge to Black Metal music, Darkness, or Satan himself, BLACK HEART METAL MONSTER hits just as hard as Joel Lane’s classic rock and roll/grunge debut BLACK AND BLUE. This dark little gem right here is your jam, especially if you’re in a band. 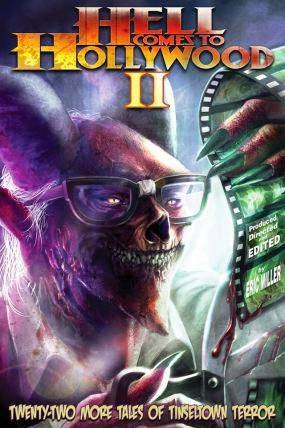 I missed the first volume of this tinsel town-themed anthology, but apparently it did well enough that a second helping of 22 (mostly) new stories was in order. Edited by Eric Miller (whose screenplays include ICE SPIDERS and DOG SOLDIERS II), most of the contributors here are screenwriters, but a few names will be familiar to horror fiction fans.

Among my favorites are 'The Crimson Marquee,' about a woman who finds her destiny at an old Hollywood revival theater (written by Anthony C. Ferrante, director of the infamous SHARKNADO films: he wields his pen much better than his camera). In Lisa Morton's slick 'She Devil a Go-Go,' a director with a secret meets his match, and in 'The Voice Coach Cometh,' an actress meets a strict voice coach and her failed students in one of the creepier stories of the lot.

In 'Buried!" a washed up actor gets another chance on a crazy new reality show. If you're claustrophobic stay far away from this, but man is it good. 'The Devil's Friends' is a hilarious comedic horror tale about a b-movie director making a deal with Satan to become one of the greats, while in Hal Bodner's 'Hot Tub' a malevolent entity turns a handsome guy into a star. It's another darkly comic yarn and one of the strongest of the book.

'Welcome to the Jungle' features an actress taking a job on a cheap horror film and discovering why the film's monster looks so authentic, and 'The Scottish Play' follows a couple as they open a haunted theater. It's one of several ghost stories here and also one of the best. Editor Eric Miller strikes with 'Culling the Herd,' where the owner and protege of a zombie ranch confront a creature-rights activist. It's quite funny and just plain fun.

The book ends with 'Dreams of a Little Suicide,' which any fan of THE WIZARD OF OZ will drool over. A midget from Wisconsin goes to Hollywood in 1939 to be a munchkin in the film. He falls in love but things don't work out the way he wished. Written by Eric J. Guignard, it's easily the one tale here you won't soon forget.

I found the majority of the other tales to be so-so and predictable (one titled 'Careful What You Wish For' doesn't even follow the book's theme), but the tales mentioned above are well worth your time. Good stuff, especially those featuring a comedic angle.