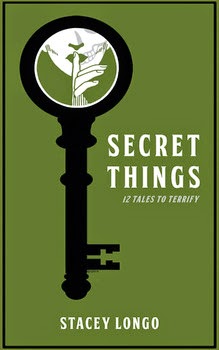 This collection of 13 tales (8 presented here for the first time) deals with secrets that can sometimes have fatal consequences, and along with chills you'll find some finely-blended in humor.

The opening title tale is a short and sweet revenge yarn with a neat twist ending. 'Good Night, Francine,' shows what can happen to a snobby old woman, while 'Time to Let Go' is a solid, quiet ghost story about lost love.

'Cliffhanger' is not recommended for those afraid of heights (::raises hand::) and 'Josephine' features another elderly protagonist as she contemplates a former crush. I keep saying I'm sick of zombie stories, but 'Love Stinks' brings the laughs along with the grue. One of my faves of the collection.

SECRET THINGS is then interrupted by 'Interlude: a Tale That Failed,' a neat little rib-tickler that leads us into 'Trapped,' yet another one featuring an elderly woman who finds herself in a desperate situation during a major blizzard. 'Max Elliott, Exterminator' shows us what a zombie hunter does now that the apocalypse has ended, then we get into my favorite of the collection, 'People Person,' about a young woman who can't seem to fit in anywhere ... even on a sparsely populated, isolated island. It's like a mix of THE WICKER MAN and EATING RAOUL...

'Mother's Day' is another undead-fueled caper featuring a very stubborn antagonist, then 'Denny's Dilemma' is a heartbreaker about a relationship that could have been. Longo wraps things up with 'Woman Scorned,' where a cheating boyfriend is dealt with in a clever manner.

A couple of stories in SECRET THINGS might not be considered "horror," but the author keeps everything dark and mysterious. Even when something feels a bit familiar (such as in 'Mother's Day,') Longo manages to pull an ace at the last minute and give things her own angle. Good stuff. 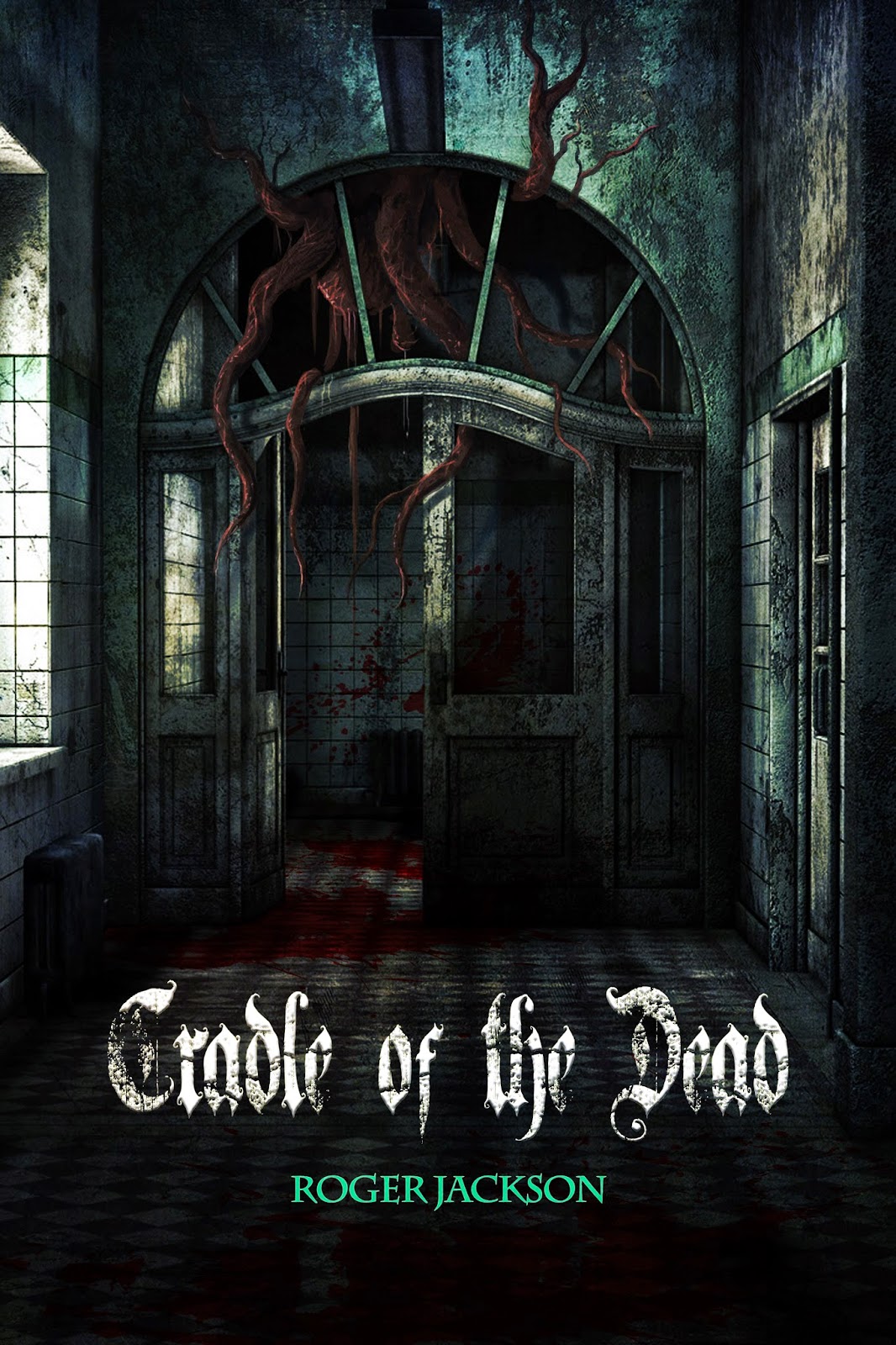 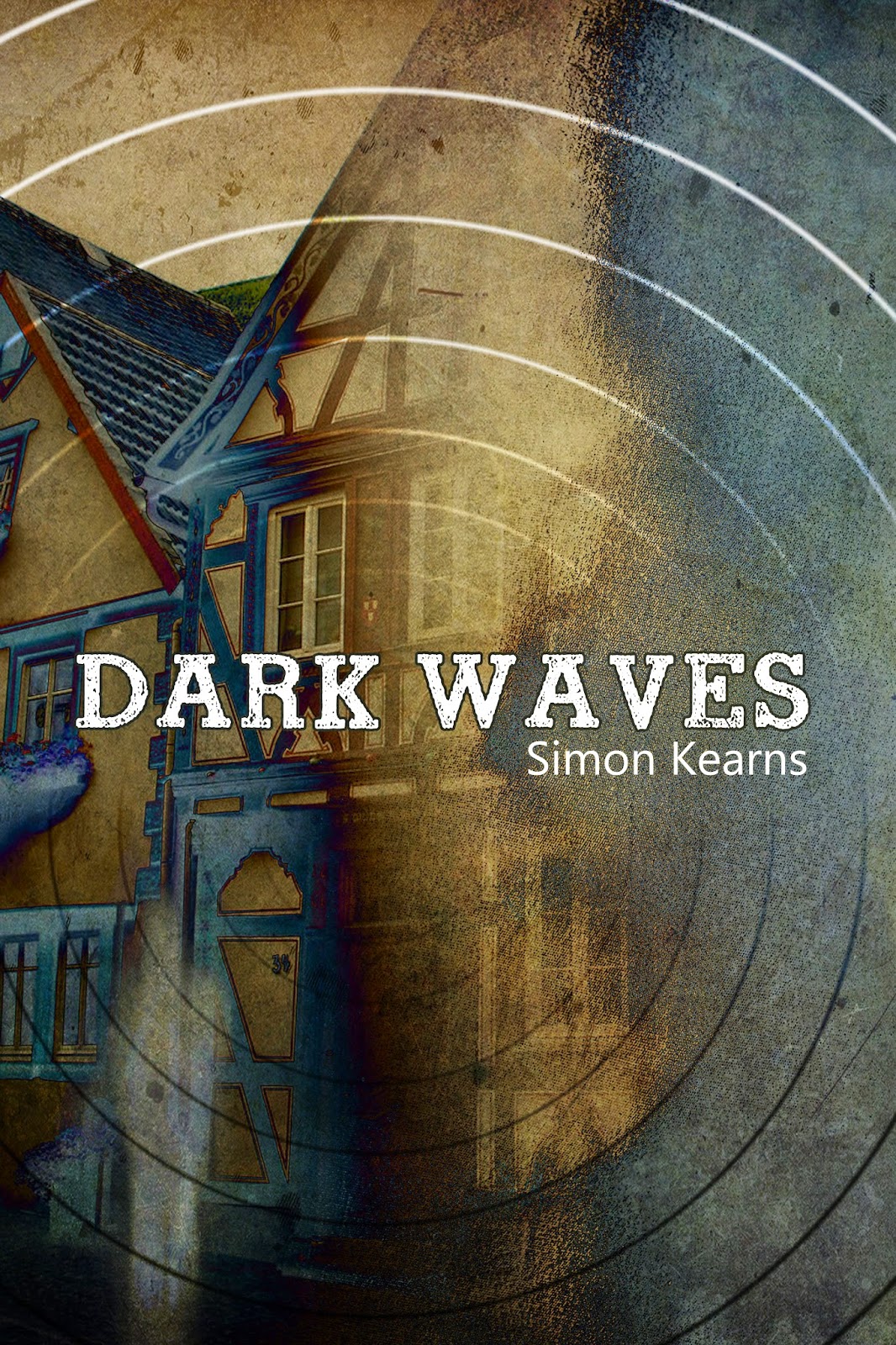 I’m old enough and hoarder enough to actually still own several of those ancient twofer paperbacks, the kind with two stories in and you’d turn the book over. Being asked if I was interested in reviewing a modern take on that, you can believe I wasted no time saying yes.

Now, you might wonder if this would get tricky, given ebooks and all. Would I have to upend my screen? Read upside down? As it happens, no. And, bonus, it removes any angst over which way to shelve it!

What it does mean is two quick, pulpy-fun reads in one! They share a similar overall theme of places with bad and/or haunted histories – an abandoned asylum in CRADLE OF THE DEAD, and a quaint old inn in DARK WAVES – and the ways the evils of the past can reach out for revenge.

I initially thought, based on title alone, that DARK WAVES would turn out to be one of those oceanic horror stories, with adrift lifeboats, sharks, starvation, etc. Instead, I got The Dawlish Inn, and since I’m a history geek with a particular fondness for the British Isles, hey, that was even better! I lingered, reading and re-reading the descriptions and details of the inn, far longer than any normal person probably would have done.

The inn, of course, is believed to be haunted. The protagonist is not exactly a ghost-hunter, but a scientific acoustic engineer – those waves? sound waves, durr – who’s been studying the physical effects certain vibrations can have. By disrupting those, he’s ended more than a few ‘hauntings.’ He expects that his new assignment to check out this inn will be no different.

(also, the chocolate? brilliant, love it; a legit psychopharmalogical explanation for post-Dementor treatment!)

CRADLE OF THE DEAD takes the abandoned-asylum setting but doesn’t toss in urban explorers or anybody digging into whatever atrocities went on there … it’s a handy, isolated place for a local crime boss to bring the people he needs to deal with. There’s even a potter’s field for body disposal.

Of course, when the crime boss decides one of his own men has to be eliminated, that poor guy already has a good idea of what’s waiting for him. But, little do any of them know that Alderville Asylum has been harboring its own other secrets, and the time has come for those secrets to be revealed. Soon, the chase is on, as would-be victims try to escape their captors, and the captors themselves are beset by worse threats.

Each book alone is a worthy, enjoyable read. Together as a package deal, you definitely won’t be going wrong. 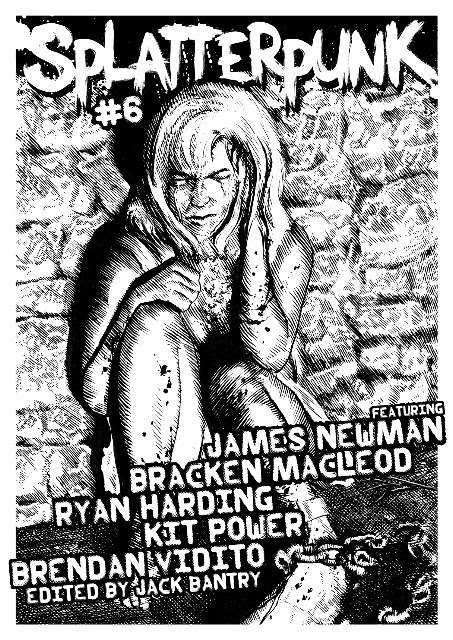 SPLATTERPUNK is a fairly new ‘zine published in the UK.  It’s not fancy – it’s just plain printer paper stapled together, like so many ‘zines back in the “old days” before the Internet. But make no mistake – this publication packs a nasty punch.

“Fuck Shock” by Brendan Vidito and “Lifeline” by Kit Power are both stories that will make the reader’s skin crawl – and both have consequences in regards to sex, either having it or thinking about it. But which character gets it worse?

The columns are fun to read. From Kit Power writing about extreme horror as a squeamish fan, James Newman giving a list of non-horror movies with unsettling moments, to John Boden’s journey as a horror fan from childhood to now, all are interesting and well-written.

The editor, Jack Bantry, gives a list of his favorite splatterpunk novels throughout the years, which should inspire readers to check them out.

I hope this ‘zine grows – it deserves a wide audience. It’s encouraging that there are already six issues, and I don’t see any signs of it folding. The small press is tough, so check this ‘zine out. Buy it, and tell your friends!

This issue was dedicated to the memory of J.F. Gonzalez, a wonderful horror writer who recently left us way too soon. 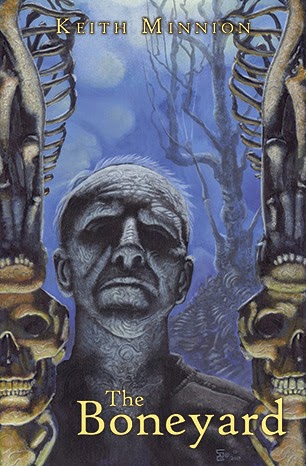 In Minnion's novel THE BONE WORMS, Detective Fran Lomax is investigating a series of unusual and gruesome murders in the Philadelphia area. Mutilated bodies are being discovered with their bones missing, and the corpses are left with precision-quality scars that suggest a master serial killer is at work. But the more Lomax digs in, the stranger the case becomes.

On the other side of town, two senior citizens (who have been friends since they were children) share an apartment, one protecting the other from a bizarre situation they shared back in the early 1920's. Like the victims Lomax is dealing with, each of these men are physically scarred, and each one knows who (or what) is responsible for the recent rash of murders.

Minnion's blend of supernatural horror and police procedural is packed with suspense, gut-wrenching violence, and good, old-school horror that will keep fans glued to the pages. As a bonus, the short story on which the novel was based, UP IN THE BONEYARD, is included. With cover and interior artwork by Steven Gilberts, THE BONEYARD is a slick package that's highly recommended. 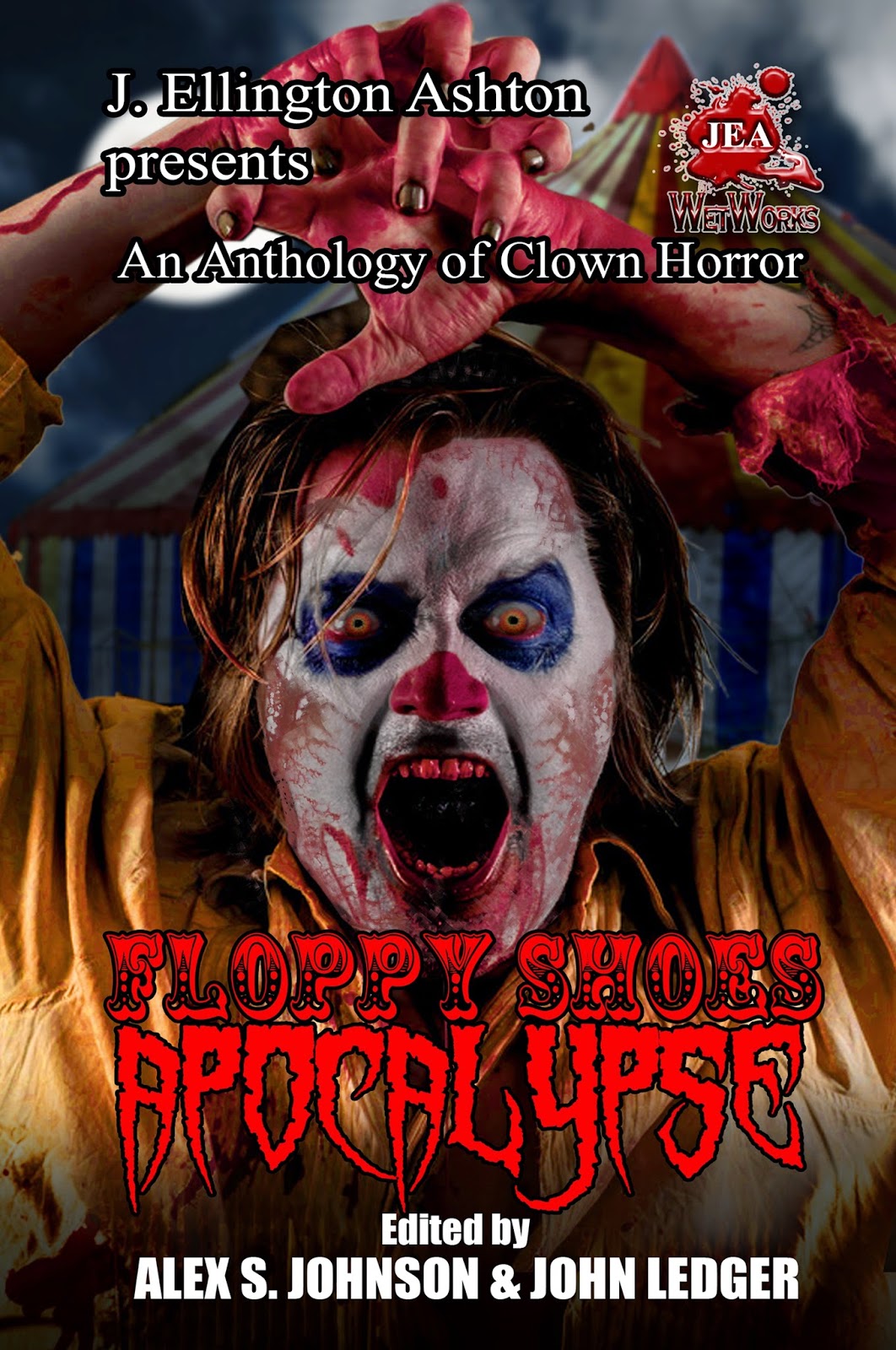 “A Clown Horror Anthology” is what it says, and yes indeed that’s what you get. Clowns. Yeesh. I mean really, think about it, loads of people are scared of spiders or snakes, too … but you don’t generally have them at your birthday party, featured prominently in toys and nursery décor, or cavorting down Main Street in a parade.

There’s a strong tendency to blame Stephen King for it. Exhibit A: Pennywise; case closed. Except, no, we’re shooting the messenger there. King didn’t create or cause the phobia; with Pennywise, he tapped into what was already there. Same with that awful cymbal monkey. I was scared of those long before I read his story.

But, I digress. I am not writing an intro for this book. Nor do I need to, because it’s already got one, a bang-up good one by Magan “Lovey” Rodriguez. Who is – prepare yourselves – one of them. An actual clown. The introduction delivers such an entertaining slice of history with psychological and literary overviews that I for one would read an entire book on the subject. I learned some stuff! I was intrigued enough to want to go learn more stuff! In the intro to a clown horror anthology! Maybe it’s just me, but I found that pretty cool.

And then there are the stories, seventeen of them, beginning with a bouncy little poem. Mary Genevieve Fortier’s “Every Nine and Twenty” has such a catchy rhyme and rhythm that you could easily imagine it being chanted at skip-rope, if you like your skip-rope rhymes featuring blood, blades, eyeballs and entrails.

Many of the stories share some common elements – beyond, y’know, that of clowns, which is a given. There are greasepaint serial killers, characters with memories of horrible things done to them as kids by clowns, evil traveling carnivals, circuses of the damned, and so on.

One of my personal standout pieces is Aaron Besson’s “Fool Moon,” a terrific and original noir piece in which a couple of Mimetown detectives are on the trail of a murderer. It’s got the whole cop-drama aspect, a weird sort of Roger Rabbit vibe in places, and tons of cleverness with the pantomime and attention to detail.

Some of the splashiest, gooshiest scenes appear in “Under the Clown Moon,” by Jim Goforth; I had a bit of trouble suspending my disbelief over the actual moon part – TA to an astronomy professor in college, I had earth-moon-sun diagrams embedded in my brain – but the chaotic goresplat made for tons of fun.

So. If you are already disturbed by clowns, this book offers plenty to make you shiver and flinch … if you are not already disturbed by clowns, quite possibly you will be by the time you’re done. You’ll smell the popcorn and hear the calliope music, so step right up, ladies and gents, step right up! Ringside seats for the first of what will be a whole three-ring circus! 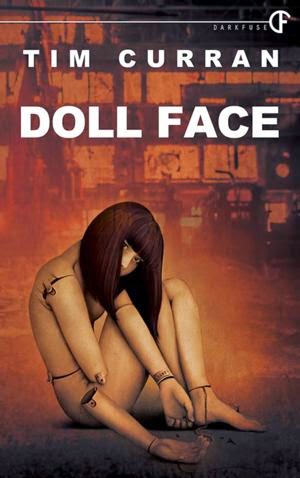 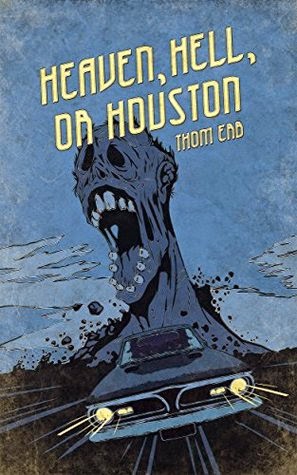