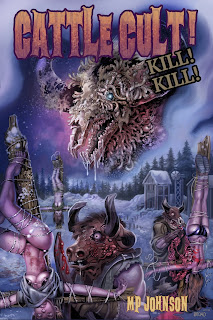 When his daughter goes missing, and the police in Catspaw, Wisconsin seem unconcerned, Morgan takes matters into his own hands and gets his local militia together. Up until now, the most the armed group has done is volunteer around their community, but now they're up against something that pales when compared to their darkest nightmares.

Johnson strikes yet again with this insane bizarro horror romp, featuring animal-masked cultists trying to summon a bovine deity. The level of strange here is parallel to the gruesome, and I'll assume vegetarians will want to approach with extreme caution. CATTLE CULT features several images I won't be shaking anytime soon, and I'm now officially finished with "O"-shaped cereals.

Johnson continues to carve out his place among weird horror writers, and this intense novella just may be the best place for newcomers to start. 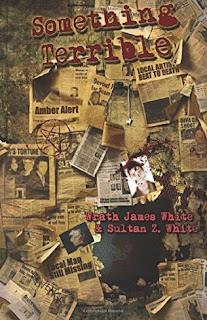 One of the greatest combined sense of pride and terror any parent can have is when your child shows signs of turning out JUST LIKE YOU. Or, worse, shows signs of outdoing you, the little stinkers. I know mine’s already a better writer than I was at her age. I can’t help but wonder if Stephen King feels the same way.

Now, consider if you will, Wrath James White. Wrath is one of the hardest-hitting, most brutal, most unflinching forces in the genre. Spurred on by any sort of collaboration or competition, he is not going to go easy on anybody. Not even, or especially not, his own son.

Talk about some shoes to fill, some legacy to live up to. Most of the writers I know are daunted by Wrath, and to have him as a father? That’s got to crank the intimidation factors up to damn near archetypal.

But, if this book is anything to go by, Sultan Z. White is more than up to it. Another precocious, talented brat. Just what we need! (though, sincerely, it IS what we need, and more of it, so, keep on bringing it, kids!)

Having them join forces in the same book? That’s a recipe for a tag-team powerhouse double threat, for sure. Neither of these guys takes any prisoners. The stories here, whether by one or the other or both … you know those movies where the fighters are training by pummeling a side of beef hanging on a meathook? The side of beef is your brain. 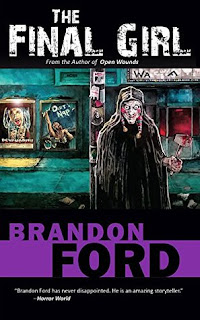 A midnight showing of a crappy slasher flick in an old run-down theater is always a fun time. Except this night, at The Colonial Theater. Life is going to imitate art for those unlucky enough to attend “Bloodletting,” and getting out alive will be a challenge.

The moviegoers are a diverse group – a reluctant reviewer, an exhausted waitress, two brothers who sneak out for the time of their lives. They, with several others, find themselves hunted down in the theater during the movie. Stalked in the dark, oblivious to the carnage around them, they will try to make it through the night.

THE FINAL GIRL reminded me of the opening scene of SCREAM 2 in that someone is murdered during the movie, but nobody really realizes what is happening. That scene creeped me out, and THE FINAL GIRL did as well. Even when you’re watching a comedy, you are vulnerable in the dark; who knows what kind of person is sitting behind you?

But once the few people who are still alive understand what is going on, they desperately try to get out of the locked theater.

Who is killing the moviegoers? Why? And will the titular character get out alive?

For a slasher movie in book form, I actually became interested in several of the characters and upset at their fates. Even though most victims in body count movies are just there to die in horrible ways, the author managed to flesh out his characters enough to get invested in them.

The ending was a bit of a twist and reminded me of a movie I recently saw, but I’m not going to name it because that would give it away. I was surprised at the ending, but it was perfect for this book.

I’ve read several of the author’s books, and I’ve yet to be disappointed. Check out THE FINAL GIRL, and have a fun time! 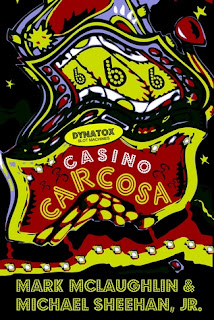 In this slick little tale, McLaughlin & Sheehan, Jr. introduce us to Mason Schell, a man heading to Vegas for one last romp before his terminal brain tumor does him in. But those familiar with the authors should know Schell discovers way more than he bargained for, and this "Tale of the King in Yellow" will delight fans of weird fiction across the board.

Considering this is such a short story I won't give anything else away, but kudos to artist Dave Felton for some great interior illustrationsand DMP for another fine publications Lovecraftian collectors will want. 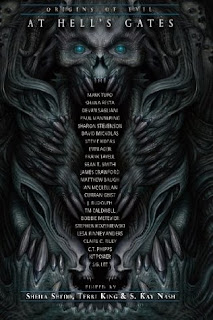 The second installment of At Hell’s Gates offers up 22 more stories to benefit the Intrepid Fallen Heroes Fund. A great cause to support, and a lot of good reading in return! As I write this review, it’s Memorial Day in the U.S., which makes it all the more pertinent and poignant. Far too many have given their all, leaving their loved ones to struggle on without them, and too often without the recognition they deserve.

The book opens with 'Pulse' by Mark Tufo, which gave me mixed feelings right off the bat. I’m no fan of bugs, so, the prospect of a gadget to get rid of them does have its tempting side … but I’m also aware of their necessity. I really expected the story to go in that direction, when instead it surprised me by going somewhere else, and a whole lot further.

Among my other top fave picks from the lineup:

'Ink'” by James Crawford, is a really good example of why it’s important to trust your tattooist; those pics you see on the FAIL sites (“no regerts”) are bad enough.

Sean T. Smith’s 'Mirage' … wow, just wow … I’ve never read much sci-fi, but I’ve read some great bizarro, and the descriptives and alien otherworldly imagery in this one knocked me back a step.

'A Mother’s Nightmare' by J. Rudolph takes a theme often touched upon in zombie stories but explores it in more vivid and horrifying detail than is usually seen.

C.T. Phipps turns up the creepy with 'Cookies for the Gentleman,' which had nuances of the diabolical, the fae, and a nod to a certain sharp-dressed fellow of the modern monster age.

And last but not least, closing out the book is Paul Mannering’s 'The Gouger,' a gory piece of mechanical carnage that sheds a harsh red spotlight on aspects of the fishing industry I could have just as soon done without. 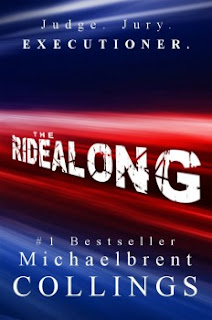 One of these days, this guy will produce a book that can be read at a mellow, relaxing pace. That day hasn’t come yet, and if THE RIDEALONG is any indication, that day still won’t be anytime soon. It is, as you might guess from the title, a cop-based action thriller.

But with more. Way more. THE RIDEALONG subject in question isn’t a reporter or researcher. It’s Officer Latham’s teenage daughter, Mel, who can’t bear to be apart from him now that he’s going back for his first day on the job after a terrible deadly shooting.

Mel is afraid of losing her dad, and why not? It’s been just the two of them against the world since her mother died, so long ago. How can she be expected to concentrate on school and boyfriend and such? Instead, they have a makeshift bring-your-kid-to-work-day. Neither of them expect Mel’s fears to be more than justified.

Someone else remembers the terrible deadly shooting, and wants revenge on the policemen involved. The most vehement, evil revenge looks to be planned for Latham in particular, who suddenly ends up framed and implicated in several crimes. Unable even to turn to his own brothers and sisters in blue, he and Mel are on their own in a desperate race to stay alive.

Aside from a couple early bloopers leading to some confusion about names, this one’s another solid win. An instant hook, engaging characters, unrelenting tension, some real hold-your-breath moments, gut-punching revelations, and enough to keep you guessing right up until the end. 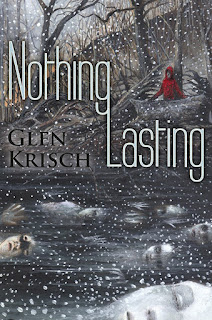 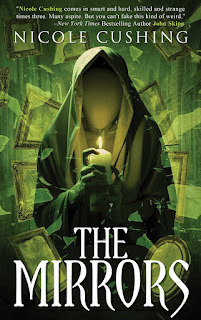 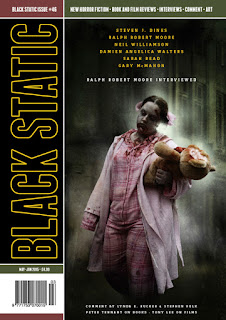