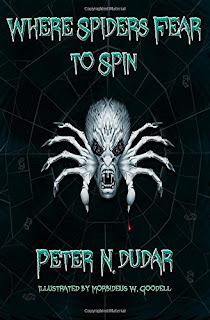 Sadie Mills is a once-famous and glamorous soap opera star who is now cared for by her resentful daughter Theresa. Theresa has never forgiven her narcissistic mother for her father’s death, a man driven to suicide by his wife’s affairs.

Now Sadie’s life is nearing its end, and Theresa is looking forward to finally being free of her mother’s demands and constant criticism. But she’s not the only one looking forward to Sadie’s death. Andrew, her husband, is waiting for her on the other side, plotting her eternal torment.

There are a few illustrations throughout the story, a couple of them creepy and jarring. The story itself is engrossing, and Sadie as a narcissistic mother was portrayed all-too-well. And while you root for her to finally get her comeuppance, you also feel a little sorry that she is paying the price while so terrified.

I’ve read a few of the author’s works, and have enjoyed each one.  I enjoy stories that can creep me out instead of grossing me out, and WHERE SPIDERS FEAR TO SPIN is a perfect example.

There is a bonus short story at the end of the book called “Peripheral Vision” that weaves a tale of parental grief with a ghost story. It’s not only sad, it’s scary as well.

If you like your horror a little less over-the-top, this book will be perfect for you. 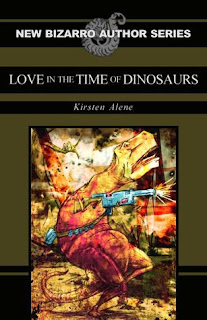 I’m not sure exactly what I was expecting from a book like this, but whatever it was, I don’t think that was it. If a hallmark of the bizarro genre is leaving the reader with a vague but pervasive sense of baffled unreality, then we’re on target here.

For something with a first-person POV protagonist, there’s a strong sense of detachment. The character is nameless and just kind of … absent-feeling, lacking real emotion or connection or personality. Or maybe that’s the monastic aspect?

Anyway, okay, yeah, so, there’s these monks. Who are at war with the dinosaurs, which they refer to as Jeremies (if there was a reason, I missed it). For weapons, the monks have swords and whatnot, plus some sort of plastic-encasing goop guns (I thought of the game Dino Hunt, in which time travelers capture specimens for their zoos in the future), and people can survive all kinds of injuries. Dismembered? No prob. Torn in half? We’ll stick a spare leg on there and you can hop.

I guess, overall, I found it okay. Certainly bizarre, though maybe just kind of gratuitously so, weird for the sake of being weird, without much in the way of deeper substance going on. Definitely going to file this one under YMMV and leave it at that. 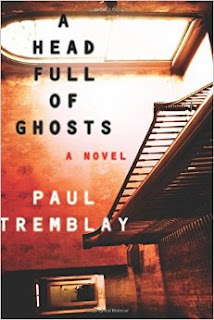 When 14 year-old Marjorie begins acting strange, it sets off a series of events the Barrett family could've never imagined. John, Marjorie's out of work father, suspects his daughter's outbursts are more than just typical teenage issues, especially when her doctors are unable to help the growing problem. And after a local Catholic priests examines her and believes she may be demonically possessed, he agrees to help them out.

But this priest, Father Wanderly, has more on his mind: he contacts a reality TV production company about the Barretts, and with a little persuading, the company convinces the Barretts to allow their family to be filmed for a new program titled' The Possession,' which turns out to be a huge hit.

In the wake of the show's sucess, Marjorie's younger sister, Merry, is made fun of at school and grows increasingly paranoid of Marjorie's actions. She loves her older sister, but doesn't know whether to believe if she's truly possessed or just faking it.

The power of A HEAD FULL OF GHOSTS is its narrative: most is seen through the eyes of young Merry, and a few sections are told through a horror fan blogger named Karen, who the author slowly reveals as she unfolds issues surrounding the TV show. It's an effective style that had me glued to the pages until the final chapter, which will surely become one of the most debated conclusions in the genre for some time to come.

Tremblay gives a fresh spin on the possession story, and adds plenty of surprises along the way. GHOSTS also features the best use of a reality TV show since Jason Hornsby's grossly underrated 2006 novel, EVERY SIGH, THE END. 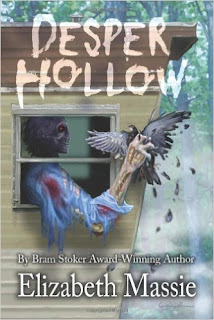 I am a big fan of both Sharyn McCrumb’s Ballad series of Appalachian mystery/thrillers, and of Edward Lee’s depraved goretastic backwoods horror. Desper Hollow is like an example of what you’d get if those books had a baby together.

It’s also a zombie story, but don’t let that fool you … this is no ordinary zombie story in the whole outbreak apocalypse sense. Like the rest of the book, it’s kept close in, confined, rustic, and remote. The rest of the outside world has no idea what’s going on up there in the hills.

Of course, that will change if Jenkie Mustard has her way. She’s inherited a little something extra-special from ol’ Granny Mustard, something other than the thriving moonshine empire her brutish cousins have taken over. Better yet, ever since Jenkie’s sister Suze went nuts and burned down the town, she doesn’t have to share the credit with anybody.

She reckons, though, it’ll make her famous. The power to bring dead things back to life? She’ll be a celebrity for sure! Her letter is enticing enough to get some TV people to come visit, maybe to turn her into her the star of her own reality show.

If Jenkie hasn’t quite perfected the process, so what? She’s got a few examples of what she calls ‘hollows’ stashed in her old trailer. She can even control them. Kind of. Soon, the TV people and Jenkie alike are in for some surprises. One of the ‘hollows’ is different, not just mindless and hungry like the others.

DESPER HOLLOW did leave me with one agonizing unanswered question, but otherwise I found it a great read, highly entertaining and well-written, enjoyable from start to finish. 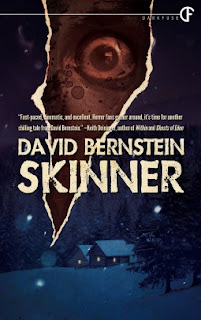 Rob and his friends are heading to Rob’s boss’s cabin in the mountains for a weekend getaway. As they get further up the mountain, they begin to have trouble navigating through an unexpected blizzard. They are almost to the cabin when Rob sees an old man standing in the middle of the road. He swerves to avoid hitting the man, and the Jeep ends up sliding over the edge of the mountain. From that moment on, the friends are in a battle for their lives from the elements and from the wolves that stalk them.

The group, one of them severely injured, find the cabin and hunker down, hoping for the storm to pass so they can be rescued. But the cabin isn’t the refuge they had hoped for, and they find themselves in danger not only from the wolves gathered around outside, but from each other as well.

This is a fantastic story. While it hinted at some common tropes – friends in a secluded cabin, sinister animals, a creepy old man, a broken-down car that leaves its passengers stranded — the story is original, with twists and turns that keep the reader guessing. I will also admit to saying “Noooo!” out loud a few times at the fate of some of my favorite characters.

David Bernstein is a machine when it comes to putting out books. And yet, each new book is even better than the last. His books are a blast to read, and the stories are so well written you can picture everything in your head as if you were watching a movie.

When you start reading SKINNER, make sure you have a lot of time, because you’re not going to want to put it down. 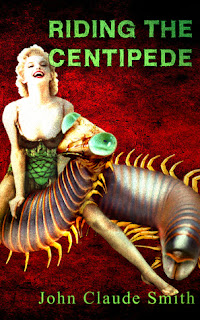 The streak continues. Everything I’ve read so far by this author, the first thing I can even say is just “wow.” Followed by a babble of semi-coherent wonderings about how it is he’s not already hugely famous and rolling in loot. Because, well, WOW.

All I can think of is either: a.) he hasn’t been discovered enough yet; or b.) the writing’s so rich, decadent, heavy and luxurious that it scares off anybody just looking for an easy-breezy-peasy read.

Now, given how dang arrogant and pretentious and literary-snobby choice b.) would make ME sound, I’d really rather just go with a.) … so, get on it, people!

And you might as well jump right into the deep end with Riding the Centipede, a complex and labyrinthine magical mystery tour. Part psychedelic drug-quest as one young man works his way through a series of stages in search of the ultimate experience … part detective story as his sister and the private investigator she’s hired try to find him … part weird thriller as a nowhere-near-normal villain also joins the chase (awesome villain, called Chernobyl, with an origin story right out of a superhero universe!).

Plus, there’s bugs. If, like me, you’re kinda phobic about the creepy-crawlies, be warned. Be warned also for excruciatingly precise descriptions of various moments of sublime grossness. I almost couldn’t get through the scene with the Ratman, and the Reptile Queen wasn’t much more pleasant!

Great book. Not an easy read; you’ll have to pay attention. But it’ll be worth it. Smith’s artistry, style, and command of language is really, truly, staggeringly impressive. I am consistently blown away. Just SO good. This is a guy who knows his stuff, who has razor-sharp honed skills. 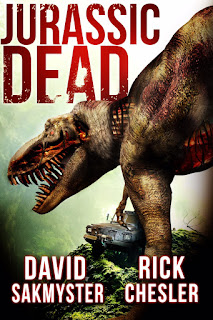 Sometimes, when you can’t decide between fighting zombies or dinosaurs, the answer is, like the little girl in the Tostitos commercial, why not both? Zombie dinosaurs! And why stop there? Infectious transformative ones whose bite turns people into ravening hybrid monsters!

With guns! And helicopters! And rocket launchers! From a secret polar research expedition to a classic supervillain volcanic island base! With evil geniuses and sexy covert operatives and gore and guts and explosions and nonstop action carnage!

It’s like a video game, starting off with a few basic mobs and weapons, but ramping up with vehicles and gear, bigger maps, crazier obstacles and boss battles. Not necessarily a bad thing. Fun in a caricature-character, over-the-top absurd, don’t hesitate long enough to think about it kind of way.

But I wanted more dinosaurs. I always want more dinosaurs. And I found the whole notion of a frozen, revived, undead T. Rex a little more plausible than most of the humans’ story arcs, reactions, or behavior.