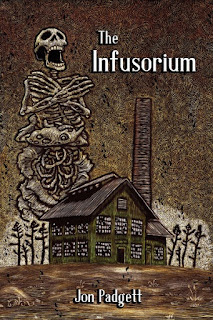 Detectives Raphaella Costello and Mike Guidry are on a strange homicide case in the small town of Dunnstown. In Municipal Park, elongated, deformed skeletons have been discovered buried in the ground with the skulls facing out. In the center of the park is an abandoned paper mill that's responsible for causing a deep fog to cover the town and cause issues with everyone's health...especially with the asthmatic Raphaella.

Told from Raphaella's point of view, Padgett builds a strong sense of dread from early on and manages to create an atmospheric tale that'll have you swearing there's soot all around you. With a weird cult thrown in for good measure, THE INFUSORIUM becomes a solid horror yarn genre fans will surely enjoy. 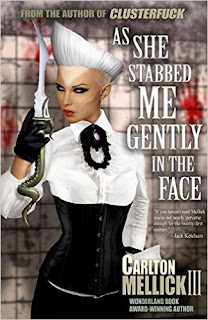 I don’t even mean the whole beauty and perfection of Carlton Mellick III’s take on serial killers, though, wow, it’s no slouch in that department either.

At first, I was expecting Oskana’s art to be the focus, the implement and method of her killings. I expected delicate intricate sculptures of machinery and death, elevating the SAW movies to elite exhibitions, murder galleries with champagne and hors d’oeuvres. But, nah. Too obvious. Her knife is more than enough to get the job done.

The real twist comes when she meets Gabriel, her ideal victim. Her perpetual victim. Her immortal victim. He tells her he’s angelic, it’s his purpose, it’s the only way to save her own soul, to spare others. She can kill him over and over, as many times as she likes, in as many ways she can think of, and he keeps reviving. He heals. Whatever pieces she slices off of him soon grow back.

And that’s where the glorious rightness comes in. The eternal question, answered. The constant arguments, solved. Comic geek all-nighters debating Wolverine’s mutant power, Gargoyles fans waxing philosophical what-ifs over Demona and MacBeth, the mythological implications of the hydra, the slicing in half of worms … THAT question, THOSE questions. Here it is. Here it finally, perfectly is.

What DOES happen? When regeneration meets dismemberment and evisceration? When living flesh can’t be killed?

As fascinating as Oskana’s character, as intriguing her game of cat-and-mouse with the handsome young reporter who’s discovered her secret, it was the moment I saw where the Gabriel story was going that I literally DID do the excited little double-fist-shake “yesssss!” thing.

Fantastic story, fantastic book. Stylish, sexy, sadistic, wickedly incisive, cutting, and sharp. It deserves far more than two thumbs up, and, fortunately, thanks to Gabriel, there are way plenty of thumbs to go around! 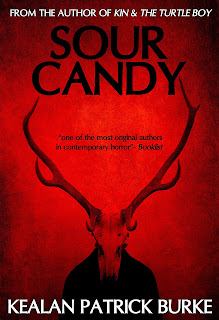 While shopping at Walmart, Phil Pendelton watches a young boy throw a tantrum while his mother (or guardian) ignores him. When things calm down a bit, he accepts a piece of candy from the boy and is on his way. On the ride home, the woman from the market rear-ends his car, and Phil's life quickly dives into chaos.

The detectives who come to the accident scene claim the boy from the market, named Adam, is actually his son, but Phil swears he has never seen him before. But when they check Phil's house, there are pictures all over of him and Adam together, and Adam himself is there waiting.

Not knowing if he is the victim of a mad practical joke or actually losing his mind, Phil is thrust into a Twilight Zone-like nightmare that will play games with your psyche until the last word of this powerful novella.

Those into psychological horror don't want to miss this. 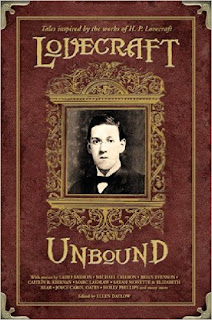 The empress of anthologies, Ellen Datlow, presents a new twist on the Lovecraftian … Lovecraftian pretty much without the Lovecraft … no pastiches, no Cthulhu and no tentacles, vocabulary not dripping with squamous adjectives and made-up languages that sound like someone trying to yodel opera through cold oatmeal.

Sounds like a tall order, but the twenty tales she’s lined up manage to pull it off with aplomb. They have more of a focus on the essence of the intangible, existential, more cosmic and creeping horrors, the bigger picture as it were.

“Cold Water Survival” by Holly Philipps is my personal stand-out favorite of the bunch. Set on an immense iceberg, the descriptions are so vivid and the atmosphere so real, you’ll be shivering with chills long before the weirder events start setting in.

Speaking of chills and icy atmosphere, Dale Bailey and Nathan Ballingrud’s “The Crevasse” is another arctic adventure … though certain aspects made it difficult to read (poor doggies!).

I also particularly loved “In The Black Mill” by Michael Chabon; it hit just the right notes for my fondness for small towns with dark histories, secrets, archaeology, and ominousness.

“Marya Nox” by Gemma Files had similar elements of appeal, encounters of mysterious temples and a strange but compelling goddess, told in the form of an interview transcript … first class stuff.

“The Mongoose,” by Sarah Monette and Elizabeth Bear, is fiendishly clever and fun, the kind of playful literary twist I always enjoy.

My biggest complaint with this whole book is that I must’ve forgotten at least twelve separate times I was reading an anthology. My mind kept resetting to novel-mode, so there I’d be expecting a next chapter to continue the tantalizing intrigue, only to find the start of a new story instead. 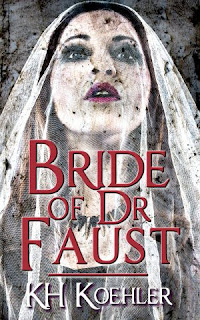 This dark and disturbing sexy sequel to THE DREADFUL DR. FAUST is grim, gory, and even more steeped in the turbulent brooding trauma and atmosphere of its predecessor. I mean, the book just about drips with emotion, as well as madness, pain, and assorted bodily fluids in a thick wine-rich cascade.

It picks up with the Dr. and Louise, his Poppet, his bride, the girl whose life he saved and remade into an echo of his own immortality. But just as Louise is relishing her situation, another woman appears. Another woman with whom the doctor also has a troubled, passionate history. An equal, as opposed to a pretty plaything. She brings a warning of an old rival, a surgeon with his own sinister goals, and his own desire for revenge. She also becomes intimately involved with the doctor’s new project.

Louise, meanwhile, seeks comfort and distraction in the upper world … where she meets a nice young man with an adorable little daughter … and brings them all closer to terrible danger as the doctor’s rival closes in.

These books are not for the prudish, nor for the squeamish. Several flinchworthy scenes, compelling seductive mutilation and horror. Well worth a look, if you’ve the nerve. And setting up nicely for a third installment! 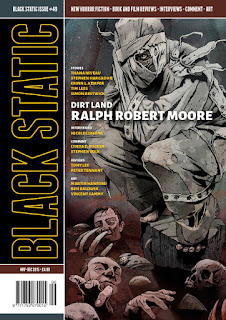 The latest issue of everyone's favorite UK import opens with the second installment of Stephen Volk's 'Mirrors for Eyes,' this time examining the subversive nature of the TV series HANNIBAL, then Lynda E. Rucker gets to the bottom of what makes humorous horror work.

Fourteen year-old Roy, a sawmill worker, and his young wife Audrey become parents to a four-legged son in Ralph Robert Moore's 'Dirt Land,' a  novelette that sets the bar for this issue's fiction quite high. When it becomes clear his charismatic uncle Hollis is actually the baby's father, Roy goes against unspoken community standards to stick up for his wife. Moore's small town fable makes the bizarre seem all too real and readers will surely cringe at the fate of our protagonists.

In Thana Niveau's 'Going to the Sun Mountain,' two sisters travel across the country leaving behind a trail of dead male bodies. We learn Glacia and Lys have developed mind-reading powers while being held captive in their father's laboratory, which they destroyed and have since been on the run. Reminiscent of a classic Dean Koontz story and finely paced, yet the tale seems like the prologue to a longer piece. As it is, it doesn't go anywhere.

While investigating an assault, detective Frank Burroughs becomes addicted to an unusual beer in Stephen Hargadon's 'The Toilet.' The Toilet is a small bar, located a flight below street level. Burroughs' life changes after he visits the restroom in this creepy, noir-ish mind bender.

In 'Gramma Tells a Story,' Nissi moves into her grandmother's house in Costa Rica and learns its history through nightly visits from her grandmother's ghost. Erinn L. Kemper gives the ghost and back story equally vivid life in this quiet, sad, but captivating tale.

Paul, a patient transporter, deals with 'The Ice Plague,' which is a new illness causing people to become indifferent to the point of near-zombification. Tim Lees' fresh take on the "apocalyptic outbreak" thing is genuinely bone-chilling and written with a razor-sharp pen.

Dealing with the loss of his wife (a popular theme in a lot of recent horror fiction), Bryan attempts to scale a steep hill he had once visited with his spouse in Simon Bestwick's 'The Climb.' As Bryan closes in on the impossible summit, a spider-like creature catches up to him in this metaphoric study of grief, determination, and regret. Familiar, but well done considering its short length.

Tony Lee reviews another boat load of DVDs and Blu-rays (I was surprised there was little love for THE CANAL, my favorite horror film from last year), and as always my to-see list has gained a few more titles.

Author Nicole Cushing is interviewed after Peter Tennant delivers excellent reviews of her latest books THE MIRRORS and MR. SUICIDE. There are also reviews of releases from Tartarus Press, DarkFuse, and some new chapbooks. Peter's review of Nathan Ballingrad's novella 'The Visible Filth' convinced me to track down a copy.

All systems are GO for the forthcoming, landmark 50th issue!

Subscribe or get a single issue here: BLACK STATIC 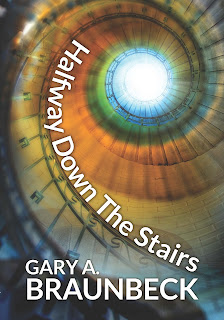