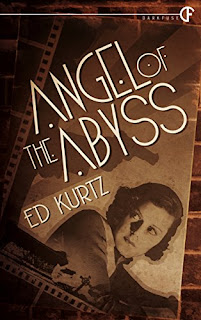 Technically, the noir era was more 1930s/1940s, and this book is set during the early 1920s and modern day, but something about it feels steeped in noir throughout. It's brooding and sensuous, dark and fraught, turbulent, forbidden, laden with cold-smoldering intrigue.

Plot-wise, it's about a silent film, a movie called Angel of the Abyss, its subject matter taboo and controversial even as it's being made. For lovely young actress, Grace Baron, it might be her big break. For director Jack Parson, it's a chance to make a statement. For others in the industry, it could mean trouble.

Fast-forward nearly a hundred years, and Angel of the Abyss has become long-lost and semi-legendary, all but unknown except to the most dedicated experts and aficionados. Rising star Grace Baron vanished under suspicious circumstances, one of those enduring Hollywood mysteries to this day.

When film restorer Graham gets a call out of the blue from the nice ladies of the Silent Film Appreciation Society, who've found a surviving reel and want him to work on it, he can't resist the chance. Nor can his wayward devil-may-care buddy Jake resist tagging along.

Of course, there are still people who don't want the movie to be restored, people who will go to any lengths to keep it lost. Even (dramatic music) murrrr-der. Graham and Jake learn that the hard way, but by then they are in too deep to just walk away.

The historical segments are particularly handled with a beautiful believability and skill, a time-travel experience through Prohibition and other issues of the time. I found it an engrossing, hypnotic, fascinating read. 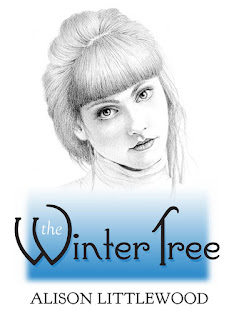 "Whatever is the matter?" she said.
"Nothing my dear," I replied, unfortunately at that moment removing my hand to reveal the pale grey kid of my glove crimsoned with a drop of blood.

Littlewood's turn of the century (sort of) ghost story is a haunting look at a man who believes he has married the wrong woman. We're not sure if protagonist Arthur Geddes is slowly losing his mind due to his recent revelation or if he's being hit with a wave of guilt in the wake of his mother's passing. Either way, THE WINTER TREE is a quick and satisfying read that asks us to draw our own conclusions.


Grab one here while you still can: The Winter Tree 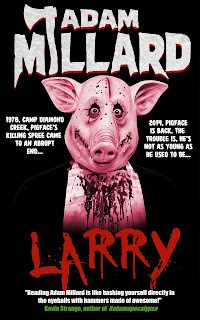 Everything I've read by Adam Millard has been an absolute delight, a real kick in the head, witty and hilarious, winking-sly fun. In this one, he takes on the slasher genre, to terrific effect.

Well, presumably. We all know how that goes. Pigface survived, but retired. Hung up his mask and his ax. He's been living with his crone of a mother ever since, both of them getting older and older and more and more infirm. Now Pigface, a.k.a. Larry, is feeling the urge for a last killing spree before he's too decrepit.

No stone is left unturned in terms of homages. Tropes are troped, stereotypes are played with. A must-read of epic hilarity, while taking on our society's very real fears of aging and the struggle of trying to keep up with the times. 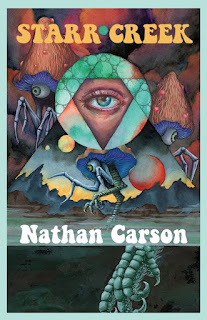 Just lately, with nostalgia running high, anything set in the 1980s is going to draw inevitable comparisons to STRANGER THINGS, so I might as well get it out of my system. STARR CREEK is like STRANGER THINGS all grown up and wack out of its mind on drugs.

It's rural 1980s Oregon rolled in LSD, a cavalcade of weirdness that opens with a dog-food-eating contest and escalates so rapidly that by the time you get to the really out-there stuff, you kind of just have to take it in stride.

Let me tell you, though, there's a lot of out-there stuff, and it's pretty brain-bending to say the least. The bit with the dog food (which I'd had the, uh, let's go with 'pleasure' of hearing the author read from on a couple of occasions) is a gorge-clenching piece of work to be sure, and it's only the warm-up; it's one of the most normal parts of the whole book.

Fittingly enough, the kibble competition features a guy called Puppy, whose family tends toward the casual when it comes to names, as well as things like, oh, say, schooling, hygiene, the law, and incest taboos. Puppy's not popular, and he's also not someone to cross. But, even Puppy isn't ready for the convergence of events headed Starr Creek's way.

Packed to the rafters with tripping teens, backwoods rednecks, biker gangs, hippie communes, meddling kids, and kooky cultists of various description ... a meander down a psychedelic memory lane of Dungeons and Dragons, heavy metal music, classic arcade games and television ... with nods and winks at everything from Lovecraft to E.T. ... yeah, STARR CREEK will take you places, whether you were an 80's kid or not! 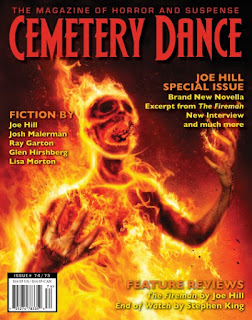 Headed by incredible cover art courtesy of Vincent Chong, this double-sized Joe Hill special issue is packed to the gills with great fiction and feature articles.

After an excerpt from Hill's novel THE FIREMAN, we're treated to an all-new novella titled SNAPSHOT, 1988 (also by Joe Hill), about a man recalling his younger days as an overweight nerd who spent much time with his elderly nanny, then helped her in his teen years as she became the target of a strange man whose Polaroid camera robs people of their memory. Powerful stuff and part of a forthcoming 4-novella collection.

As for the rest of this issue's fiction offerings:

-THE RICH ARE DIFFERENT by Lisa Morton: A best selling author meets a rich family she wrote about. She falls in love with one of their sons and discovers an ancient family curse. Creepy, classic styled horror.

-MATTER by Josh Malerman: A young boy roots for his aunt, who is convinced she has found a way to walk through walls. Brief yet effective.

-BAD LUCK by K.S. Clay: Crazed man enters veterinarian's office requesting his cat be euthanized. Not due to illness, but a curse. A tight little suspense yarn.

-SEED by Erinn L. Kemper: A social worker is recruited by a most unusual family.

-AUTOPHAGY by Ray Garton: An all too real political/social commentary ... with monsters. One of the best of the issue.

-THE BLUE HOUSE by Bruce McAllister: A mysterious house and a young girl who hangs around it provide life changing events for a young summer ranch hand.  A beautifully told ghost story.

-THE LAZARUS EFFECT by JG Faherty: Twin God-fearing brothers head a group of survivors during a zombie plague. A fresh, religious take on a tired subgenre.

-INDIA BLUE by Glen Hirschberg: A young San Bernadino man is hired to work the PA for a new cricket league at an old sports arena. A cricket legend known as The Destroyer is among the small crowd of spectators in Hirschberg's wonderfully weird entry. This would make one hell of a midnight movie.

-EYES LIKE POISONED WELLS by Ian Rogers: A private investigator is hired by a rich man to locate a rare missing sword that has been stolen from his estate. But the PI becomes the target of his employer's rage. A well done creature feature.

Among the non fiction features:

-A nice interview and history of Joe Hill's fiction by Bev Vincent and Peter Crowther.

-Thomas Monteleone with another great column, this time even extra ballsy (if you can believe that!) as he explains his distaste over the new WFC award.

-Michael Marano looks at 3 recent blockbuster films and gives his two cents on why he believes they're stroke jobs.

-Mark Sieber on how NOT to sell books at a horror convention.

-An excellent interview with publisher Paul Goblirsch of Thunderstorm Books.

I wouldn't mind every issue of CD being a double issue so long as it holds the same quality as this one, that's as beautiful to look at as it is to read. Seriously...this thing's a real gem for any horror fan's shelf.