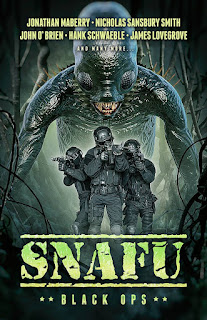 The SNAFU series has been around for several volumes but this latest edition is my first foray into its military horror stronghold. Each story here looks at special force teams from all walks of life as well as different time periods.

In the lengthy opener ‘Back to Black’ by Jonathan MaBerry and Brian Thomas Schmidt, it’s post apocalyptic zombie time yet again, and there isn’t much here you haven’t read before (gangs of thieves and rapists end up being more dangerous than the zombies, survivors on a quest for a cure confront maniacal tyrant, etc), yet this one features MaBerry’s super commando Joe Ledger (along with a novice and two other vets) who use their head-cracking skills to take down a false medical center. Familiar, but fun thanks to prose that reads as fast as the heroes kick ass.

‘The Waking Dragon’ by RPL Johnson is an excellent entry dealing with three POW’s who are tortured through virtual reality. Johnson shows how mental torture can be more brutal than physical and a few scenes had me squirming.

A small band of crusaders encounter an ancient evil in ‘The Clash of Cymbals.’ Richard Lee Byers’ historical horror tale is rich with religious paranoia and some fantastic settings.

James A. Moore and Charles Rutledge team up for ‘Black Tide,’ which finds Moore’s character Jonathan Crowley (and his posse) facing off against the creature that adorns this volume’s cover. An action-packed good time with a few suspenseful moments.

In Alan Baxter’s ‘Raven’s First Flight,’ the butt-kicking Raven joins a supernatural special ops team who are after a maniacal necromancer. I haven’t read Baxter before (::ducks from flying tomatoes::) but am looking forward to checking out more of his work.

Next up is ‘Sons of Apophis’ by the Horror Fiction Review’s own Christine Morgan. I always feel funny when reviewing books/stories by friends and colleagues, but DAMN does Morgan shine here with a “mini epic” set in ancient Egypt. Morgan’s take on religion (including prophecy and creation) are refreshingly different and her prose is top notch. An outstanding entry.

‘Seal Team Blue’ is another zombie pandemic tale, and like the opening story, John O’Brien’s storytelling abilities lift this one up despite the familiarity. Loaded with action, this should satisfy those who still crave tales of the undead, and it actually ended up being one of my faves here.

In ‘A Debt Repaid,’ Tim Marquitz and J.M. Martin deliver a more fantasy-oriented tale, featuring prodigy Gryl on a mission to rescue Jacquil from the hands of an evil slave trader. Perhaps the most brutal story of the lot, there are a couple of neat twists and nearly non-stop action. Excellent.

Next up is Kristen Cross’ ‘Ground Zero,’ where vampires attack and battle in a crowded London subway. The most action-heavy story of the anthology, Cross gives us a wicked good time that’s neck-deep in suspense. For people like me that are beyond tired of vampires, the author proves bloodsuckers can still be the basis of a truly horrific time.

Hank Schwaeble’s character Jake Hatcher is out to find the Vice President’s kidnapped daughter in ‘Deepest, Darkest.’ With backstabbings-a-plenty, Schwaeble’s tight tale pulls us along with Hatcher until the final confrontation with what is easily the coolest monster to come down the pike in quite some time. I’d love to see some artists give their interpretation of it.

‘Raid on Wewelsberg’ by Seth Skorkowsky is another historical entry, this time set in 1945. It’s a wild blend of ancient and modern weaponry and techniques, as a group of knights set out to retrieve sacred weapons that had been stolen by the Third Reich. Skorkowsky’s historical mix-n-match was a complete pleasure to read and I believe could easily be lengthened to novel size. I want more!

Perhaps the most different piece here is ‘God-Killers in Our Mist’ by James Lovegrove and N.X. Sharps, where Ethan, the lone survivor of his team, is still committed to prove that a god can be destroyed. Another more fantasy-based story, I loved its descriptive style and deep sense of mystery.

Closing out SNAFU is another novella titled ‘Extinction Lost’ by Nicholas Sansbury Smith. Sergeant Joe Fitzpatrick and his Ghost Team head to Greenland to investigate strange reports coming from a Nazi laboratory. Here’s a major monster mash with a ridiculously high body count, set against a frozen wasteland. You can almost imagine GWAR writing a concept album based on this. Fun, fun, monster-killing fun!

SNAFU: BLACK OPS is a lengthy anthology, but just about every story works. There are plenty of fresh ideas, some (as mentioned) that could be expanded upon and others done just right. Editors Geoff Brown and Amanda Speeding have collected a solid batch of pulp horror goodness and like all good anthologies, I’ve discovered a couple of writers I’m looking forward to reading more from. 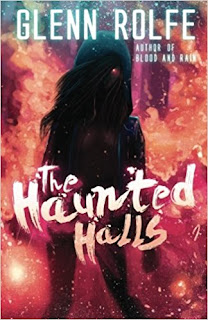 When you think about it, it's kind of surprising we don't have more haunted hotel stories. King, sure, with THE SHINING and 1408 ... American Horror Story did its stint ... but other than that it seems to be more murder-style Bates Motel stuff, even though tons of hotels have tons of history, mystery, and secrets.

Hotels are, really, kind of inherently spooky. They're between-places, transient places, where the entire gamut of human emotion and experience might pass through on a regular basis ... where few people actually live ... but, proportionally, where more people may actually die than the average house.

At the Bruton Inn, the hotel in this book, those statistics may be even more skewed. A presence lurks there, a feminine presence, part siren, part succubus, bent on violence and vengeance and sadistic sick thrills. A presence that's done biding her time, done building her power, ready to make a big push and a bigger, bloody splash.

This of course bodes ill for the guests and employees of the Bruton Inn. Some will be drawn in, recruited willingly or unwillingly to serve their new dark mistress. Others will become victims, fodder, or simple collateral damage.

Soon, it's up to a horror fan desk clerk and a pop-culture 'urban shaman' to try and stop the evil, while sociopaths and psychos devote themselves to the cause. The result is an overall enjoyable read packed with graphic gore, sexual content of the not-very-friendly variety, several flavors of madness, and supernatural menace.

I did notice some minor but nagging little inconsistencies throughout -- character names, place spellings, a few pesky homonyms, description nit-picks, stuff like that. Could have done with a smidge more work in that regard. But, otherwise, good hotel horror, offering more than a few disturbing turns and squicky twists. 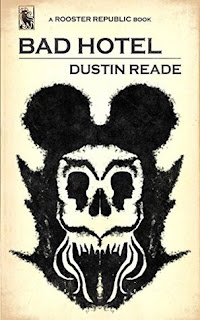 The title may be somewhat misleading, since we don't even get to the hotel until about 3/4 of the way through the book, and by then the WTF quotient is already way beyond off the charts.

This isn't just the hotel (though Billy Joel, "in hell there's a big hotel where the bar just closed and the windows never open," provided eerily fitting mental background music as I read). This is attempting to reach that warped destination of doom, through Dante-esque layers and levels of insanity.

It's disorientation from the get-go, it's like reading about trying to explain that dream you woke from, the one that all made such total sense at the time, before it falls apart into a blur. It's not feeling drugged or drunk; it's feeling like a stone cold sober person trying to navigate a whole world that's gone drunk and drugged and delirious.

See, there's these two guys, neighbors, whose houses have begun overlap-merging together. To the point that their furniture and even the clothes in their closets are hybrid mash-up fashion disasters. But that's just their particular dollop of the bizarre, an al-most-sane side note compared to what's happening other places.

The two guys, who also work together (though they're not sure doing what), decide to take some time off and go search for the epicenter of all this craziness, paranormal-investigator style. Their quest leads them through haunted donut shops, purgatorial department stores, reality distortions, Lovecraftian monstrosities, creepy schoolchildren, and that's not even half of it.

Fourth walls will be broken, minds will be bent like contortionists in yoga class, some turns of phrase are laugh-out-loud brilliant while others will linger squirming in the subconscious, and the end is a head-over-heels wallop.

An odd book, terrific, complex and profound even as it's utterly screwy, a journeying bizarro headtrip adventure. 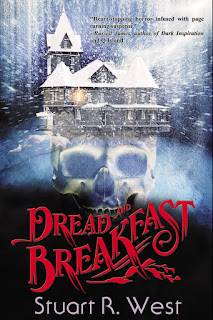 People like a guy who stole a whole lot of money, and the enforcer looking to retrieve it, and the crime boss determined to make sure the job gets done. People like a battered wife fleeing her revenge-minded husband with their little girl. People like the young newlywed couple out to do God's work no matter what.

It seems like almost everyone who ends up at the Dandy Drop Inn that night has his or her own share of sins and secrets. So does the inn itself, for that matter, with its . And once they're all cooped up together, with few options for outside communication or es-cape, it's inevitable that tensions flare.

The characters are genuine -- in more than a couple of cases, all too skeevily real. I particularly appreciated the way the little girl, Kyra, was written; very much in a believable kid-mindset and kid-POV.

All in all, it makes for a fun, cozy, entertaining thriller, woven throughout with creepy vibes and teasing hints that lead up to but don't spoil some good twists and surprises.