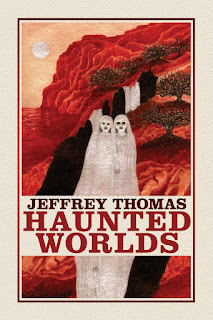 Jeffrey Thomas has become one of my favorite authors of the last five to ten years. His prose is often brilliant, subtle, haunting, and atmospheric, to say the least. He has this uncanny way of crafting timeless stories that possess ample amounts of mixed emotions and dread, where the reader is instantly hooked into the story and setting being told. It’s slow-burned into your psych with elements of Horror, Science, and Weird Fiction alike. HAUNTED WORLDS delivers all of the above with the same quality and expectations that I personally had before diving into this new collection. One of the dominant themes that I picked up on right away was this brilliantly lingering and overwhelming sadness, whether it was from a main character’s point of view in the story, or embedded in the roots of the setting and dialogue, there was this powerful, lingering sadness found at almost every turn of the page, and I loved every second of it.

Some of my personal favorites were: ‘Spider Gates’, there’s talk of a haunted cemetery in the woods, a white deer, voices and legend, only some make it out alive. But, what rests behind the ancient stone wall will forever remain a mystery. ‘Feeding Oblivion’, a brother’s trip to visit his mother in a nursery home is doomed by giant, black centipede like masses and they’re everywhere. I don’t think you can turn the television up loud enough to drown them out of your head once you’ve seen them either. In ‘The Left-Hand Pool’, two ponds border the roadway on the way to work, you see a strange black creature a couple of times, before getting turned down by a female you have a crush on at work. ‘Riah Gnol’, a modern-day horror tale about a mysterious ghost girl that haunts the local arcade. She’s been seen in a number of places, including, but not limited to, the laser tag arena. 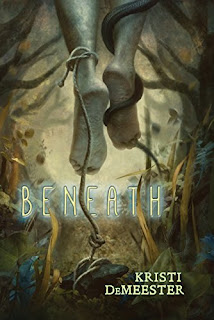 Okay, let's be honest here. Nothing I can say in this review would be as glorious as the fact that a book club assigned this one to their members and then issued an aghast apology once they realized what it was all about. THAT kind of epic cred is for the ages, folks.

I suppose they figured they were getting your basic moody broody backwoods gothic, some cross between A Scarlet Letter and V.C. Andrews. Which, in a sense, they were ... only, they were also getting a whole bunch more.

This isn't just tormented Appalachian angst laden with sin and struggle and poor suffering Rev. Dimmesdale. This rips away all the veneer, any romanticized notions. There's abuse and molestation and ugliness, the down-deep nasties, ol' time religion and then some. When it starts off with snake-handling as the default norm and gets into the dark ancient cthonic blood stuff?

But, it does start off with snake-handling as the default norm, when reporter Cora Mayburn is given an assignment from her editor to look into the practices of a remote church community. Given her own past experiences, she's reluctant, but accepts, and sets off for Hensley.

What she finds is fanatic zealotry, turbulent secrets, pent-up lusts, and ominous history beyond even her worst expectations. Something else is about to awaken, something ready to emerge and take over. Can a distrustful reporter and a disgraced minister save the day from a primal power, a feminine force of birth and death and blood and rebirth?

Now, me, I read it with great delight, particularly enjoying the rich sensory style and liquid delirious chaotic unreality, some really excellent body horror and gore, and brilliantly handled points of view through unspeakable transformations.

Then, before I got around to writing this review, I learned about the book club business and couldn't help chortling with sinister glee. Some of those reactions must have been something to behold! 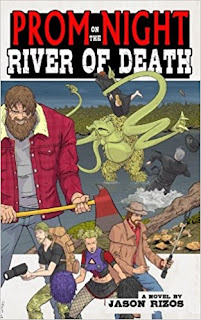 Ah, that classic love story of boy, girl, car, dark lonely road, escaped maniac, and hook hanging from the door handle! That's how this one may begin, but don't get complacent thinking you know what's next, because the urban legends are about to be upended and the tropes turned inside-out.

Welcome to a future where hunting teenagers is big business, cheerleaders bring extra bounties, and no night is more prime-time than prom night! Whether you're an old-school stalker sticking to the classic tricks, or a hotshot laden with all the newfangled gadgets, this is when and where the action is!

But wait, it gets even weirder than that. There's the aliens to think of, and the roving preachers, and rumors of some crazy band of resistance fighters, and all in all the whole thing's getting to be a bit much for a traditionalist like Chester. He just wants to snag his final bounty and retire in peace. Instead, he's in for the wildest and craziest prom night of his life.

Written in such a way that each increasingly WTF development seems to flow as part of a natural domino-effect cascade, with hilarious characters and humor and plenty of sly acidic cutting social commentary, not to mention packed with slashertastic action, fight scenes, and the requisite splatterings of gore, Prom Night on the River of Death is a hoot and a half.

Its only flaw is that it could've benefited from a hard fine-tooth edit, but otherwise I found it a very fun and entertaining read. 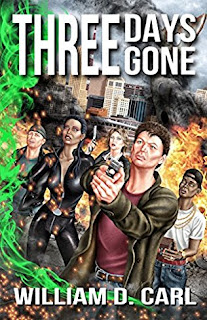 Subtitled "An Action Packed Urban Fantasy with a Noir Twist," this is the first installment in a planned series centered around private investigator Mike Gone, who, with his tall, tough as nails drag queen/secretary Helen, deal with cases deemed to weird for the Cincinnati Police Department, sort of a Kolchak-meets-X-Files thing. In Gone's first case, the victim of a mass shooting walks out of the morgue in a zombie-like state, and it's up to Mike and co. to find it. Three days later, the walking corpse manages to destroy a riverboat gambling operation, and in the process dies, yet manages to "transfer" whatever was making it tick into a random gambler.

Mike's crew grows to include Pam, a hard-assed cop (and his former partner), his secretary's boyfriend Larry, plus a blues-singing exorcist and his rapping grandson who, the more they look, discover strange events being separated by a three day time limit, and an ancient European spirit. It all culminates in an attack on a Cincinnati bridge, where Mike and co. are pushed to their limits in a dizzying, thrilling finale.

As if dealing with a demonic terrorist wasn't enough, it seems vampires have kidnapped Mike's girlfriend as revenge for him killing one of their own. This sub-plot makes it seem like we've read about Mike Gone before, and gives the character (and novel) some unexpected depth. Kudos to Carl for adding plenty of well-timed humor along with all the monster mayhem.

THREE DAYS GONE is a fast read and a fun addition to the growing urban fantasy subgenre. It seems fans are loving Mike's side kick Helen, me being no exception. I'm looking very forward to more from this motley, yet likeable crew of spook-busters. 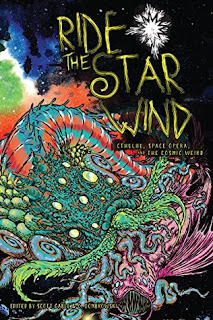 This right here is one brain-breaker of a book. Seriously. If the stories within don't pretty much shatter the grey matter, a clonk to the head with the print version would do the rest. It's nearly five hundred pages, a hefty tome to be sure. And it's five hundred pages of super-dense sci-fi cosmic horror, with every single story damn near a multiverse unto itself.

Not something to be read all at once, not something to breeze through; you will need to (sorry/notsorry) space it out and give yourself a chance to recover in between. The stories themselves span a likewise astronomical gamut. As a bonus, each is accompanied by a terrific illustration gleaned from the pens and psyches of an array of talented artists.

My personal top pick of the bunch: "The Writing Wall" by Wendy N. Wagner, which brilliantly hit all the right notes for me (not just because I'm biased in favor of Norse mythology, either; this one has fascinating environments, caving, surprise twists, and just all kinds of cool stuff).

Other standouts include: "Union" by Robert White, Lucy Snyder's "Blossoms Blackened Like Dead Stars," Tom Dullemond's "The Multiplication," Kara Dennison's "Canary Down," "The Sixth Vital Sign" by Wendi Dunlap, and Gord Sellar's "Vol de Nuit." Only a few of the tales didn't grab me for one reason or another; the majority proved to be mind-blowing on a staggering scale.

With twenty-nine to choose from, covering everything from cinematic space-opera to gritty bug-hunts to cross-temporal galactic peril to madness among the stars, there's bound to be something for every fan of weird fiction, often taking even the incomprehensible scope of Lovecraftian madness to exponential new levels. A stellar read in any sense, but yeah, best taken in measured doses. In space, no one can hear you lose SAN. 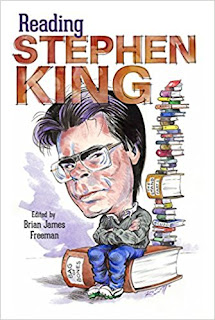 Gasp! What's this? A non-fiction book? In The Horror Fiction Review? Now, hold on, hold on, it's all right ... it's about the works of Stephen King, and Stephen King is a big part of why we're where we are, right here and now as a certain Wolf might say.

So, close enough, right? This is a gathering of essays from experts and academics, King's colleagues and peers and some mega-fans, all looking at the monumental impact he's had on the genre as a whole. Not only through his writing, but through the art it's inspired in various forms -- movies, paintings and illustrations. They look at his influences on younger writers, on wider-world media as a whole. They look at him as not only a literary powerhouse but a person and a friend.

Herein are reviews and criticisms and retrospectives, academic analyses and heartfelt messages. Herein is a lot to think about and a lot to enjoy. Maybe some issues to debate as well; we each have our own opinions, occasionally fiercely divided. But that's a good thing, a thing we need more of.

Reading these essays did make me want to go back and re-read the books, re-watch the movies, re-experience everything that's helped shape my life since I was ten years old picking up a shiny silver paperback from my grandfather's garage bookshelf. More, and perhaps more importantly, it made me want to strive harder with my own craft.

You don't have to be a scholar to get a lot out of this book. All you need to be is a Constant Reader, no matter how casual ... or maybe even a new reader looking to become Constant ... and this will prove a vital addition to your King library.