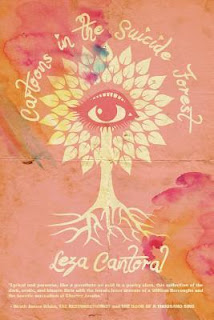 5) CARTOONS IN THE SUICIDE FOREST by Leza Cantoral


Leza Cantoral’s debut collection Cartoons in the Suicide Forest from Bizarro Pulp Press is a phantasmagorical sex blob of pink literary color jelly for your fragile horror mind, body, and soul. The writing is highly versatile, fresh, hip, and creative in all the right ways. Think old school Bizarro Fiction when it first came out. Think Horror double-dipped in the heart of the Beat Fiction era. Think about watching your favorite Saturday Morning cartoons while eating a bowl of sugar coated cereal in your favorite pair of underwear, while still candy-flipping from last night’s psychedelic rave party. We as the reader are introduced to a number of memorably bizarre and horrific circumstances, sexy adult themed fairy tales, and eerily black-ink bleeding cartoons. 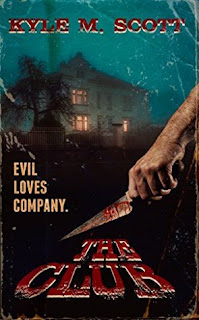 
The book tells the twisted story through the eyes of five separate characters. Four of them amidst a murderous rampage, an over-the-road-trip killing spree across the darker parts of the U.S, and one of their helpless hostages; a gorgeous girl that the leader of the group of misfits, Jason, wants to save all for himself, going into depth the special plans he has for her after he kills and his way with her sister. And, although we as the reader never really get a clear description of any of the characters’ appearance, we do get a strong sense of their emotion, impending doom as the plot thickens, and their overall character, enabling us to connect with them very much the same through their different POV’s on what is going on at the time and how they’re feeling about their overall missions and objectives. The crew hits the deep woods after the cops thicken in town, there are too many risks. After a falling out with one of their members of the team, Conner, he’s wanting to leave before getting caught by the cops, the hostage escapes, as the others hold him over the fire and put an end to his cowardly weakness. Now Jason has the girls all to himself. This is where things really start to get bloody and interesting. After everything the girl and the crew has been through leading up to this point, it only takes a turn for the worse. Her character develops into much more of a fighter, and the content of the book picks up heightened levels of dark and sexual depravity, as the crew stumbles upon a mansion in the middle of the woods and gets a literal taste of their own medicine as they fight for survival of the fittest. The fancy driveway is full of fancy, black luxury vehicles, and there appears to be quite the gathering going on inside. It has to be safe, right? After all it’s a club constructed of some of the richest and wealthiest men and woman in the country. 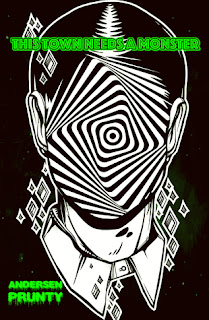 3) THIS TOWN NEEDS A MONSTER by Andersen Prunty


The book introduces us to a man who miserably lives in a small town in Ohio. When he manages to leave the house to visit a friend who’s threatened to commit suicide, he runs into a little situation that ends up turning into a much bigger one by the end of the book. What happens is literally the reason behind how he has always managed his daily social interactions; keep them limited, short, sweet, and straight to the point. Getting involved with others is sometimes a doomsday when having to care about more than just yourself, it’s a cold fact, but very true indeed. Had he just stayed at home and slept it off, nothing in this book would have ever happened, or at least he’d have not known or cared about it as it was happening. So, after his car breaks down and he runs into an underage girl asking him to buy her booze, in exchange for giving him a ride to avoid the long walk home. He slowly realizes that everything in the town is connected and premeditated, including the strange inhabitants there as everything spirals out of control and turns into mass sticky green chaos before his eyes as he gets closer to seeking the truth behind the town monster. Not everything is what it seems throughout the entirety of this book. 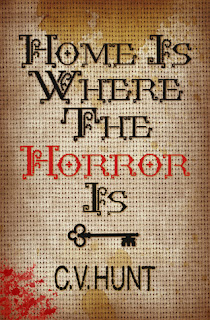 
Evan Lansing makes a living as a photographer. He photographs unusual birth defects, abnormalities and deformities. After a recent breakup, he moves in with his brother, wife, and their kid, until he feels out of place and unwanted. So, he pitches an idea to go stay at their mother’s cabin in the woods. His brother is too busy miserably trying to keep his snobby wife and daughter happy all the time, he hasn’t been able to finish up the remodeling so they can sell the property. Evan decides he could stay there, do the work for rent, and fix the place up to sell. While working on repairs there’s a lingering sadness on the property, and it only gets stronger when the neighbors are around. Upon first glance, there’s two people living next door. An old violent man and a young, bizarre and perverse teenager. But, later we discover a third and much darker entity. Things for Evan start to make a turn for the worse when the neighbors start visiting and coming around more frequently, even managing to ruin his new-found love with a woman he’d met while photographing her rare birth defects on her hands. Evan begins to question his own sanity and reality as his life begins to spiral out of control. He should’ve never came to his mother’s cabin in the woods. There’s much more than the death of his childhood lingering in the woods around him. 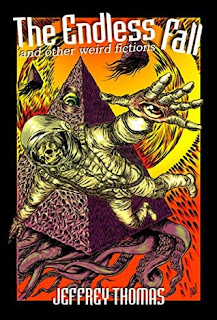 1) THE ENDLESS FALL AND OTHER WEIRD FICTIONS by Jeffrey Thomas

The Endless Fall and Other Weird Fictions is as of recently now one of my favorite short story collections to date. Thomas is a brilliantly talented author, who without error manages to engage the reader into the heart and soul of his characters, often taking them along for the wild ride through his unique imagination as these fourteen weird tales of hopeless horror, cosmic dread, and perverse despair unfold before our eyes. There are many powerful stories here that will perhaps stay with you, like they did for me for some time to come, keeping you on the edge of your dream feet and peeking your head around the corner of the next dark alcoves of your mind as the unknown happens before your very eyes.


Amongst my favorites in this collection were ‘Jar of Mist’, where a distant father seeks out answers to his daughter’s sudden death. At first, he believes it has something to do with her strange boyfriend that up and left her behind for a place called Sesqua Valley, but upon further inspection discovers the truth in a jar of mist at the mysterious antique shop located below her apartment. ‘The Prosthesis’, I found this story very entertaining and accurate as I personally know somebody in this line of work, and it made for a great and pleasurable reading experience as we see a more humorous side of the author here. ‘Ghosts in Amber’, this one is going towards the top as one of my favorite short stories of all-time list! The main character takes us on a trip down memory lane in his boring marriage when he stumbles upon some old memories, something odd leaking from the rooftop, and much more in the old factory across the street. ‘The Spectators’, otherworldly obsidian black creatures pay earth a little visit to check-in and tell you they are still out there watching. While most fear their initial arrival, as they just show up in the corner of a room in your house out of nowhere— the main character in this story embraces its presence, pours himself a glass of bourbon, and has nightly talks to the entity about some of the finer things in life until he goes back to wherever it is that he came from.
Posted by Nick Cato at 1:55 PM