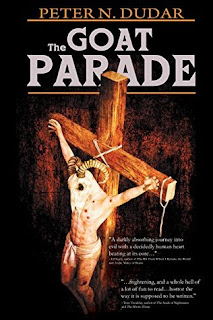 Dudar (author of the fantastic, Stoker nominated A REQUIEM FOR DEAD FLIES) returns with a thought provoking occult horror novel that takes the “deal with the Devil” trope and adds some sinister new edges to it.

Crime reporter Erik Marsh asks to be reassigned to lighter duty after years of gruesome stories. But he’s quickly brought back in when an apparently occultic crime is committed in his young son’s elementary school. He meets a street performer named Svetlana, who proves she has the power to see into minds and just may be able to help him find who is leaving a trail of bodies around Maine.

Recently released from prison is blues guitarist “Tobacco Joe” Walton who learns life on the outside hasn’t become any easier and a former debt owed hasn’t been forgotten. He brings a “crossroads” element to the story that enhances and never takes away from the main cult/serial killer plot.

These three people eventually meet on what is essentially Satan’s playground and come face to face with a brutal cult led by Warren Pembroke, who keeps his followers in line via drugs, sex, and cold blooded murder. The descriptions Dudar gives from some of the cultist’s point of view are bone chilling, especially when one begins to contemplate the afterlife. This line in particular is quite grabbing:
“Hell was real, that much she understood now. The world of religion back on earth was all fables and superstitions, but here in the netherworld, it was all an eventuality.” As the kids say, Spooky AF!

THE GOAT PARADE is a solid old-school styled, no BS horror novel, with children in constant peril, a realistic cast, and a fresh feel to some familiar ground. The portrayal of Old Scratch doesn’t sensationalize him as many stories do, which adds to the impending sense of dread that builds in each chapter. And be warned: the author holds back NO punches during the finale... 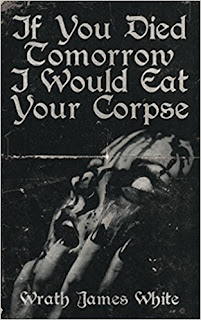 Aside from the poems in this collection, there are also three short stories that fit the horrifically perverted content here very well and add a certain depth to the overall project. Some of my personal favorites were 'Facial,' 'Womb,' 'The Death of Passion,' 'Astral Projection,' 'Untitled #3,' and 'The Last Cabbage Patch Doll.' 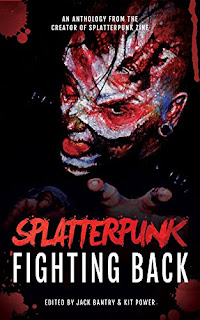 Anything extreme horror AND donating to cancer charity is automatically going to be a double-win in my books; both of those, for different reasons, are important to me. My only regret about this anthology is that it’s another I didn’t have a chance to submit to, but as always that just means I can enjoy and review with clear conscience.

First up, the never-disappointing Adam Millard takes on sirens with “They Swim by Night,” in which a random encounter with a seedy bar act turns into something far deadlier. Then grossmeister Matt Shaw’s “Melvin” starts with someone choking on a disembodied penis and gets weirder from there, and by that point you’re off to the races.

Get into the holiday spirit with “The Passion of the Robertsons” by Duncan Ralston, a phantom limb syndrome with a little bit more in Tim Curran’s creepy “Limb Memory,” and visit the gory end of the world in Rich Hawkins’ “Hellscape.”

John Boden’s “The Going Rate” reminded me of a more graphic version of a Robert McCammon story that has remained in my mind as the scariest thing ever, so, bonus points to him for a short ruthless gut-punch I won’t soon forget.

Plus, experience the talents of Glenn Rolfe, Bracken MacLeod, the killer teamup of W.D. Gagliani and Dave Benton, and Kristopher Rufty. Nothing is safe, nothing is sacred, no subjects are off-limits to these guys.

It IS only guys, though, which is a bit of a letdown, and makes me feel all the worse for missing out on the submission window. Come on, ladies, we need to represent more in the splatters! 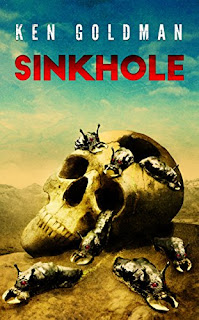 Until now, I’ve only been familiar with Ken Goldman’s work through his short stories, so a full novel made for an interesting change. Especially with a premise involving the ground collapsing under pricey suburbs, nasty slug-monsters, and subterranean horror. Those on their own would have been enough, but history gets involved with several flashbacks to the same nightmare taking place in cowboy days.

The action and descriptions are excellent, as the slug-monsters begin feasting on the residents of upscale Diamond Loop and the workers who were just trying to fix some troubles with the pipes. And not just feasting; sometimes the victims survive, if no longer quite themselves, and go on to commit their own unspeakable acts.

Meanwhile, back in the wild West, passengers on a stagecoach discover a similar situation, their story unfolding in tandem. The historical aspects were okay; I can be a stickler for that but overall was willing to let little nits slide.

As matters on both ends move closer to final confrontations and disastrous conclusions, the threads intertwine in clever ways, connecting the eras, even if some of it seems a little coincidental and/or forced.

My biggest issue, though, was with the dialogue, particularly that involving the younger characters. Lots of exposition in what’s essentially the same voice, shaking me out of the story with “kids don’t talk like that” thoughts.

Tangentially connected to history, I did find the more modern parts had a disjointed feeling with a lot of the cultural references and other details. It felt, reading, as if it had originally been meant to be set in the 1970s or so, but then the author decided to update to 2015 and missed changing some stuff. Tube tops, for instance.

Still, if you’re into creature-features, looking for some Real Housewives of Diamond Loop vs. slug-monsters, like westerns, and appreciate cleverly interwoven timelines, this might well be a book you’d enjoy. 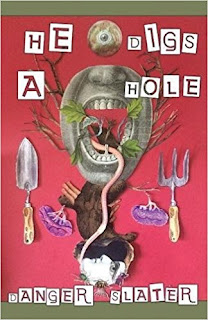 For as much of a goofball he may present as online, damn can Danger Slater write! Each new work from him exceeds the last, pushing the excellence bar higher every time. You might read one and say, “well, he can’t get any better” … but then, stinker that he is, he goes and DOES.

He Digs A Hole is his latest, and it’s one of those where I had to pause several times to just shake my head and go, “wow.” The visuals. The language and word use. The unique voice, bending and breaking the ‘show-don’t-tell’ rule as well as the fourth wall, and time, and space, and reality. I mean, wow.

Now, to be fair, there were also a few times I had to pause and wince and squeal; my recently-surgeried-upon frankenarm made the scene where the protagonist saws off his hands to jam gardening tools in his raw-meat wrist-stumps (don’t dun me about spoilers, it’s in the very first chapter) a particular personal challenge.

But I’m getting ahead of myself. Harrison Moss is your basic suburban everyman, with the wife and the house and the job and the weekend barbecues with the neighbors and the ennui and despair. One day, on impulse, Harrison swallows a seed from a strange tree in the yard, and is overcome with the fanatic urge to dig.

So, he does. Then, when the hole threatens to consume everything, he and his wife jump into it. That’s when things REALLY start getting weird, not even 1/3 of the way into the book. The weirdness progression amps up exponentially, like, to cosmic levels and beyond.

Seriously, wow. This is a whole mind-bending book of wow. 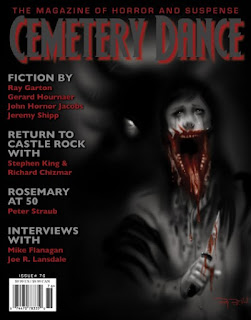 This issue features 8 slabs of new fiction without a slouch in the bunch:

-BLACK WATER RISING by Danny Rhodes: a melancholy look at a man during his final days, Rhodes paints a haunting portrait that aims this issue toward some dark territory.

-In THE HANDLER HAS A TALK WITH LLOYD (by Ray Garton), Lloyd has a face to face talk with the person responsible for his decades of mega success as a folk singer. When child abuse is the *least* disturbing thing on the menu, you know you’ve entered the realm of Ray Garton. A quick & crazy version of the “sell your soul” theme.

-NEMESIA’S GARDEN by Mariano Alonso: an immigrant woman gets a job working for two wealthy senior sisters in a mid town Manhattan apartment, taking care of their garden room. But one of the sister’s reasons for befriending the worker may have a sinister agenda in this smart thriller.

-STRANGER TO THE LIVING by Gerard Houarner: Roger has a relationship with his unborn daughter Sarah, a relationship that helps him and his wife understand their current predicament. Houarner digs deep in an unsettling yet hopeful spook-fest.

-In Jeremy C. Shipp’s THE ARES VEIL, we meet a couple with three kids (one recently gone away to college) and the odd device the younger son learns to use. The always strange Shipp will make you re-read the last two sections of this one and then your spine will begin to chill as it all becomes clear. Some brilliant story telling here.

-SYSTEMS by Nathaniel Lee is an effective nature-gone-amuck tale about a man’s training of wild crows that goes way too far. Features a RARE nightmare scene that actually makes the story shine, so don’t skim it!

-THE TRANSLATION OF AQBAR by Aaron Worth finds a famous London magician named Ugolini performing his act at a private home. But the affect it has on two brothers gets under the skin of a doctor working with one of them at an asylum. A trippy offering from Worth.

-Finally in PATCHWORK THINGS by John Hornor Jacobs, 11 year old Franklin goes on a hunting trip with his Uncle Burl and shoots an unusual creature. Years later, after his mom dies, Franklin moves in with Burl, and reveals to his uncle what he has become. A well done backwoods creeper.

All your usual non fiction columns are up and running, including another great piece by Thomas F. Monteleone (this time he dissects social media and it’s as hilarious as it is depressing), plenty of Stephen King news and reviews courtesy of Bev Vincent, and entertaining reviews by Ellen Datlow, Michael Marano, and a sad look at malls and bookstores by Mark Sieber. Add a great introduction to ROSEMARY’S BABY by Peter Straub (for its 50th anniversary), a nice interview with Joe Lansdale by Chris Hallock, and a boatload of book reviews and other surprises and you have yet another winning issue. Grim cover art by Ray Dillon makes this look sexy on your coffee table, too... 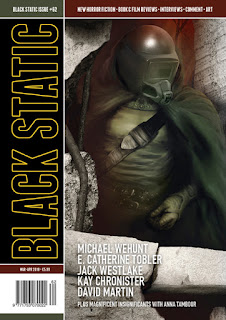