NOTE: Please see bottom of main page for submission info. You may not be able to see it if you're reading on a mobile phone. Thank you. 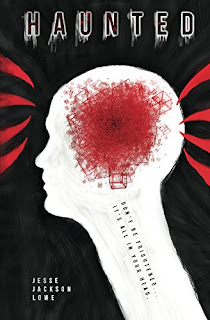 Okay, this one blindsided me … I went into it expecting (obviously) a haunting. Troubled family, strange old house, inexplicable events, etc. The popular athletic older brother, the precociously smart younger one, the distracted dad with obsessive interests, the dissatisfied mom who wants more out of life, odd architecture and history, the sounds in the walls, the weirdness in the cellar, is it all in their heads or is there more … you know, haunting stuff.

I did get all that, make no mistake. It was the extra stuff that came as a blindsiding surprise, one that in my case, personally hit close to home. Jacob, the smart younger brother and POV character, is diagnosed with an inoperable brain tumor. Talk about ‘is it all in your head’. The tone snaps from eerie horror to mind/body horror, the details taking him through treatment and radiation extremely legit. The procedures, the fatigue, the swept-along sense of powerlessness … yeah. Been through a lot of that myself all too recently and it gave me deeper chills even than the creepy stuff going on in the house.

Which stuff is, may I say, extremely creepy in a keeps-you-guessing kind of way. Masterful imagery, described just enough to let the imagination conjure. Mysteries hinted and tantalized without being conveniently explained or tidily wrapped up. Many of the common haunted-house tropes are simply absent, omitted with such skill you don’t even notice, and don’t miss them.

Best of all, I thought, was the way the story presented the relationships among the various characters, the changes they go through, the effects Jacob’s illness has on those around him, and on Jacob himself. The dynamic between him and his brother Oliver is vividly compelling and complex, sometimes at odds, sometimes supportive, challenging, conflicted, feeling very true to life.

This is not a happy book. This is a painful and difficult book. But a powerful one, and a real departure from run-of-the-mill. 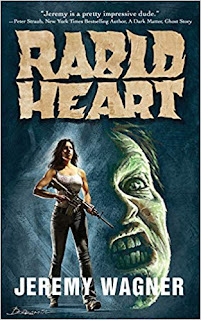 Rhonda Driscoll lives with her Marine Colonel father and a bunch more survivors in a fortified military base. Victims of a Necro Rabies pandemic have taken over North America and most of the world. On a scouting mission, Rhonda sees her zombified fiancé and realizes her feelings for him haven’t changed.

After bringing him back to base wearing a ball gag, she learns her father plans to kill him and decides to make a run for it in a well equipped military Humvee. Her plan is to head south to Florida and try to start life over with her undead lover.

RABID HEART is another in a long line of road trip zombie tales, but this time Wagner relies heavily on a romantic angle which gives much of this a fresh feel.

Rhonda comes across a crazy family and manages to rescue two kids who join her on her journey, a journey that winds up inside a football stadium packed with Cujos (the name given to the zombies by government officials). Descriptions of zombified football fans getting their heads blown off brought a smile to my face, but your mileage may vary.

Rhonda’s undead fiancé, Brad, mumbles her name and provides some unintentional laughs, but this slight issue aside I think zombie fans will have a blast here, as the virus has also spread to rats and a gore-ious “Super Cujo” in one of the novel’s most suspenseful scenes.

Zombies and romance worked well in the 2004 film SHAUN OF THE DEAD, and here Wagner gives this sub-subgenre his own putrid flavor.

A quick read and a pulpy good time. 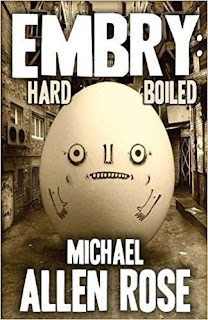 Egg-noir. No, really. This is a book about anthropomorphic eggs. And chickens. And society. And prejudice. And murrrrr-der. Yes, there will be egg-jokes and egg-puns and eggy wordplay. Yes, there’s wonderfully egg-centric (ouch sorry, that one actually was unintentional, believe it or not) world-building.

It’s a world not that different from ours, with cities and churches, laws and law-enforcement, and law-breakers. It’s a world where there are the haves and the have-nots. Where there are crimes, drugs, corruption. You know, the usual.

It’s a world where a tough-talking wise-cracking detective from the bad part of town can suddenly find himself framed for a messy high-profile murder. Except, well, the detective is a chicken. Or, as they’re more commonly called, an ‘embry,’ a second-class citizen, an unfortunate accident as far as the elitist eggs are concerned.

Our detective doesn’t even have a name of his own, is just known as “Embry,” and he’s got to hustle if he’s going to solve this case and clear his … well, name … before the cops catch up with him, or the real culprits eliminate him as well as everyone else he cares about (does this list include a dame? you better believe it does; or a hen, as the case may be).

This story has all the noir trappings you might expect, as well as some deviously clever twists and takes you might not. Humpty Dumpty as a religious icon works way better than it should, there’s darkly ominous stuff with all the king’s horses and all the king’s men, the engineering of tofu “chick’n” monstrosities is creepy as could be.

Witty, gritty, delightfully well-written, cuttingly astute, and a lot of fun … this would make an amazing animated feature or series. Brilliant stuff! 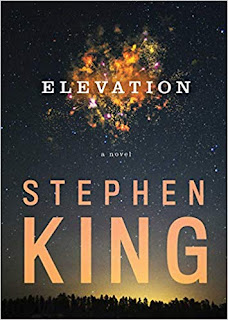 Scott Carey has noticed he's been losing weight, yet he continues to look the same size. Not wanting to go to a hospital, he trusts his old friend (and doctor) Bob Ellis with his story. Things quickly get strange, as Scott tries to understand what's happening to him as he attempts to befriend a new couple in town who run a health food restaurant.

Set in Castle Rock, King delivers one of his quieter, and dare I say it, sweeter stories of acceptance, prejudice, and ultimately, sacrifice. This quick read reminded me of a cross between the author's novel THINNER and his son Joe Hill's great short story POP ART. An enjoyable small town drama featuring just enough of a fantasy element to please King's legion of fans. Loved the ending. 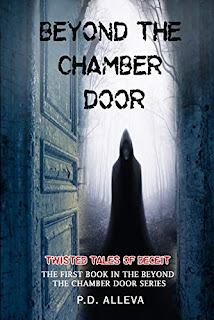 TWISTED TALES OF DECEIT: THE FIRST BOOK IN THE BEYOND THE CHAMBER DOOR SERIES by P.D. Alleva (2018 Quill and Birch / 189 pp / trade paperback & eBook)

The first in an upcoming series, this collection of three novellas gets things off to a more than promising start.

First up is “The Calculated Desolation of Hope,” which conveys a total and deliberate ‘Hotel California’ vibe … a dark desert highway, a glimmer of light, a weary traveler stopping at a mysterious establishment … many quite familiar themes and snippets of phrasing occur throughout … on one level, it does detract a little from the storytelling since you soon find yourself playing spot-the-reference … on the other, it adds layers of depth and texture that work very well. And then it goes darker, weirder, more damning, and much more dangerous.

The second piece, “Somnium,” follows a daydreaming college student on a labyrinthine journey of psyche and personality as he pursues his ambitions to become a playwright. He’s soon lost in arguments with himself, at risk of losing far more than his opportunities and his mind.

“Knickerbocker” is the main course of this book-meal, and it is my personal favorite of the three. It’s a modern-day, self-aware revisiting of the legend of Sleepy Hollow with overtones of addiction and obsession. Complete with gangly schoolteacher Isaac Crane, no relation but strong resemblance, newly arrived in the quaint community to discover an interest in a lovely lady, a bitter clash with a bullying rival, the upcoming local Halloween festivities… and, looming like a shadow over all, the legacy of the infamous Horseman. Little does Isaac suspect what’s really going on in Sleepy Hollow, and what’s in store for him. 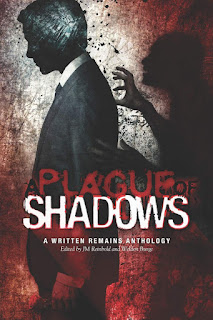 This nifty anthology comes to you courtesy of Smart Rhino Press by way of the Written Remains Writers’ Guild, and opens with a poem that sure won’t make you yearn for the quaint good old days … “Starving Time, Jamestown 1609” by Jane Miller is a grim and bleak shiver to start things off.

My personal top picks of the book are:

“Bottom of the Hour,” by Phil Giunta, in which a guy with an unusual gift/curse to detect impending death acquires a car with its own deadly connections;

The slow-building chill and nasty shocking conclusion of Graham Masterson’s “Neighbors From Hell;”

Ever-clever Jeff Strand maintaining his place as the genre’s wicked jester with “The Fierce Stabbing and Subsequent Post-Death Vengeance of Scooter Brown;”

Maria Masington’s uncomfortably accurate depiction of those mean inner voices in “Bark of the Dog-Faced Girl;”

The hauntingly lonely and somehow beautiful hopeless horror of acceptance in “Finding Resolution” by Patrick Derrickson;

“The Angel’s Grave” by Chantal Noordeloos, when desperation leads a man to a grisly new career choice (that casual offhandedness of the phrase ‘coffin birth’!);

and Jennifer Loring’s “Dollhouse,” because come on, who can resist a good creepy-doll tale?

Those, though, aren’t even half of the table of contents. You’ll find a range of eras and settings, evils both human and inhuman, the gamut of the whole candybox sampler where some are sweet, some are dark, some are gooey, and some have crunch.