NOTE: Please see bottom of main page for submission info. If you're reading this on a cell phone you probably won't see it, so boot up the lap top... 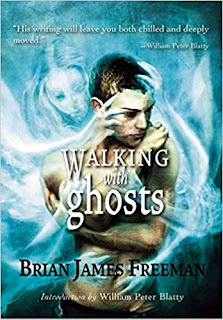 Simply seeing that this book had an intro by William Peter Blatty was enough to rock me back on my heels going “wow;” that’s a goal to which not many even dare aspire, so to actually score one? Saying such honest praise? Gave me goosebumps in a good way. And that was before I even got started on the stories.

Now, a few of them I had encountered before in their other appearances, but reading them collected together like this makes its own special magic. Many of them are interconnected, threads from some subtly woven through and into others, recurring characters glimpsed or referenced from other points of view, creating a vibrant and believable world a mere sidestep or so removed from our own.

It’s a world of dark chills and nail-biting suspense, with some sudden and very nasty surprise twists. An unexploded landmine … the imminent end of the world … grief turning to horrible discovery … the yearning desperation of nostalgia and lost hope … the fears here best touched upon aren’t so much fears of monsters but the monstrousness of the human psyche and condition, and of life itself.

Freeman demonstrates again and again a deft skill at building up empathy, then yanking the rug out from under your reading feet to drop you, shocked, into terrible realizations and truth. I literally gasped aloud on no less than three different occasions, though I won’t tell you which stories they were, so you can be just as blindsided as I was.

Great writing throughout, the horror often quiet and subtle but not always so (plus those moments of deep, chilling shock!) … and perhaps most potent of all, the encompassing reminder that whatever we go through, whenever it’s at its worst, we’re always along. Brrrr! 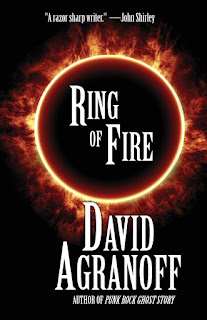 I love extreme horror and cheesy natural disaster stuff, so the combination of the two seems like it’d be an automatic win for me; I dove into this one with considerable excitement. I wanted to enjoy it, I really did. I thought I would. But … well … sorry to say, it’s one of the few Deadite books that’s let me down.

The premise is good solid action-movie fare: it starts with what at first appears to be merely out-of-control wildfire season ravaging the environs around San Diego, only to reveal underlying man-made causes, conspiracies, and corruption, all leading up to something even deadlier.

And the timing’s right; I read it at the tail end of yet another summer when fires raged across half the country while the other half wallowed under floodwaters, the climate change debate raging just as fervently, distrust of FEMA and other organizations at a height. Throw in the shutting down of essential services, and an outbreak turning people into violent crazies, the chaos and panic and confusion …

With all those elements, it should have worked, drat it, and I’m disappointed it didn’t. There were too many characters, way too many with similar names and not nearly enough distinction or attention or chance to get to know them or care. Too much jumping around from one point of view or scene to another, to show the developments from many different angles, but that only made things seem sluggish. I found myself, hate to say it though I do, actually kind of bored. Even when it got to the full-on horror, it lacked oomph somehow, wasn’t nearly as ‘extreme’ as I expected or wanted.

So, yeah … not mad, just let down and disappointed. It could, and should, have been so much more! 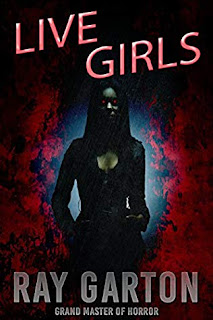 The work of Ray Garton has always been a little guilty horror pleasure of mine. He’s one of my favorite working authors to date. I don’t think I’ve read anything he’s released that I didn’t like, and his stories just always seem to work, and they stick with me far after I’ve read them. This rerelease of his vampire cult classic, LIVE GIRLS from the 80s is without exception. The author’s uncanny ability to spin an original tale different than anyone else, whilst managing to entertain, spook, shock, turn-on and terrorize the reader is beyond admirable. In this book, he manages to do the same while delivering to us his take on the vampire trope. Now, keep in mind… at the time, vampires weren’t these glittery teeny boppers high on sex before marriage with pretty boys with nice hair hailing from the glitter section in Outer Space like your kid sister’s bedazzled jewelry set. No, vampires were very different. Very scary. Very goth business casual, if you will. Secret society’s that consumed human blood and flesh and held sentient hierarchy very dear to their immortal blackened souls.

Davey Owen embarks on quite a journey when stumbles onto the neon lights flashing on Times Square in NYC. Some lights flashing much brighter than others, when he stumbles into a trashy peep show, and is instantly drawn to the female behind the cage. After a bit of sexy time, he soon finds himself craving the mysterious woman like there’s no tomorrow. She’s all he can think about. Davey can’t get enough of her as the spot on his manhood begins to spin a much deeper, darker tale of love and hopeless despair, as the mysterious woman begins to lure him in deeper and deeper to her mystery with each and every acquaintance, as his life begins to quickly unravel at the seams.

Easily one of my favorite vampire books to date. It’s an all-around great horror book jam- packed with flashy bright neon lights, trashy sex, suspense, gore, and mystery. What’s there not to like about it!? 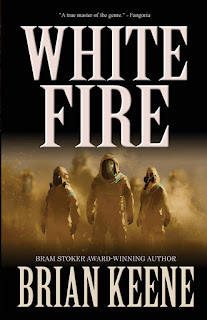 Captain Tom Collins and CDC Phil McLeod are transporting a military created virus through a small town in Illinois when a freak tornado damages their van and unleashes the bio weapon. The appearance of a mysterious white-haired man lends a supernatural element as the town is quarantined and the disease is attempted to be contained.

While the story is familiar, Keene’s fast paced writing keeps things exciting and the aforementioned supernatural angle brings up the author’s past stories, so fans are in for a treat.

A fine entry in the killer virus subgenre that can be read in a single sitting. Nifty ending, too. 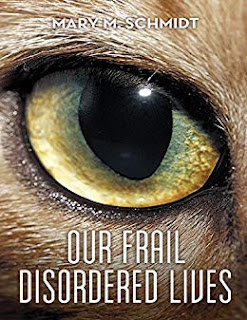 I like the gamble of trying a book knowing little else about it but title and author … it’s akin to a blind date, or a grab bag … will it turn out to be a great time, or prove a dud? This one, definitely the former! Once I started to read, I was along for the ride with no looking back.

Even more, because the title somehow led me to expect a collection of moody, woeful, sepia-toned stories and vignettes (of which there’s not a dang thing wrong, make no mistake!) and instead I was dropped feet-first into the deep end of a delightful and irreverent devil-romp.

Roach is one of the OG fallen angels who’s been with Satan since the beginning. Which is a long time to stew over old grudges, particularly the bitterest pill of not having been allowed to get in on that sweet Divine Comedy action with Dante and Virgil. Instead of becoming a famed name, he’s forgotten, just another diabolical flunky. And he’s had enough.

Going rogue, escaping to the mortal world, Roach seeks to get some payback, corrupt a few souls, collect a few sinners, strike a few deals of his own. Aided on the sly by a friend back in the version of Hell’s IT department, he’s able to cover his tracks and stay a step ahead of the exorcists and bounty hunters long enough to whip up a little havoc.

At the center of Roach’s scheme is Larry, a liar and faker and all-around jerk who only cares about himself, as well as Larry’s put-upon wife, their kids, his wife’s sister, and the neighbor who’s been harboring a grudge against the sisters since grade school. A nudge here, a push there, one thing leads to another, and soon events have spiraled wildly into pure hilarity. 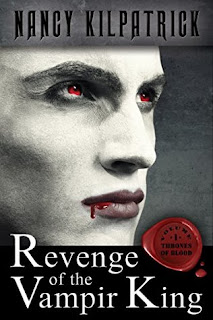 Remember way back when Anne Rice suddenly went from broody/bloody/moody vampire gothics to those spanky-bondage Sleeping Beauty books and everyone was real shocked, but then the gates opened and we entered a whole new world of paranormal smut?

This book reminded me of that startling turning-point moment in the genre; I went into it thinking it’d be epic dark fantasy combined with bodice-ripper-style paranormal romance … warring kingdoms, vampires vs. humans (called here Sapiens), a captive princess, a cruel king, their turbulent hate-at-first relationship turning into something else, against a backdrop of court intrigue and betrayal, you know how it goes.

Well, I did find all that, yes, to be sure, but with quite a bit of surprisingly graphic, harder-edged sex scenes than anticipated. Not that I’m complaining, mind you. Just, y’know, be ready.

Summary-wise, Moarte is the vampir king mentioned in the title, who’s just received the daughter of his hated foe as a prisoner and decides to make her his bride as part of his plan for revenge. This decision doesn’t go over so well with many in his court.

Meanwhile, Valada, the princess, finds herself reevaluating the world as she knows it, and her relationship with her father in particular … but how much is real, and how much the unnatural manipulation of the vampirii?

The biggest problem I had with this book was how much of the plot hinged upon lack of communication, characters who for a slew of sometimes-feeling-really-stretched-and-contrived reasons can’t just talk to each other. Misunderstandings ensue, conclusions are leaped to, feelings are hurt, etc. Fine in a farce or goofy Three’s Company sitcom, tiresome and frustrating otherwise.

As the first in a series, it’s a strong and promising start, and I look forward to reading the others fairly soon.