NOTE: Please see bottom of main page for submission info. If you're on a cell phone you're probably not going to see it. Bust out the laptop, amigo... 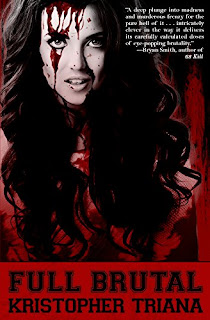 Three for three now … three Kristopher Triana books I’ve read each at one awestruck sitting. My initial prediction that he’s destined for the extreme elite sure is proving true. I am just jawdropped. This book may very well be the most evil thing I’ve ever read in my entire life.

It’s perfect. The perfect evil, the perfect exploration of utter sociopathic monstrousness. Most evil of all, it could totally happen. Nary a breath of the paranormal to be found, either; it’s pure human nature at its most horrible.

Take every ‘mean girls’ movie or story throughout history, distill them down into a single droplet of ultra-concentrated nitroglycerine plasma MEAN GIRL, and that’s what we have here. Have said it before, will no doubt say it again … girls can be vicious. Spiteful, destructive, lethal, and cruel. Never mind simple serial killing. I’m talking sheer, absolute, utter destruction.

Meet Kim. Kim seems like she should have it all going for her. Pretty, popular, permissive single dad with adequate money, a good student, a star cheerleader, squad of friends, bevy of interested boys. But she’s not happy. She’s bored out of her mind. She wants to make a big change, and decides that losing her virginity is the way to go.

Only, she doesn’t want it to be the same dull story as everyone else, so she sets out to seduce an older man. A teacher. Then she discovers maybe sex isn’t such of a much, but the possibility of outright ruining lives and destroying people is a serious turn-on.

Most evil thing I’ve ever read. And that’s saying something. Wow. 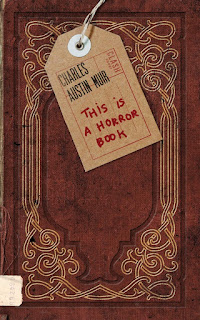 Okay, confession time, shame on me, I still haven’t seen Mad Max: Fury Road. But, after reading this book, I know by the time I eventually get around to it, the experience will now be weirder than the filmmakers perhaps intended. Thanks to Charles Austin Muir and his naughty obsession with Charlize Theron’s Furiosa, which features prominently throughout these interlaced tales.

First off, take any regular rules of expectation and reality and chuck them out the window. You’re in for a wild, clever, convoluted ride of fourth-wall breaking, author insertion (in more ways than one, see Furiosa reference above), second-person, genre references, names and in-jokes, and all kinds of craziness.

The first story is about a couple of guys who, while drinking and watching horror movies on Halloween, decide it’d be a good idea to read from this ominous old book one of them found outside the convenience store. Gotta love it when even people who by rights should know better go and do stuff like that, don’t you? At least then they don’t have the gall to act surprised when it all goes hideously wrong!

It’s followed by sinister goings-on at the local library, pop-culture slasher and action heroes on a mission that takes a different-kind-of-slashy turn, some uncomfortable insights into writer critique groups, creepy-guy obsessions, alien invasion, and more.

Definitely a book where the more you know / the closer you are to certain circles, the more fun you’ll have … but raucous and raunchy and fun either way! 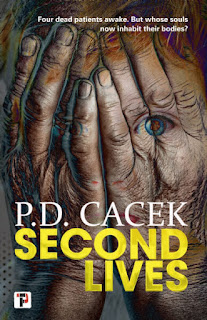 It has been a few years since the last full length novel from Cacek, and with SECOND LIVES she makes a powerful return to the form.

In this deep look at reincarnation, Cacek introduces us to four people (eight, technically) who have been declared dead, yet wake with new personalities. Nearly half the book is spent not only on the recently deceased, but we get backstory on the past lives whose souls are about to be brought into modern times. I think some will find this first half a bit confusing, but stick with it as Cacek manages to keep the reader interested and I found myself emotionally invested in each one.

I love how the author handled one character in particular, a Jewish man who had died back in the 1920s, and now has to deal with living as a person whose life wasn’t exactly in agreement with his own strict beliefs. Kudos for each of the other reincarnated souls, dealing with modern technology, illnesses, and other issues I’ve never seen dealt with in similar stories before. This here is no 70s b-movie...

While not scary in the traditional genre sense, the story’s third section is heartbreaking and forces you to consider some life and death issues that may not have occurred to you before, and hence makes SECOND LIVES one of those rare reads that becomes more than a standard horror novel. And for that, this is not only one of Cacek’s finest works but one any fan of supernatural fiction will savor. 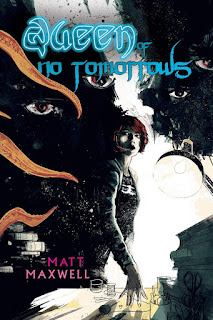 Amateur historian-type that I am, I was hooked right away by the notion of a story about someone who’s not merely a restorer, copier, and translator of old tomes, antique books, and manuscripts … but a forger as well.

Cait, our protagonist, has kind of a Remington Steele gig going on with her career (talk about history, showing my age there, egads), playing ‘assistant’ to a reclusive expert who doesn’t actually exist, so her work will be taken seriously by the musty boys’ club of academia and collectors.

Heck, I would’ve gladly read the whole thing as a thriller, even if it hadn’t then gotten into the paranormal weirdness. But hey, paranormal weirdness is also good! Cait’s current project is her masterpiece, the rare Smoking Codex, about a mysterious Mesoamerican deity.

It’s so rare, in fact, that nobody’s ever heard of it. Which makes sense, because, like Cait’s mentor/boss, it doesn’t actually exist. Cait’s creating the whole thing herself, with an eye toward stirring up rumors of the discovery of a one-of-a-kind relic, to land the big sale and secure her reputation.

The problems really start when members of a gang/cult called No Tomorrows want the book before it’s finished, and know details from it they shouldn’t possibly know. Things Cait hasn’t even written yet. They want her, too. And, despite their scary reputation, despite a series of ritualized murders, Cait can’t help but be curious. Is she somehow predicting the future, or creating real magic? What is this power, where does it come from?

Neat characters, fascinating concept, solid writing. It did feel a little sparse and rushed overall, though. I wanted more detail, more depth, more fleshing-out and backstory. Really nice to see something in this vein that wasn’t yet another medieval relic! 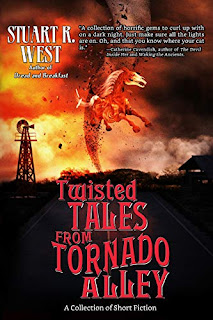 Have never been to Kansas, and it’s perhaps just as well because just the very idea alone of tornadoes scares the everlovin’ heck out of me. The random capricious destruction! How could anyone stand to LIVE there, where it happens often enough to be seasonal??? Then again, I grew up in earthquake country and could never understand why people who didn’t were so freaked out. All what you’re used to, I guess!

This book, thankfully, is not about killer twisters. It is, however, about Kansas, as presented in short-story collection form from the mind of Stuart R. West. It opens with a folksy chat introduction, kind of like what King does in Needful Things to help set the stage and give some teasery previews of what you’re in for.

Though, after reading “Bagworms” I might almost have preferred killer twisters … a nice drive in the country when everything’s covered in cocoons and silken webbing? Eek yikes nope. Took forever for my skin to stop crawling, and that was even without considering what came out of those cocoons …

The other tales run a gamut of madness and murder, family tensions, small-town witchiness and wickedness, indignant local legends, purgatorial hauntings, the trials of adjusting to vampire life, strange things that grow in the basement, a quick dental checkup, and a journey into the depths of an underground city where terrible creatures do terrible things.

As a bonus, it includes a peek at the opening of the author’s novel “Dread and Breakfast,” which is also a good one! Well worth checking this out. 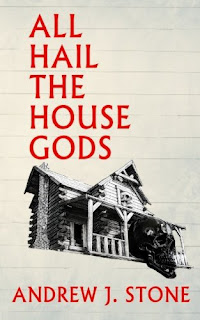 This genre certainly does produce some peculiar post-apocalyptic settings! In this one, the remains of humanity exist in a strictly-structured society designed around couples producing children … not families, since the children are taken away to be raised in the Offspring Oasis … only seeing their parents during brief monthly visits …

… or when one of the children is chosen by lottery to be sacrificed to the House Gods. Which are, well, houses. Animate, living houses. That eat people. How? Why? Backstory? Never really explained, and, doesn’t really matter. It just is, that’s the world, that’s the way it works, that’s one of the neat things about bizarro.

Not all of the humans are happy with this arrangement. Kurt’s wife Katie is one of them, or becomes one following the sacrifice of their eldest son. She organizes a small group of resistance fighters with two main objectives: stop having babies, and find a way to destroy the House Gods.

Kurt, meanwhile, isn’t so sure. He doesn’t want to lose any more children, but he doesn’t want to get in trouble with the authorities for failing to couple. He’s also met Devin, a guy who believes there is another way to end the hostilities. There are, Devin says, GOOD House Gods, who could be convinced to stand up against their fellows.

So, Kurt and Devin undertake their own clandestine missions to find and talk to the good House Gods, while Katie and her cohorts are building weapons and planning their attack. And the time for the next lottery draws ever nearer …

Well-written and disturbing, taking some sharp and insightful pokes at various social issues, this is a book that will entertain but unsettle, and make you think. 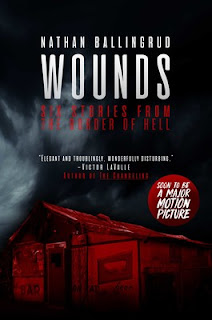