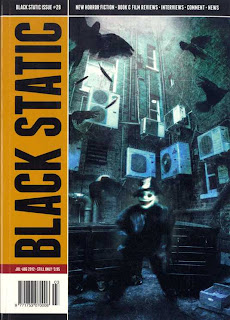 BLACK STATIC No. 29 (July-Aug 2012. Order from: Black Static No 29)
The latest issue of the UK's (and the world's) best horror fiction magazine comes in a new, smaller format, looking more like a trade paperback than a magazine.  Which is no biggie, really, but the magazine feel is definitely gone. Come to think of it, I'm not diggin' this new format at all! BUT...it's what inside that counts...
After the usual interesting commentaries by Stephen Volk and Christopher Fowler, the issue's first story, 'Sunshine' by Nina Allan, serves up a truly different take on the vampire thing. In fact this creature's so different I wouldn't label it a vampire (perhaps a leech-pire?). But whatever it is, Allan gets the chills going and ends up delivering this issue's best tale.  Renee Carter Hall's 'Horsemen' is another creature feature with a revenge sub-plot. It's well written and its short length leaves no room for filler.
'Chodpa' by Baph Tripp, about a guy who finds himself in a bug-infested city, manages to give the willies while creating a sense of genuine dread. Great stuff but not for the bug-ickish.  I wasn't too crazy about 'Shark! Shark!', Ray Cluley's homage to SyFy channel shark attack films. It tries to be fun but something about it just doesn't work.
Tim Lee's 'The Counterweight' features a college teacher who is affected by a spell cast by one of her students. It's perhaps a bit lengthy for its purpose, but well worth the time to read.
And as usual, there's plenty of book reviews from Peter Tenant plus an interview with author Nicholas Royle, as well as Tony Lee's in-depth DVD reviews (my favorite being for 'Airborne,' a new direct-to-DVD feature starring Mark (Luke Skywalker) Hamill). THANK YOU Tony for taking this bullet for the rest of us!
Great stuff...I just wish they'd get back to the magazine format. 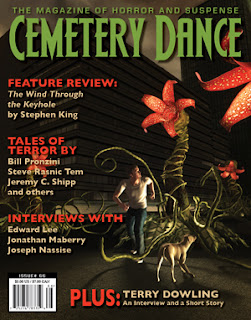 CEMETERY DANCE No. 66 (2012 .. Order from: Cemetery Dance no. 66)
While I'm not a fan of Westerns, Bill Pronzini's opening tale, 'Lines,' is a quick and violent chiller set in the Nevada desert that gets things off to a good start. Steve Rasnic Tem's 'Scree' is a disturbing, downbeat thriller, about a man whose life unravels in a most unusual way.
My favorite of the issue goes to Jeremy C. Shipp's 'Inside,' which I've read four times now. It's a surreal horror/scifi hybrid dealing with children thrown into a truly uncomfortable lifestyle. Having read most of Shipp's novels and short stories, I can say this rates among his best work.
Terry Dowling, David Lee Summers, and Sophie Littlefield also provide solid reads.
Nancy Greene gives an informative interview with author Jonathan Mayberry, Michael Lohr chews the fat with extreme horror king Ed Lee, and Bev Vincent gives his usual barrage of Stephen King news.
My favorite non-fiction piece is a wonderful tribute to film director Val Lewton by author Ed Gorman, and Thomas Monteleone celebrates 20 years of his 'Mothers and Fathers Italian Association' column, which alone is worth the price of this (and every) issue.
Nice to see CD back on a regular publishing schedule (this time the book reviews are a bit more recent than in past issues). Check it out. 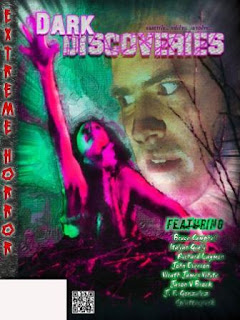 DARK DISCOVERIES No. 19 (Fall, 2011. Order from: Dark Discoveries No. 19)
While 2 issues have been released since this one, this "Extreme Horror" special is worth taking a look at if you've missed it.
This entire issue is a tribute to the "Splatterpunk" movement of the 80s, and starts off with a real doozy from Ed Lee titled 'The Table' (it's a "vintage reprint" but the first time I've read it). Other stomach-churning tales come courtesy of John Everson, J.F. Gonzalez, Jason V. Brock, a never-before-published piece by the late great Richard Laymon, and my favorite of the bunch, 'Big Ernie's Tattoo Shop' by Wrath James White, about a poor soul who goes to get a tattoo in memory of his late mother only to find himself the victim of a strange cult.
There's also a nice interview with Bruce (EVIL DEAD) Campbell, another with Jeff Burke of Deadite Press, and one more with FANGORIA magazine's own Chris Alexander.
John Skipp gives a great essay that blames director John Waters for indirectly inspiring the splatterpunk movement (as well as the World Horror Convention's "gross-out contest"). There's also a lengthy exploration of Splatterpunk and extreme horror by J.F. Gonzalez, not to mention a real surprise for fans of the original FRIDAY THE 13th film and plenty of more little tid-bits.
'Tis a bloody good show, despite a few articles that feature eye-straining small fonts.
Posted by Nick Cato at 11:36 AM