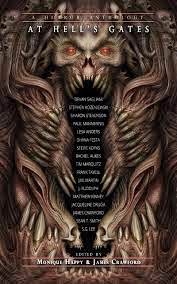 The first in a projected series of anthologies to benefit the Intrepid Fallen Heroes Fund (https://www.fallenheroesfund.org/), a worthy cause in support of members of the armed services and their families. For this volume, seventeen authors teamed up to contribute short stories set in or tied to their other works.

I love stuff like that! When it’s connecting to a book or series I’ve already read, it’s like a bonus feature … and if it’s a fictional universe with which I’m unfamiliar, it’s a great way to sample tantalizing introductions. The only downside, if it can be considered a downside, is that I then end up with a list of new stuff to add to my TBR (oh drat!).

In this one, the majority are zombie apocalypse stories, several different and fun takes on them. Just when I was starting to wonder if it was all zombies, some demons, ghosts, vampires, and more everyday evils began making their appearances.

My absolute stand-out favorite of the bunch has to be Stephen Kozeniewski’s “Exploding S*** Zombies.” Set in the same world of his fun Ghoul Archipelago (see my previous review), it is every bit the outrageous gory hilarity you might expect from the title. But, really, if zombies just eat and eat and eat, eventually something’s gotta give …

Some others that I particularly enjoyed include:

Jacqueline Druga’s “The Husband,” which might just resonate a little too strongly for those frustrated members of inequal partnerships, who’ve just finally had enough. I’m reminded of some quote or other about long-time marrieds who, asked if they’d ever thought of divorce, replied with, “Divorce? Never. Murder? Every day.”

Frank Tayell’s “Undead Britian” turned out to be a much more haunting and intimate tale of family survival than I first expected, as a woman on a mission a year after the outbreak flashes back to memories of how she got where she is, and why she has to do what she has to do.

“Ollie Ollie Oxen Free” by Shana Festa shows another facet of the story in her first Time of Death book, Induction (another I’ve previously reviewed). That one opens with a couple of nursing students at the hospital where things go wrong, then follows the adventures of one of them; this story answers the questions of what ever happened to the other.

Paul Mannering’s “Princess and the Flea” is perhaps the most purely sinister and unsettling of the bunch, in a far-future setting some 200 years after the zombies took over, as the survivors have turned to some desperate methods of farming and tending their herds.

“Hour of the Beast,” by J.M. Martin, is a nicely done dark fantasy tale, a non-Earth setting but with classic and timeless elements of love and betrayal, immersed in a sort of moody gothic old-fashioned feel.

I will definitely be watching for future installments in this anthology series, and keeping an eye out for more from these folks! 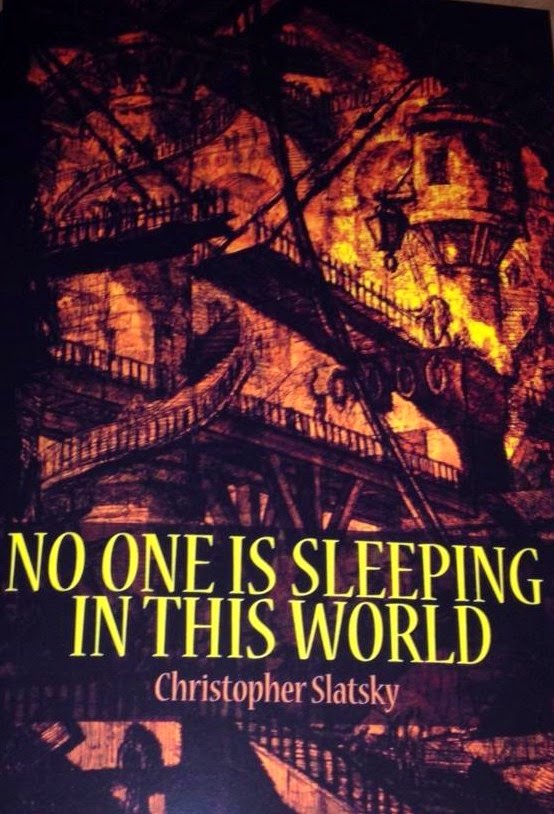 Julia & her boyfriend are filming a documentary on the architecture of the Alexei Building, which is located on the seedy side of town. And before they even enter, it's apparent they're in for much more than they bargained for.

Slatsky's Lovecraftian yarn reads like a compact version of Simon Clark's 2005 novel THE TOWER, and while it's nothing groundbreaking, it's a quick, satisfying, well written read. 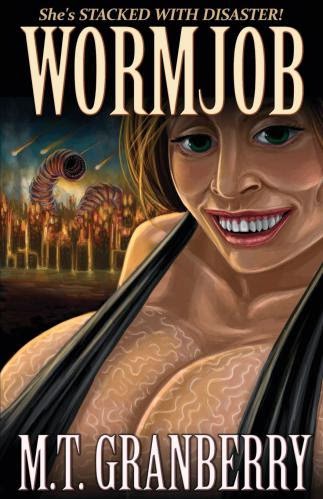 I’d been planning to pick this book up at Bizarro Con from the moment I saw it, and did so as soon as I had the chance. This was before I heard the author’s excellent performance – not a reading, but an evangelical sensation! – and even before I’d tried out half a glass of the special-brew cider in its honor (half a glass only because I am a total lightweight and wimp).

Well, and after those added experiences, I was all the more eager to plunge into this tale of squirming canyonesque cleavage! How could you not? Look at that cover; is that the tackiest or what? This is some pure, unabashed, crazy sleazy fun right here!

And let me tell you, folks, it more than exceeded my expectations! Those cups did not stop at merely runnething over … those cups weren’t even cups for long, but became soup tureens, then punchbowls that runneth over … from gazongas to megazongas of doom.

Filled with live worms. Forget those stupid must-increase-my-bust exercise girls did in middle school when I was young. Forget implants of saline or silicon. Worms are the way to go, injectable colonies of them that feed on fat as they make mountains out of molehills. (side note: fat-eating worms? as with Wrath James White’s Voracious, I gotta admit there’d be a degree of temptation ...)

Shari, flat-shamed for as long as she can remember, is only too eager to undergo the treatment. Soon, she has all she ever wanted, and more. What she earns as a stripper now can easily cover the custom-made clothes and other required adjustments to her life. She even meets a new guy, for whose sake she’ll tinker with her worm-control medication to make all his dreams come true.

Bad idea. Worse idea because, unbeknownst to Shari, one of the worms in her heaving, swelling engorged endowments is not like the others. One worm is different. Angry. Hungry. And growing.

Before long, Shari is lopsided to say the least. Her wormy bosom is on a rampage, and when she seeks help at the fancy clinic where it all started, she and her vengeful passenger discover that they do all kinds of other procedures there at AUGMENTA BIOLOGICALS.

A definite hoot about infinite hooters, this may not be one to leave sitting out if you’re expecting normal respectable company over. It’s also quite the cautionary tale … few of us may ever be satisfied with our looks, but, sometimes you really can go too far. And the point when you need a cart to trundle your own chest along, that’s probably a little too far.