NOTE: Please see bottom of our main page for submission info. Thank you. 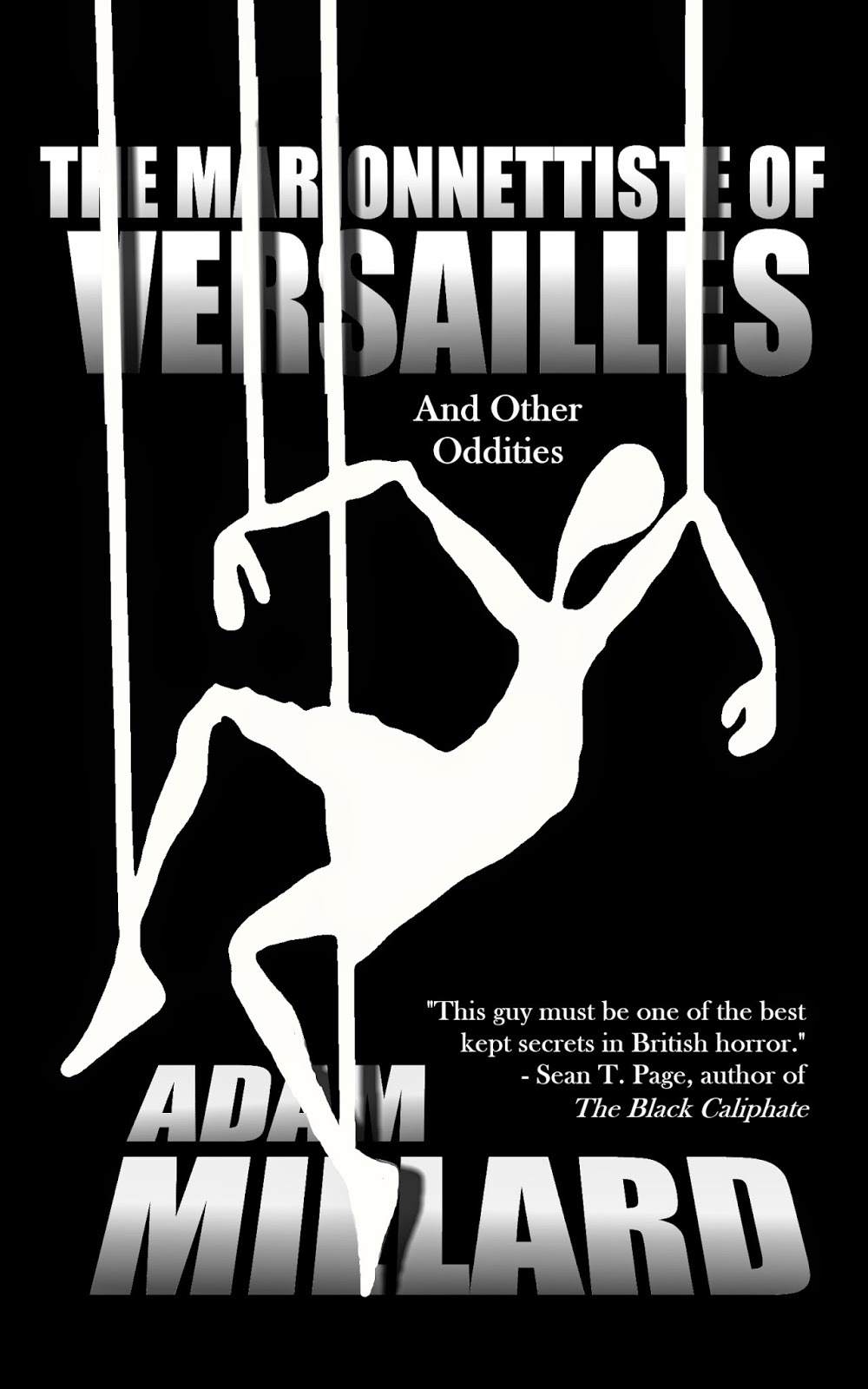 I confess, I picked up this collection on a whim without realizing it was by the same author responsible for the holly-jolly-bomination of THE HUMAN SANTAPEDE … my delight and surge of anticipatory confidence upon making that connection was substantial.

And it was not in vain. While the stories herein do not go for the same all-out outrageousness, they are all gorgeously written and contain several gem-like moments of description and artful turns of phrase. If a few of them do turn out the way you might expect, they do so with smooth style. The ones that don’t, the ones that throw in some twists, are creepy-good fun.

With 25 such well-done stories to choose from, I found it harder than usual to single out only a few favorites. “Lythalia Calling” is definitely high among them, though. It’s a beautiful piece about a man who sees a strange girl dancing in his garden midnight after midnight, and what happens when he finally decides to approach.

“Hair” is one with the above-mentioned twist ending; it’ll keep you guessing and second-guessing, even though you’re sure you know, right up to the finish. So is “What’s She Got That I Haven’t?” in which a two-timer thinks he can get away with hosting both ladies at the same party.

“Bug Boy” is compellingly nasty, sickening but somehow hard to look away from. And “Sparrows” would have been right at home in my Teeming Terrors anthology; I loved the vivid, visual, visceral scenes of fluttering, pecking carnage.

“7:17 From Suicide Station” is, itself, a lot like the train in the story … a building tension like gathering steam and speed on its inexorable one-way course. By contrast, “Nyogtha of the Northern Line” is another kind of train story altogether, part Barker and part Lovecraft but ultimately something else altogether.

In “Food of Love,” the relationship between a devoted husband and his bedridden wife conveys the oddest, most unsettling overlap of sentimentality and revulsion. Try and say, “Awww!” and “Eeww!” at the same time. Not easy. But this one invokes it.

The stories here range from history and mystery to sci-fi and otherworldly, a nice mix of something for everyone … provided ‘everyone’ is maybe a little morbid or bent … then again, well, aren’t we? 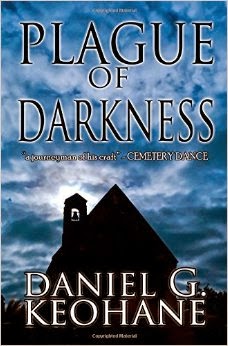 Gem Davidson's new neighbors live in a house that was once a church called Saint Gerard's. It had been closed down by an Episcopal bishop eight months earlier, its altar removed in a "deconsecration" service. While not religious, Gem wonders how a church could be taken away so easily, and wonders what the inside now looks like.

But when Gem and a few others (including Saint Gerard's former pastor) visit the new home of Bill and Seyha Watts, they find themselves surrounded by an invading darkness so deep they're unable to leave ... until they begin to confront ghosts from each of their pasts. But even when they begin to reveal their secrets, the darkness grows, causing them to question whether or not they may already be in hell...

Keohane's latest religious-themed thriller will make those afraid of the dark squirm in their seats, as he makes darkness (both literal and figurative) as creepy as Lucy Taylor made the abscence of sound in her classic short story 'The Silence Between the Screams.'

PLAGUE OF DARKNESS is easily Keohane's best novel to date. It's a solid, intelligent horror novel that will have you thinking long after you finish it. 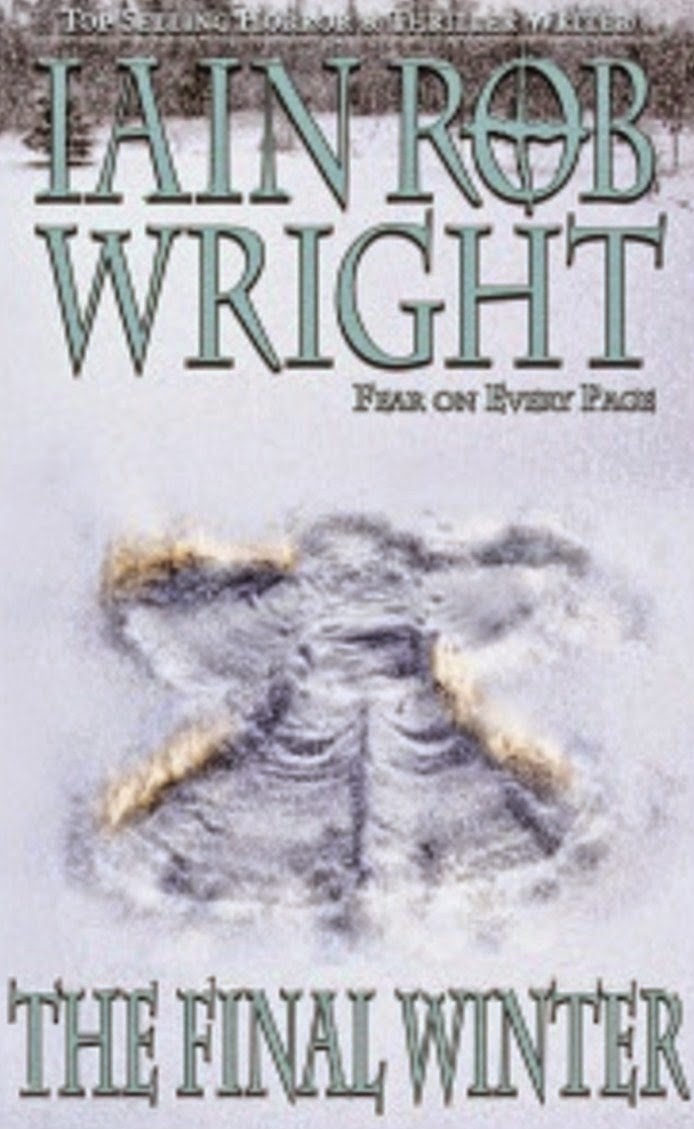 There are so many, many ways our world can end … and Wright seems to be having a lot of fun working his way through the list. And since I can’t get enough of that kind of thing, I’m happy to keep right on reading along.

The culprit this time is the cold, a global deep-freeze in which it just suddenly starts snowing. Everywhere. Never mind climate or season or any of it; just cue the inexplicable blizzards! It’s The Day After Tomorrow but bigger, taking over both hemispheres. Though, in this story, the larger scope of the rest of the world is pretty well left to fend for itself off-screen.

The focus stays up-close and personal on a struggling English neighborhood. With the roads closed, the power out, and the phones not working, those stranded at their shops seek refuge at the local pub along with the bartender and her regulars, and the odd jovial stranger passing through.

It is not the most convivial gathering right from the start. Even if these were all folks who enjoyed each other’s company under normal circumstances, well, these are anything but normal. Tensions pile higher as the snowdrifts do. Personalities clash. Secrets and resentments fester. Backstories unfold in skillfully-handled twists and layers. They’re running low on fuel for the fireplace, not to mention food. The beer is going frozen solid.

As if all that’s not recipe enough for trouble on its own, the weirdness leaps to new levels. Some survivors come in with tales of seeing bizarre, deadly figures in the storm. Eerie flames appear to dance atop the snow. Hallucinations, they’d like to think; delusions brought on by the stress and the extreme cold.

Until a mangled, bloody body comes crashing through the window with an ominous message carved into its flesh, and the people trapped in the pub realize they are rapidly running out of time. Survival might not be an option, let alone salvation.

A chilling read in more than one way, perhaps best enjoyed while bundled up in comfy jammies by a cozy fire, with a nice big mug of something warm. 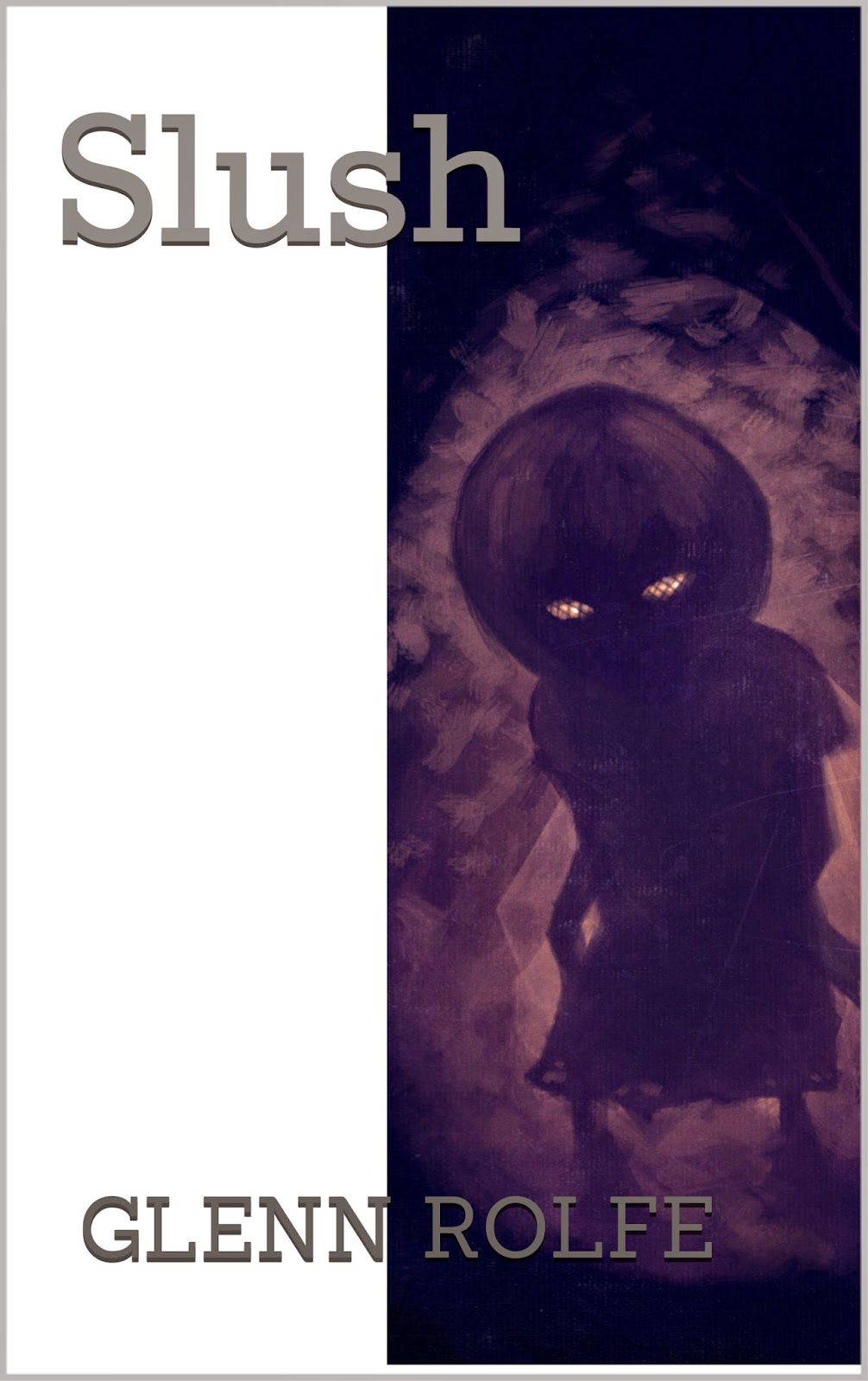 This is a collection of twelve short horror stories by a relative newcomer in the genre. From gross to somewhat poignant, there is something for everyone who is a fan of horror fiction. And while many of the stories are predictable, they are written well enough for even a jaded reader to enjoy.

The first story, ‘Skull of Snakes,’ is a cursed-object tale, but the characters make the reader care about what happens to them. It’s the summer of 1989 in a small town, and a group of friends are hanging out at the train tracks when one of them finds a coin. Soon after, tragedy befalls them, and they try to find out the coin’s history and what is happening to them.

‘The Curse’ reminded me a bit of the film THE CRAFT, with teen girls who are wronged and plan revenge. It’s a little far-fetched, but still a fun read.

‘Something Lost’ is a sweet, tear jerker tribute to the author’s father, lost at too young an age. Sad, but also moving and sweet.

Anybody who has had severe acne will feel both sympathy and horror for the title character in ‘Henry.’ While seeing a dermatologist would have been Henry’s best bet, he takes care of the problem in his own twisted way.

The rest of the stories are enjoyable, some disturbing and twisted, but nothing wrong with that! If you’re looking for a new author in horror, Glenn Rolfe is a good one to check out. 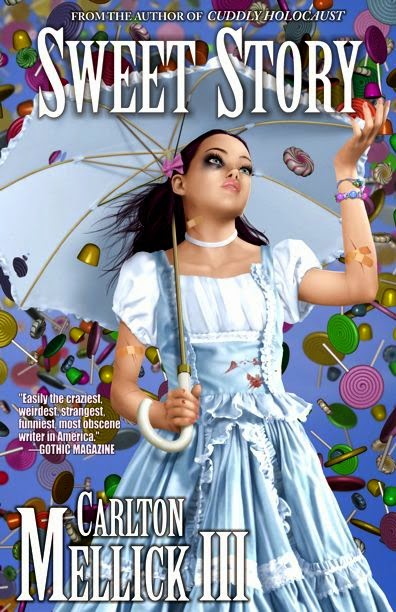 The author’s introduction warns that, despite the innocuous title and charming cover, this is not a children’s book. Do believe him, and how! SWEET STORY takes a simple wish, generous in spirit, and extrapolates it into a cataclysmic nightmare extinction event.

Things start off idyllic enough, at least for little Sally. She’s a happy girl, maybe a bit spoiled by her whimsical daddy, maybe a bit neglected by her aloof mother and ignored by her totally-goth-and-stuff teen sister … but she’s got dollies with the secret abilities to move and talk .. and she loves nothing more than to chase after rainbows.

One of these days, she’s sure, she’ll find the end of a rainbow, which is where magic happens and wishes are granted. When that day comes, she’s even willing to follow it into the blurry, sad part of town, and to put up with the obnoxious lazy fat boy from next door tagging along (though she’s very much not thrilled with the wish that HE makes).

The poverty and despair she found in the blurry part of town makes Sally all the more determined to do something nice. So, when her chance comes, she wishes for something she thinks will delight everyone – that it will rain candy! What could possibly be bad about that?

At first, she’s not sure it worked. Days go by without any rain at all. But then, strange clouds appear in the sky, and the next thing she knows, candy comes raining down. People are loving it! Dancing and cheering, scrambling to scoop it up from the streets like kids at the world’s biggest pinata party –

Except, well, it does rain kind of hard. You think hailstones are bad? And there are limits to the amount of candy anybody can eat before feeling sick; even four-year-olds given free rein on a Halloween trick-or-treat bucket are going to have their fill sooner or later. Not to mention the widespread panic, ecological effects, and societal collapse that soon follow.

This one goes to some dark, very dark places. However insidiously sinister and creepy you may have considered Willie Wonka (original book and Gene Wilder film versions), it’s not got much on this beautiful black-humor twist on ruining innocence and destroying dreams.