NOTE: Even after our summer hiatus, our To Be Reviewed pile is still a monster to be tackled. Please see bottom of our main page for submission info. Thank you. 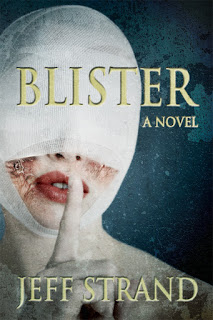 When cartoonist Jason Tray is ordered (by his agent) to get some rest and relaxation after a practical joke goes a bit too far, he never could have imagined the events that would soon unfold. While at his agent's isolated cabin, he meets a couple of locals in a bar and takes them up on their offer to go take a peek at "Blister," the nick name of a hideously disfigured girl who lives in a shed on her dad's property. He is genuinely shocked when he gets a look at her, but later that night at his hotel room, he begins having a guilt trip and decides to go apologize the next day.

Not only is Blister's father not happy to have visitors, but against all odds Jason finds himself falling for her. We find out her name is Rachel, and Strand slowly reveals how her face became so hideous.

BLISTER is a romantic comedy that's on the dark side: it's a serious romance as seen through the eyes of Jeff Strand, so don't expect things to be too normal (or serious) on every page. There are some hilarious moments, plenty of small town conspiracy, and a heavy dose of suspense, culminating in a satisfying conclusion.

This is my favorite novel from Strand since PRESSURE (2006) and I couldn't recommend it enough. 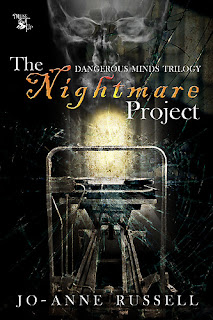 You know you’ve worked in psych facilities too long when you’re thinking the way they run this place is pretty hinky even for an asylum secretly fronting for evil genius mad science experiments. The staff at Willow Creek could stand to brush up on their policies and procedures, as well as confidentiality, record keeping, and medication protocols.

Not that Julia, admitted after killing her husband in a fit of night-terrors, particularly cares about any of that. What she cares about is when and if she’ll be able to see her children again, and whether it’s possible to rebuild their severely damaged relationships. But she soon begins realizing there are other things going on at the asylum, things more sinister than the usual therapy and treatment.

Things like disappearances, and deaths, and unexplained transfers. Like Kaitlyn, the little girl who supposedly died a few years ago but who’s communicating with Julia, trying to help her plot an escape. Anxious to get out before her own kids are taken away from her for good, she goes along with what Kaitlyn wants … even when what Kaitlyn wants turns toward revenge.

Unfortunately, overall, this book just didn’t do it for me. The plot had potential, but I found the characters kind of flat, the dialogue stilted and unnaturally precise, and it could’ve used some editorial polish throughout. 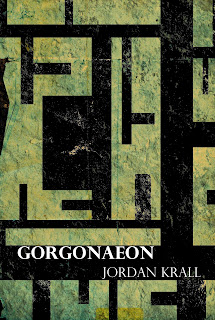 Like his FALSE MAGIC KINGDOM series, GORGONAEON is a dazzling, surreal, nightmarish head trip. Characters and events come in and out like a hazy daydream, and as things are eventually uncovered the author delivers some serious chills.

While difficult to describe, the book centers around Philip, a man dealing with some severely strange childhood traumas. He's constantly late for work as he makes a mental (and perhaps even physical) path through this demented landscape. Symbolism and metaphors clash at every turn. There's also mention of a mysterious motel that has appeared in other Krall stories (this book itself is a precursor to a novel titled MEDUSA) and Philip's blending of alcohol with his medication leads to more weirdness that will either charm the reader or scare the timid away.

Weird fiction just doesn't get any better than this. 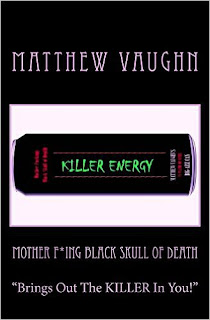 The thing about energy drinks containing certain bodily fluids of male bovines is an urban legend and a debunked one at that. An amino acid, okay? Just because it has the word ‘taur’ in it … but anyway, we digress.

Because, in this book, some unexpected extra additives have made its way into the latest batch of MFBSD. Oops. A little attempted product tampering gone wrong, but they probably caught it before any shipments went out. Right? Right. Sure, boss. Right.

Meet Vince, Jeff, and Craig. They’re the reigning badasses of their town, bullying and beating up on whoever they like. It’s a fast-paced, demanding lifestyle, so, to keep up, they need lots of high-octane MFBSD. If these cans fresh off the truck taste a little weird, so what? And if, shortly after, they find themselves bulking up into behemoth inhuman rage-monster sex-brutes, well, so what to that, too? Now they can really raise some hell around here.

What they failed to reckon with was ones wit one of their victims, to whom as a joke they’d force-fed a wallop of the energy drink … shortly after he’d had his own little lab accident, throwing more chemical compounds into the mix.

It’s pretty much slam-bang wall-to-wall action, a raunchy and violent rampage from start to finish, crass and tacky and gross, as nasty as anything and a howling supercharged kick in the funnybone. If, that is, you’re into crude lowbrow splat and laughs. If you have even a smidgen of class, this book may not be quite for you.

My only quibble is one I’ve had before in regards to this publisher … a few ads at the back is all well and good, but 25+ pages of catalog goes way, way too far. Especially when the total page count is 130 or so. But, for the author and the story? Definite thumbs up! 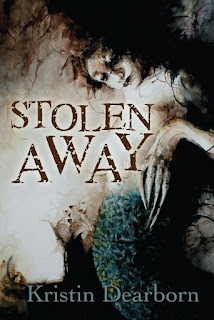 When Trisha's son is kidnapped, her daughter claims she saw a monster take him. Aided by her ex Joel, they go looking for young Brayden in the seedy drug and nightclub underworld where Trisha had met Brayden's father.

The man Trisha had a one night stand with also happens to be a demon, one who lurks in the shadows of the nightlife scene, looking for women to continue his half human/half demon species (he even has a big tattoo on his back that says DEMON just in case anyone doubts him!).

But Trisha isn't like his other victims, especially when she is befriended by a self appointed gothic exorcist (I know that sounds silly but trust me, Dearborn makes it work). As Joel's mom keeps watch over their daughter, Trisha and Joel deal with their troubled, addictive pasts and do what they need to do to defeat this supernatural creature who has invaded their lives.

STOLEN AWAY is an action packed read, perhaps a bit more on the fantasy side of demonology, but a fresh take on the subgenre however you slice it. Add a major plus here for the COOLEST way I've ever seen holy water dispensed. Check it out... 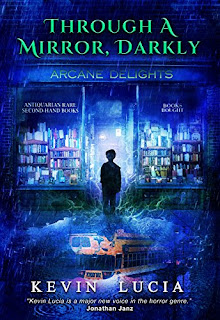 Some months ago, I reviewed the first of Kevin Lucia’s Clifton Heights books, likening it to a collection of strange and beautiful beads strung together into something all the more fascinating. I knew I’d be eagerly anticipating a return visit to this peculiar little town, packed with its hidden secrets and stories. Would it hold up? Would it improve upon?

Yes, and yes! As jewelry goes, this piece is less a string of many small beads and more a necklace of larger chunks of polished amber. Each is larger, unique in its shape and individual coloration, yet similar enough in type and tone to form a cool, smooth, harmonious blend.

In yellow. Deepening shades of yellow. Because these stories have something else in common besides Clifton Heights, besides the clever frame narrative in which they are discovered and read, besides the recurring characters. A theme wends throughout, a theme of pallid masks and black stars and a certain evocative Sign.

Our discovering reader this time has inherited a bookstore called Arcane Delights, and is in the process of preparing to reopen for business when a mysterious box of mysterious journals. Their contents appear to be fictional … but contain familiar places, familiar names … allude to events in the town’s past never really explained …

Such as a troubled priest-turned-teacher who escaped a brush with evil in a faraway country, only to suspect whispers of it exist far too close to home. Or a cab driver lacking direction in his own life but finding a dark calling seeing others to their destination, or a carnival crossroads of memory and second chances.

Of the four story-stories, the all-out creepiest is “And I Watered It, With Tears,” which is so well-done and visual I had to sternly convince myself that I’d read it, not actually watched it. Chilling, moody, atmospheric, emotion-laden, tragic, and downright scary.

These are each, in their own ways, tales of the lost. Lost faith, lost future, lost family, lost sanity, lost hope, lost Carcosa. Of course, you don’t HAVE to be a Chambersian heretic like me to enjoy and fully appreciate this book, but, hey, it sure helps! 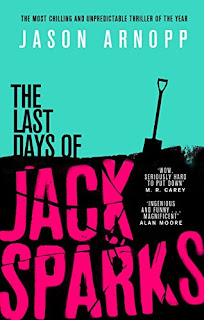 Best selling author and journalist Jack Sparks is working on a new book that deals with the occult. He's an alcoholic cocaine fiend, and a major skeptic. So he travels to Italy to witness a live exorcism, and while some strange things go down, he still isn't convinced of the supernatural. Even when a book comes into his possession (that's not to be published for a couple of years), a book written by the priest who performed said exorcism. A book that tells of his Jack's fate...

Sparks goes on to interview a group of ghost chasers in LA and another paranormal investigator in Hong Kong, all who become key players in his investigations. There's also a growing love story between Sparks and his roommate Bex, who becomes tangled in Spark's weird new obsession. And all hell begins to break loose when someone hacks and posts a video to Jack's YouTube page, a video showing a ghost that's so realistic it almost drives him mad trying to discover the truth behind it.

THE LAST DAYS OF JACK SPARKS is a near perfect blend of horror and humor. There are several genuinely frightening scenes, and Arnopp's prose moves so smoothly I finished it in two manic sittings. The book is told from Jack Sparks' point of view, but there are side notes from his brother Alistair that gives the book the feel these events actually happened. Among the surprises, three real life movie directors have cameos here, giving the book and even more "authentic" feel.

Some of the possession scenes are as intense as those in Michael Laimo's fantastic 2005 novel THE DEMONOLOGIST, and Arnopp's sense of humor enhances the story instead of dragging it into parody territory. While the main reveal here reminded me of the wicked twist in David Lynch's 2007 film INLAND EMPIRE, the author makes it his own and blends possession and time travel into something fresh and exciting.

I doubt a more entertaining book will be released this year. Don't miss it. 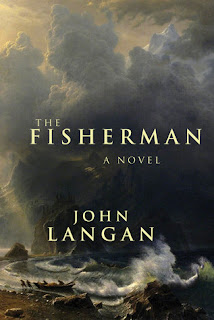 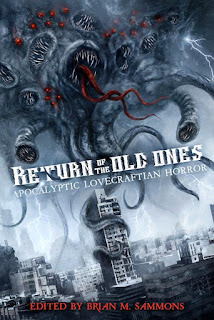 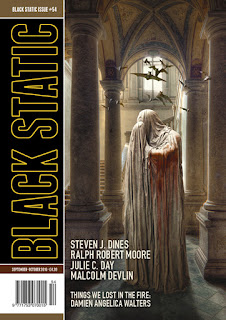