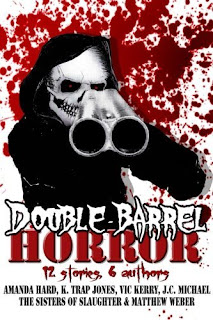 What a nifty idea for a project! Assemble a crew of solid heavy-hitter horror writers, have them do two stories each, and come away with a full dozen tales of the extreme, the gory, the gross, and the violent. Which, hey, is right up my alley, and I'm pleased to report that they don't disappoint. Each is its own sick journey into wrongness.

Amanda Hard turns what initially seems like just another predictable blind date into something even more twisted ... then brings a fresh take on a classic, when a mother's devotion and careful wish fulfillment leads to unexpectedly dark places.

Next up is K.Trap Jones, who manages the near-impossible by making the reader almost feel sorry for a clown ... almost ... and takes a grown man on an adventure to learn the even-worse truth behind a childhood rural legend.

Vic Kerry looks at some perils of parenthood and pregnancy with both of his contributions, one of which has a young couple preparing for their unexpected little bundle of joy ... while in the other, a man gets a surprise visit from the daughter he might have had, and she's not happy.

Then comes a dual dose of dealings with devils, courtesy of J.C.Michael ...whether it's making sure bad people get what they deserve, or discovering the true source of ultimate evil behind the horrors of war and life's cruelties.

The powerhouse Sisters of Slaughter are at it again, hitting close to home twice ... whether it's pitting cops against something much worse than a simple robbery, or confronting the landlord about all those aggravating problems with the rental.

Matthew Weber finishes things off with two tales of people getting what's coming to them ... three guys try to escape a revenge curse (one which, as a pet-lover, I found it hard to argue with), and a couple of bullies have a turn of bad luck. 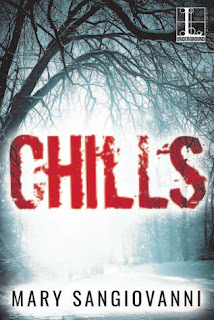 Part of why I chose now to read Chills was, admittedly, psychosomatic ... a prolonged heatwave for which Portland is not prepared left me desperate for alternate ways to cool off. So, how about some suggestibility? Winter horror! An entire town in the grips of an unnatural freeze, all ice and deep snow!

And, thanks to Mary SanGiovanni's flair for immersive description, it helped! There were shivers! A slight drawback being, since this is also a horror novel filled with creepy eldritch frostbeasts and rime monsters and cold-blooded cultists, there were those kinds of shivers as well.

Strange weather has taken over all of Colby. Not just a late unseasonable quirk, a final flurry before spring. This is severe, nearly Fimbulwinter-level stuff. Schools are closing for snow days when kids should be getting ready for summer vacation. And to top it all off, an anonymous ritual-murder victim has just been found.

For Detective Jack Glazier, that case is only the beginning. He and his team soon find themselves dealing with way more than a few little ceremonies and sacrifices. It's not wrong to say that the whole world and all of humanity might be at stake. Not to mention the lives of Jack's family and friends.

For occult expert Kathy Ryan, it's also personal ... requiring her to confront a demon (literal or figurative? you be the judge!) from her past and threatening a hope for happiness in her future. She's going to need all her strength and arcane knowledge to stand a chance.

A gripping, and dare I say, chilling read from start to finish, colder than cold coldity-cold cosmic horror with the indescribable beautifully (and terrifyingly) described, Chills definitely delivers for super cool summer reading. 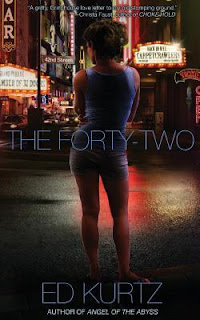 It's 1979 in New York City. Charley is addicted to seeing horror double features on 42nd Street, and travels quite often to be there from his downtown apartment. During a screening at the legendary Harris Theater, a beautiful woman sits next to him and before he fully realizes what has happened, she is stabbed in the back, right through her chair. What follows is a noir-type tale that brings Scorcese's AFTER HOURS to mind, as Charley, unable to let this murder go, does what he has to to find out who the killer is.

While at first I thought, why would he even care, considering she was a stranger, I believe it's Charley's love for The Deuce (a.k.a. 42nd Street) that leads him on this wild solo investigation that takes us to the seedier sections of the Manhattan of yesteryear. Besides, he's the clerk at a run down hotel and on occasion helps with the sound on b-movies for little moolah, so it's not like he has a lot going on.

Kurtz brings in all kinds of sleazeball (and some stand up) characters, including an unusually nice prostitute, some Serbian gangsters, and a couple of cops who bring humor into this mainly lurid tale.

For those who long for the days of Times Square's sleaze-era, THE FORTY-TWO will surely make you smile with it's descriptions of cinemas, films, and the general feel of the time, and under Kurtz' well-guided pen, those into crime/noir-ish stories will surely enjoy Charley's plight, which culminates in a satisfying finale. A fine non-horror novel by a beloved horror writer. 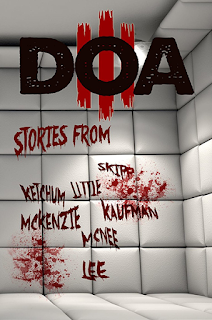 Oh wow but this is a whole hefty lot of messed-up right here ... this is some of the hardest of the hardcore, putting the triple-X in extreme. Thirty stories from thirty-plus of the genre's wickedest minds and bloodiest pens.

A scan of the TOC, or even the cover, is a who's who of names known for unleashing utter atrocity. Splatterlords extraordinaire like John Skipp, Jack Ketchum, Wrath James White, Edward Lee, Shane McKenzie, Ryan Harding ... rising stars like Kristopher Triana, Betty Rocksteady, K. Trap Jones ... legends like Matheson and Little ... unexpected treats courtesy of Jeff Strand and Hal Bodner ... and so many more!

Seriously, check your sensitive sensibilities at the door. Even the most seasoned sicko will find things within these pages to marvel at and recoil from. At least, I sure did. It's sex and violence from the get-go. Taboos mean nothing to these people, nothing except maybe a hold-my-beer kind of challenge.

Have to tip the hat to "Skipp's Splatterpunk Alphabet Souffle," of course, y the inimitable John Skipp. It gives a literal A-to-Z of snippets, some fiction, some essay, some just quick nuggets of wisdom from the genre's coolest cool uncle.

I got particular chuckles from Jeff Strand's "Hostile," a brief and hilarious look at an unseen aspect of torture-porn. Hal Bodner, in "L'Amuse Bouche," blasts his usual reputation for more light-hearted humor/horror completely out of the water.

Must also give props to "Proud Papa" by Adrien Ludens, for a ghastly entertaining look at the joys of fatherhood ... and Christopher Weber's "Taking Root," for major visceral squick-out ... and Jaap Boekestein's gorgeously imagined "Metal Heat."

"Junk," by Ryan Harding, will have you wincing forever even if you don't have guy-parts. Garrett Cook's "Woeful City" will bend your brain into pandimensional shapes.

There really are way too many excellent pieces in here to single them each out; I mean, it's basically the entire book. If you like boundaries trampled, transgressions gleefully transgressed, the offensive and unthinkable splashed right there before your very eyes, this is definitely one for you! 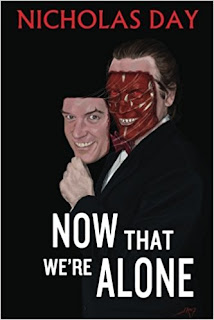 The cover art here, by demented genius Jim Agpalza, is creepy in many, many ways. The longer you look, the creepier it gets. The same can be said for many of the stories in this collection, each of which also features a bonus illustration by Luke Spooner.

The eleven tales contained herein run a strange gamut, the tone of weirdness well-set with the opening catchy-poetic flash fic "This Is Why Johnny Is In Therapy Now," which is almost cheery in tone even as it describes an awful scene.

From there, things take a colder and grimmer turn with "The Ghosts In Winter's Wake," as an old man with a failing memory tries to make sense of tragedy and loss ... but then shifts gears again to B-movie nature run amok monster carnage in "Chomp Chomp."

"Jacks" was one I'd seen before because a friend has a story in the same evil toys anthology where it first appeared, but it's still as enjoyable the second time around, and took me back to my childhood where I never could get the hang of those dratted things anyway.

Is it wrong that, as I read "Beast Mode," I kept thinking it was like what would happen if someone made a gritty reboot of the horror movie they're watching at the beginning of Thriller? The nice young couple, but suddenly bikers, and bloody revenge mayhem?

"Bright Red Mess" is one of my personal favorites here, full of family dysfunction and a lot of really uncomfortable broken glass imagery. I also quite liked the concept and execution of "Negative Space;" like it inspiration, the epiphany just suddenly clicks.