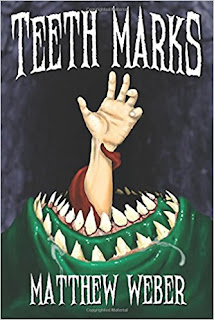 That moment when you pick up something by an author whose name is familiar from social media circles but not much of whose work you've yet read until recently, figuring hey let's give it a go ... and before the first story's done, you're wondering what the heck took you so long, look what you've been missing!

Each of the twelve offerings in this collection is just knock-down drag-out crazydamn good. I was reminded in all the best ways of Bentley Little's short stories, that relatable modern Americana feel, the kinds of things that could happen in anybody's town ... or neighborhood ... or very own home.

This was another where trying to narrow it down to my favorites was a real challenge, because there are no duds in the bunch. But I'll try.

"The Red Card," in which Carol keeps finding inexplicable and unwanted messages in her new apartment, cranks up the paranoia to terrific intensity ...

"Suburban Facebreaker" because small-scale bickering escalation and my aunt used to live in a house with front steps like that ...

"The Neighbor At The Curb" for all those times you've wondered just what the heck they're throwing out and been tempted to take a trashcan peeksie ...

"Cookies" for the little animal-befriender kid in us all (sometimes to our parents' horror) ...

"Louise, Your Shed's On Fire;" rather than Bentley Little so much, this fun one gave me more of a Janet Evanovich vibe and I grinned all the way through ...

"Of All The Nights," when a home invasion goes wrong thanks to greater dangers ...

And I better make myself stop there because I've already listed half the table of contents! See? See how it is? See what I mean? These are all just too crazydamn good! 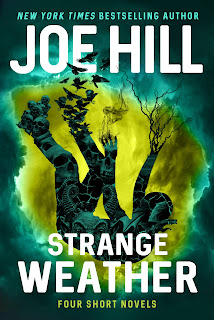 These four short novels (I guess that means a tad longer than a novella?) feature two supernatural stories, a wild scifi romp, and a drama that is perhaps the most unforgettable piece here.

In 'Snapshot' a man recalls his younger days as an overweight nerd who spent much time with his elderly nanny. He helps her in his teen years as she becomes the target of a strange man whose Polaroid camera robs people of their memory. I read a slightly shorter version of this in last year's special Joe Hill issue of Cemetery Dance magazine, and it's a powerful way to start off a collection.

In 'Loaded,' a brave female journalist, a mall security guard (with a bad military history and an itchy trigger finger) and a jewelry store owner (with his slightly pissed off mistress) eventually meet in this drama that the author claims is his attempt to understand our "national hard-on for The Gun." Sure, it's a bit political, yet by the end Hill may just win some people over, or at least cause them to rethink their position. Timely, important, and best of all completely thrilling, this is the longest tale here yet I read it the quickest.

Despite being scared to death of heights, I somehow made it through 'Aloft.' Aubrey (he the lone male in a musical trio) joins bandmate Harriet in a skydive to commemorate the passing of their lost member, June. Aubrey is petrified of heights but joined the dive due to his secret love for Harriet and a rashly made promise. When the moment of truth comes, Aubrey realizes he just can't do it, but the plane malfunctions and he has no choice. Along with his jumping instructor, they land on a bizarre cloud-like formation...just 38 feet below the plane. My stomach felt like it was going to drop through the entire length of this wonderful (although scary as it gets) story where the ending just might make you wonder if everything you just read was all in Aubrey's mind.

Finally, Hill delivers a riff on his novel THE FIREMAN with 'Rain,' an apocalyptic scifi romp that has a few funny moments, but they don't take away from the horrific goings-on. Honeysuckle (you have to love that name) is thrilled her girlfriend Yolanda is coming to move in with her, with her mother along for the ride. But before they can begin their lives together, the sky turns black and not only Honeysuckle's suburban neighborhood, but all of Denver is hit with a downpour of gold and silver spikes, shredding everyone in their path. We eventually learn this occurrence has affected the entire world, and that it's the work of scientists. Most of the story follows Honeysuckle as she travels to Denver to find her girlfriend's father, along the way meeting some choice characters (the best being part of an insane end times cult who happen to live on her block). When we're not laughing at this group, we're cringing as people attempt to get around in the needle/nail-filled landscape. End times fans will eat this one up, and hopefully terrorists won't attempt to pull this off!

STRANGE WEATHER is a fantastic collection, filled with solid stories and characters anyone can identify with. I've read everything Hill has put out, and while I like most of his novels, I think his short stories and novellas are his strength. You'll rip through this in no time. 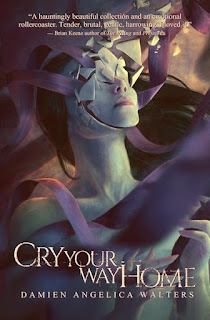 Okay, now, with this one I knew what I was getting myself into, because I've been enviously admiring everything Damien Angelica Walters has done for many years now. Her style is sumptuous decadence, her storytelling skills are exquisite, she has a deft knack for folklore and underlying mythology, and is one of the best of the best when it comes to reimagining classic fairy tales.

You might think that last bit has been done to death, that there's nothing left, the once upon a times and happily ever afters all played out. But you'd be wrong. Just look at "Tooth, Tongue, and Claw," the opener here. Forget Disney, animated or live-action remake. This is a take on Beauty and the Beast like you've never seen, far from musicals and romance.

Many of these stories are female-focused, which is also fitting because women were the original tellers of those old tales. Cruel girls, wicked stepsisters, mothers and daughters, the darkness, the viciousness, coming of age, monsters, pain and change and shame and secrecy, loss, the prices we pay for love and survival.

I found "S Is For Soliloquy" to be a delightful surprise, and if it seems a departure, think again ... superheroes are our form of modern mythology. "The Floating Girls: A Documentary" is deep-down haunting. "Little Girl Blue, Come Cry Your Way Home" is post-partum terror, while "In The Spaces Where You Once Lived" touches on many peoples' worst fears.

Really, the only barely-a-critique I can come up with is that, when you read them all back to back, you might notice some recurring traits cropping up through several stories. The fingernails to palm thing, the pinching the bridge of the nose thing. But again, only because I read the whole book almost in a single sitting.

So, yes, another absolute winner from one of the best voices out there. Don't miss out! 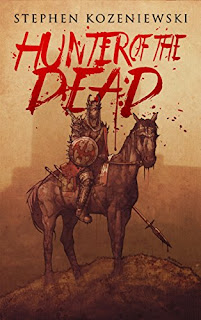 It's been 20+ years since I last played Vampire: The Masquerade, and the campaign was short-lived even then ... but danged if this book didn't make me nostalgic for it! Which surprised me, really; there've been about ninety bazillion vampire novels with the houses/clans all scheming and intrigue and political infighting, and those made me never want to play the game again.

So, Kozeniewski must (as usual) be doing something right. One aspect of it is that his vampires, for all their living among us controlling crime syndicates and whatnot, are decidedly not human. There's none of the angsty moralistic brooding, though they are civilized enough to do diplomacy and negotiations.

It also presents several nifty takes on vampiric origin, history, and abilities that I found tremendously entertaining. It's rare to see and makes for a fresh, refreshing change. And NO, it's none of that sparkly woo-woo business either. While not full-on 30 Days of Night vampirociraptors, these ones are wickedly cruel, savage, and monstrous.

But they also have rules, strict ones regarding status and succession and territory. And, where there are vampires, there are those who hunt them. The human Inquisitors, mainly ... as well as rumors of the legendary Hunter of the Dead, kind of the vampire boogeyman.

Or maybe not so legendary after all, as a lone wolf Inquisitor and a hapless kid from a convenience store are about to find out. They're soon caught up in a turf war of biblical proportions, entangled in uneasy conflicting truces, fighting ancient evils, and racing the clock before all of Las Vegas -- a city of night anyway -- is consumed.

I did stumble over a few minor consistency/continuity issues, but the characters were all engaging, their interactions fun, and the gore was top-notch. I'm definitely hoping for more in this universe, a direct sequel or prequels or side-stories focusing on some of the other vampire houses (Druids and Teslans in particular captured my interest, Koz, if you're taking requests!).