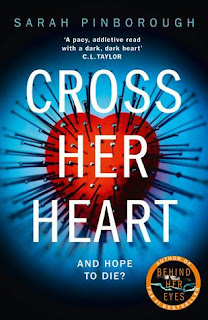 Pinborough, author of 2017’s stellar BEHIND HER EYES, returns with another psychological thriller jam-packed with enough twists and turns for at least three novels.

Lisa is a single mother, doing her best to raise 16 year-old daughter Ava. She tries not to mention Ava’s father and is hiding a dark past as she attempts to get on with her life. But she’s starting to find things that make her believe someone is on to her, and the fear her new life will be unraveled leads to a growing anxiety.

Ava lives for her freedom and her friends, and like a normal teen is waiting for her mother to cut the cord. A star on the swim team, she even has a boyfriend (of sorts) her mom knows nothing about.

When Ava goes missing, Lisa discovers a promise made as a kid had long lasting consequences, and that her only help may be in the hands of her friend and co-worker Marilyn, who is dealing with (among other things) an abusive husband.

With a crime committed at a young age back to haunt her, Lisa faces an issue from her past that may claim not only her life, but her daughter’s as well.

CROSS HER HEART is a look at trust, friendship, and a family damaged by the mind of a dangerous psychotic. Readers may figure out some of the twists early on, but Pinborough employs twists on top of those to keep you guessing into the final pages. The short chapters (and high suspense level during the second half) makes this a compulsive page-turner that should satisfy long time fans and keep Pinborough’s growing legion thrilled. 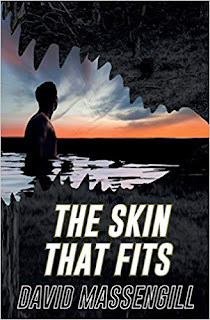 Freaky murder cult with rituals steeped in sultry Southern magic? A surprise suicide, a guilt-ridden fiancee, and a last request fraught with family secrets, questions, and emotional baggage? A hot and hunky model who worries his best days might be passing, accepting a movie offer on a whim? Missing persons, paranoia, people with weird alligator tattoos? Steamy, moody, brooding, turbulent?

Yes please! At least, in this case, yes please right up until the ending; there’s all this beautiful buildup, tension, conflicts, you’re there craving the big dramatic final confrontations and resolutions … but then it just ends almost out of nowhere. Abrupt, convenient, and unsatisfying.

Up until then, though, it’s a great read, richly humid with atmosphere, tense, packed with paranoia. The characters are interesting and well-rounded, tackling some difficult social constructs. Subtle but distinct Lovecraftian undertones weave throughout.

Kim is the guilt-ridden fiancee, who’d been about to call things off with Eustace anyway and pursue a relationship with pretty Malia, until Eustace’s sudden death and request for her to take his ashes to divide among his relatives leads her on a troubling journey from Seattle to the South.

Todd, the model, is also taking care of his ailing mother, and when he’s approached about a movie, he accepts even though he’s not an actor. He needs the work. He can’t afford to be reticent or suspicious, even when the apparent movie people sure seem to be going about things a peculiar way.

What Kim and Todd don’t know, but are each about to find out in dangerous ways, is that the cult has plans for both of them. Plans involving old magic, possession, the revered crone called Maman, her predecessor Grandpappy, and her chosen successor.

So, yeah, quality writing, intriguing story … right up until that abrupt ending. I was hoping for a much bigger finish. 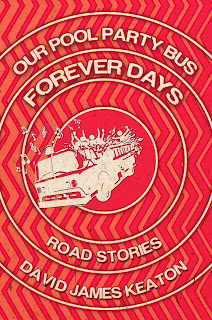 The intro alone is worth the price of admission; it’s about car chases, listing and providing mini-essays on many of the best cinematic car chases in history … besides, c’mon, he had me at The Hidden. Anyone who can’t agree that opening chase scene isn’t awesome, I just don’t know what I can say.

Chases, driving, road stories, cars. It all works because those themes wend their way throughout most of the stories. Many are connected and interconnected in sometimes obvious, sometimes surprising ways. Some are direct, some follow a more scenic route, some turn out to be unexpected shortcuts. Or there’ll be that sense like when you wonder if you’ve taken a wrong turn, only to suddenly find yourself back in familiar territory.

Several share recurring characters as well as a strongly (and vaguely unsettling) autobiographical-seeming component. ‘A true story’? ‘Based on’ actual events? Or ‘inspired by’? Yes, no, both, all, neither? Reading it felt a little like having a front-row seat inside the head of coherent madness; you can’t tell what’s real and what isn’t, yet somehow it ties together and makes sense.

The stuff with the ducks, and the fly … Zero the (maybe) cat … the body in the guitar case and the bridges full of locks … a purgatorial party-bus … the perils of picking up hitchhikers … stolen ears and forced perspective … turnpikes and tollbooths, morbid memorial crosses … some dusty-trail type road stories of the wild West … clown cars and carnival rides gone off the rails … the troubles that might ensue if license plates were phone numbers … there’s just so much here, so much, and all of it so weird yet weirdly compelling.

Compelling, not to mention skillfully handled. The second-person stream of consciousness dialogue exchange whatevers in “Bad Reaction Shots” made me have to sit back several times, shake my head, and just do some recovery reaction shots of my own.

I have no idea how much of “A Dull Boy” is factual; it’s about the guy who, as a child actor, played Danny in The Shining and the hassles his association with the movie have caused him throughout his life. It certainly feels like it could be, and even if it’s not, feels like it should be. 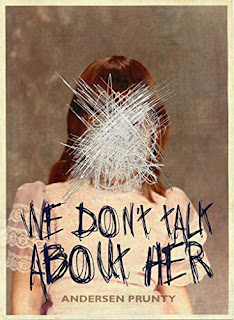 Hot off the horror press, here is another weird and horrific gem from an author that continues to shock, torment, humiliate, and entertain us with each and every creatively unique and original release. Yes, that is correct. I am talking about author Andersen Prunty and his new absurdly dark and demented tale WE DON'T TALK ABOUT HER, which is now available as an eBook or Audiobook. Now, don’t let the length of this put you off in any way, shape, or form, because trust me, although short, it packs quite a morbid punch to the ole’ gut and still manages to tell a much larger story within a very modest number of pages. The author continues to use his uncanny ability to unfold a devious plot, and, before it’s too late… BAM! We are doom-sucked right into the main character’s dead mother’s pelvis before we can even count to a rotting wet number ten.

Clint is a sociopathic stalker on the fritz of Venom energy drinks, bad outfits, and PTSD triggered by his dead mother. In fact, his deceased mother is actually still rotting and decaying and lying quite very dead on a bed within the confines of his home. But, Clint doesn’t really notice that she’s dead (she still talks to him and tells him what to do) until one of the females he stalks, flips the cards on him, and begins to stalk him instead. Stella, she’s in to win it, or steal all his government money (it’s kind of her thing after-all). Stella makes herself right at home and makes him get rid of the rotting corpse, gives him a hunny-do list while she’s off at work every day, as she continues to jump from relationship to relationship until her bank account is just as happy as she is. But, has she met her match here in this godforsaken house of putrid stench? What is she going to do? She’s not quite sure how much more she can even handle. Hopefully she can figure it out before it’s too late. Hopefully Clint decides to commit suicide and she doesn’t have to worry about any of it anymore (besides wasn’t he supposed to dispose of ALL the body? He can’t even do that right).

Hopefully she can hang in there a little longer. Maybe. Maybe then everything will be okay. But, maybe it won’t. Either way… WE DON'T TALK ABOUT HER. 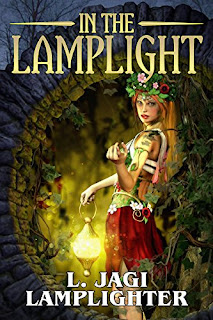 I thought at first this collection was going to be fantasy. Then I started reading it, and soon discovered it was that and more … darkly, beautifully more. The fantasy and historical stories are dark, the sci-fi ones are packed with gore and horror, psychological and social fears are deftly played with and preyed upon.

Several of the tales tie into the author’s Prospero’s Children universe, which extrapolates upon Shakespeare’s The Tempest and brings it up to modern day. Imagine Miranda, and her half-brothers and various other servants and associates of the household, putting their magic to good use as paranormal investigators and troubleshooters. A familiarity with her longer works isn’t required to read them, especially if you know your Bard, but may quickly become required after reading them because the characters, their world, and the supernatural menaces they face are well-imagined and very fun.

I particularly liked the way many of the stories speculated on uncanny causes, uncanny effects, and other ties between our common everyday ailments and the otherworldly. Less-obvious health hazards of dating a vampire, for instance, or the disturbing nature of changelings.

I also really liked the powerful maternal and feminine elements woven throughout; a mother’s primal instincts can manifest in many forms. It reminded me strongly of the undertones present in a lot of classic fairy tales. 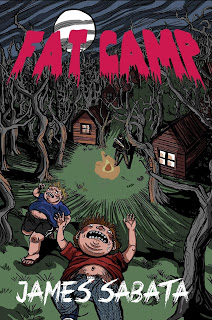 That’s how Philip McCracken is unhappily spending his summer. He’s hating it, he’s not good at it, he’s hardly losing any weight. He’s a regular target for bullying. To make things worse, the best friend who accompanied him is doing great, breaking the camp records.

He’s had enough. He knows he’ll never stand a chance with the cheerleader of his dreams. When his sister comes to visit over the weekend, he’s planning to bail and have her take him home. But, poor guy, the universe has other plans. Including his sister bringing a surprise guest: that pretty cheerleader.

Soon, campers and counselors start disappearing or meeting gruesome ends. Can Phil survive? Can he become the camp’s most unlikely hero, save his friends, even get the girl? Or is he just another fat loser about to die?

A painful riot from start to finish, full of humor and hack-slash-blood-guts horror … but also hitting many a sensitive nerve and awkward memory for anyone who’s ever felt like a misfit or an outcast. 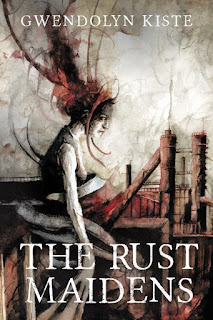 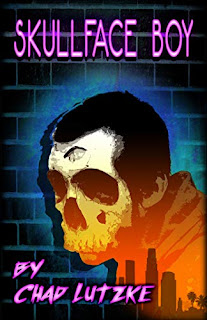